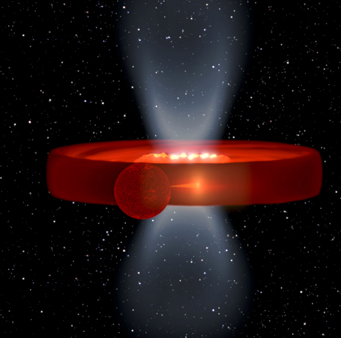 A still from the animation below shows the M dwarf star donating gas to a thick disk that feeds the hidden black hole. In the inner disk, a donut-shaped structure of gas has formed that blocks the light from the innermost regions.

In January 2011, the Swift satellite’s Burst Alert Telescope caught a faint X-ray flare that turned out to be the signpost of a most unusual binary system. Jesus Corral-Santana (Instituto de Astrofísica de Canarias and Universidad de La Laguna, Spain) published their analysis of Swift J1357.2?093313 in yesterday’s issue of Science, showing that the system consists of a red dwarf star zipping around its companion black hole every 2.8 hours, one of the shortest periods ever recorded for a black hole binary.

When giant stars reach the end of their lives, they explode in a spectacular fashion, flinging their outer layers away in butterfly-like wisps while the inner layers implode to a darker fate. In Swift J1357, this dense, imploded core has three times the mass of the Sun, meaning it’s definitely a black hole. Long after the surrounding wisps of gas flew away, the companion M dwarf star donated gas to a thick disk that feeds the black hole. The visible light and X-rays seen from this disk give away the presence of the black hole lurking inside. Astronomers have confirmed 18 of these black hole binaries in the Milky Way galaxy, and another 32 candidates exist.

Further observations with several telescopes in the Canary Islands showed Swift J1357 was no ordinary binary system. As it took follow-up visible-light images and spectroscopy, Corral-Santana’s team watched with some surprise as the system went through a series of dips, fading by up to 0.8 magnitude every few minutes. The dips in brightness are much shorter than the orbital period, and oddly enough, the dips came at progressively longer intervals over a roughly two-month time period, first every 2.3 minutes but eventually every 7.5 minutes. Whatever was blocking the light was also moving away from the black hole over time.

So what is it? (No, it’s not an alien spaceship.) The blocking structure could be a warp in the gas disk feeding the black hole. In this case, the evolving dips might come from a wave propagating through the disk. But the authors prefer an alternative scenario, in which an irregular, doughnut-shaped gas cloud blocks the light from the accretion disk inside it. Watch the animation describing the latter option below: