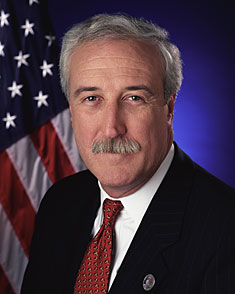 Sean O'Keefe was appointed NASA's 10th administrator by President George W. Bush in December 2001 and announced his resignation exactly three years later. His term was marked by the Columbia disaster and investigation, a major reorganization of the agency prompted by the president's Moon-Mars initiative, and controversy over the future of the Hubble Space Telescope.

NASA administrator Sean O'Keefe announced his resignation late yesterday in a letter to President George W. Bush. He cited the financial pressure of family life as his reason. "The first of three children will begin college next fall," he wrote. "I owe them the same opportunity my parents provided for me to pursue higher education without the crushing burden of debt thereafter." O'Keefe is reportedly in line to become the chancellor of Louisiana State University in Baton Rouge; the position carries a salary more than three times the $158,000 he makes as NASA administrator.

O'Keefe became the space agency's 10th chief in December 2001 and has shepherded NASA through a particularly tumultuous three years. A self-described "bean counter" who formerly worked in the Office of Management and Budget, he was brought in to tame cost overruns in the International Space Station program. The Columbia disaster and the subsequent investigation, which blamed the accident on both technical and management problems, have preoccupied NASA since February 2003. O'Keefe recently instituted a sweeping reorganization to better prepare for President Bush's exploration initiative, which aims to return astronauts to the Moon and eventually send people to Mars. O'Keefe is credited with helping to secure a 5 percent increase in NASA's budget for fiscal year 2005, in stark contrast to most other non-defense-related government agencies, which saw their funding reduced.

Among astronomy enthusiasts, O'Keefe is notorious for his decision to stop servicing the Hubble Space Telescope. He made that controversial call in mid-January 2004, out of concerns for astronaut safety in the wake of Columbia's destruction. The ensuing outrage from many astronomers, ordinary citizens, and members of Congress caused O'Keefe to direct NASA to study a possible robotic servicing mission as a less risky alternative to a shuttle flight. But last week a National Academy of Sciences committee concluded that Hubble will likely succumb to electronics failure well before a robotic repair mission could be launched. The panel, chaired by veteran space scientist Louis J. Lanzerotti, recommended doing exactly what O'Keefe said he would not do: send another Space Shuttle to service the telescope and extend its scientific life.

The timing of O'Keefe's departure remains uncertain. "I will continue until you have named a successor," he wrote the president, "and in the hopes that the Senate will act on your nominee by February." The first post-Columbia shuttle launch is currently scheduled for May.

With O'Keefe stepping aside, astronomers are hopeful that NASA will follow the National Academy's recommendation and schedule a shuttle mission to Hubble as soon as possible. Whether this happens will depend critically on whom President Bush appoints as the agency's next administrator. Among those rumored to be under consideration is former astronaut Charles F. Bolden Jr., who piloted the Hubble-deployment mission aboard the shuttle Discovery in April 1990 and served on the Lanzerotti panel. Another name being floated is retired general Simon P. "Pete" Worden, himself an astronomer. The White House has not committed to a timetable for naming O'Keefe's replacement, but an announcement is likely within days.