NASA's New Eye on the Sun

I never tire of watching rocket launches, and thanks the Internet it's so easy to do. Last week I got up in the wee hours — twice — to watch the last-ever night launch of a Space Shuttle get postponed and then make its fiery ascent into the blackness. 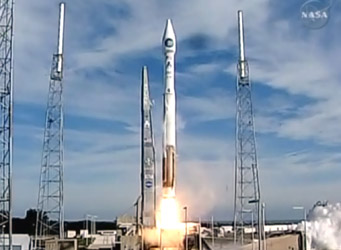 This morning I looked on, mouthing the final countdown to myself, as NASA's Solar Dynamics Observatory got its ride into orbit atop an Atlas V booster and Centaur upper stage. Launch came (again after a day's delay, due to high winds) at 10:23 a.m. Eastern Standard Time. About 16 minutes later, the Centaur engines shut down, and SDO was already in orbit. Great stuff!

Solar scientists have high hopes for this space sentinel, which will occupy an inclined but geosynchronous orbit that will keep it in constant view of a tracking station in New Mexico. It's the key element in an extensive program, dubbed "Living With a Star" by NASA's moniker-makers, to understand the Sun as never before. "SDO is going to make a huge step forward in our understanding of the Sun and its effects on life and society," predicts Richard Fisher, who directs the space agency's heliophysics division.

Equipped with three major instruments, the spacecraft will focus on measuring the Sun's extreme-ultraviolet luminosity, its global magnetic field, and temperatures in the chromosphere and inner corona. The hope is to record all this data frequently for an entire 11-year-long solar cycle. 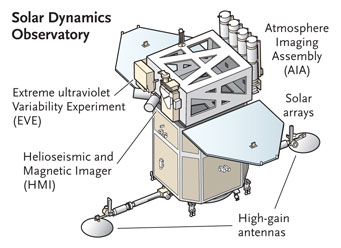 Three instruments aboard NASA's Solar Dynamics Observatory will keep the Sun under constant scrutiny throughout an 11-year-long solar cycle.

The Helioseismic and Magnetic Imager (HMI) will monitor the Sun's internal vibrations, which cause its surface to quiver like a struck bell at many different frequencies. The expected advances in helioseismology, as this science is known, should be revolutionary — physicists hope to determine the origin of solar variability and to characterize and understand the Sun’s interior and the various components of magnetic activity.

The Atmospheric Imaging Assembly, or AIA, will allow scientists to see the entire disc of the Sun and its inner corona in very high resolution. Each of its four telescopes will monitor two wavelength channels using 4,096-by-4,096-pixel CCDs. The hope is to learn what makes the corona so hot and how energetic outbursts propagate through it.

Meanwhile, the Extreme-ultraviolet Variability Experiment (EVE) will use a combination of detectors to record the Sun's ultraviolet spectrum every 10 seconds. This wavelength range is sensitive to changes in magnetic activity and should provide clues to understanding how variations in the Sun's luminosity are linked to its magnetic fields.

One aspect of all this intense scrutiny is that SDO will image the Sun every 0.75 second at extremely high resolution. There'll be a lot of data to analyze — 1.5 terabytes each day, equivalent to a CD's worth of data every 36 seconds. (That's why it needs to remain in continuous view from a single dedicated tracking station.)

You can learn more about SDO and its scientific promise at the mission's website. 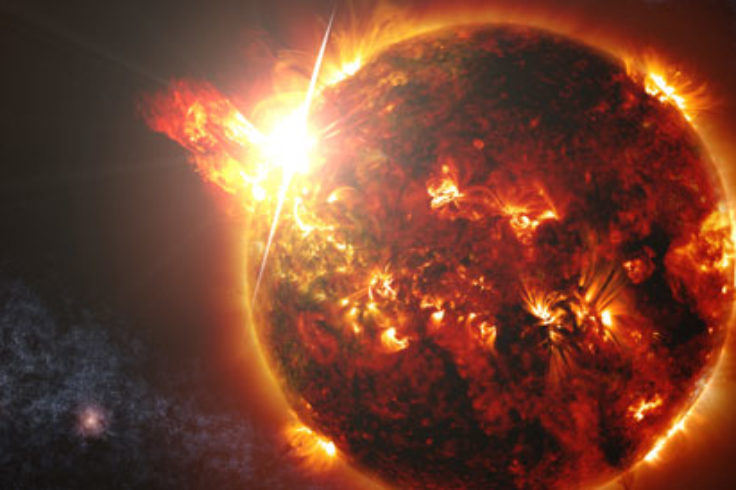 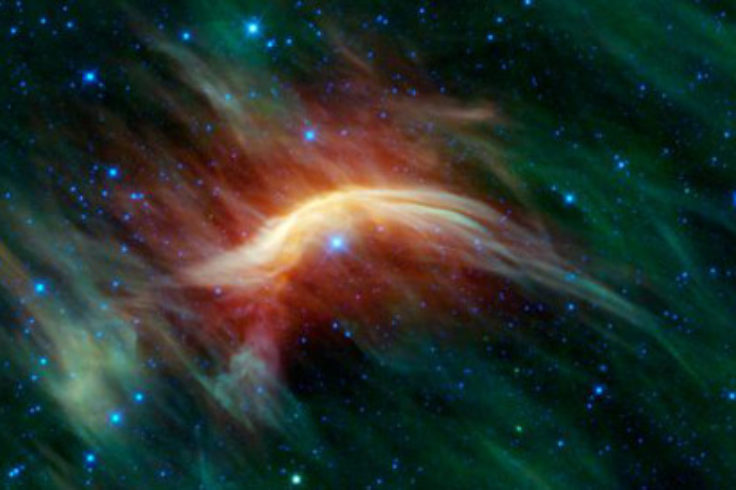