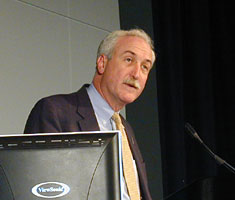 NASA administrator Sean O'Keefe addresses the summer 2004 meeting of the American Astronomical Society in Denver, Colorado, on June 1st. He pledged to explore a variety of robotic options for servicing the Hubble Space Telescope.

NASA administrator Sean O'Keefe says that plans are moving forward to service the Hubble Space Telescope with a robotic mission by the end of 2007. In an address yesterday at the meeting of the American Astronomical Society in Denver, Colorado, O'Keefe maintained that the space agency is committed to extending the orbiting observatory's lifetime, and to that end he has decided to solicit formal proposals to service Hubble without the use of the Space Shuttle.

Addressing the 1,400 astronomers gathered in Denver, O'Keefe also detailed what he called the "very painful" decision he made earlier this year not to proceed with another shuttle mission to replace Hubble's failed gyroscopes and weakening batteries. Without those repairs, the observatory will likely become inoperable as early as 2008, leaving astronomers without the services of a major orbiting observatory until the launch of the infrared James Webb Space Telescope, anticipated in 2011. During the Hubble house call, which had been scheduled for 2004 prior to the loss of Columbia early last year, astronauts also would have installed two state-of-the-art science instruments.

In O'Keefe's view, the robotic mission to Hubble will demonstrate autonomous capabilities that will pay dividends long into the future. Its primary objective, he explained, is to affix a rocket module so that the 12-ton observatory can be safely destroyed once its mission ends by forcing it into Earth's atmosphere over an unpopulated area. Beyond that, however, O'Keefe was noncommittal about what else the mission would be required to accomplish. Battery and gyro replacement, along with swapping in the new experiments, will be technically challenging and may make the effort prohibitively expensive.

O'Keefe voiced strong support for the Webb telescope, stating that from this point forward the only impediment to its launch would be technical issues, not lack of adequate funding. He also backed plans for other large-scale astronomy missions such as Laser Interferometer Space Antenna and Gamma-ray Large Aperture Space Telescope. "We have a lot on our plate," he noted.

Steven Beckwith, director of the Space Telescope Science Institute, was encouraged by O'Keefe's pro-astronomy stance but worries that the Hubble plans leave too many options open. "The only thing that's mandatory is the deorbit module, and that's not enough," Beckwith said. He believes that a full-service robotic mission — one that accomplishes the needed repairs and installs the new instruments — is technically challenging but doable before the telescope succumbs to an electronics failure.

Others aren't so sure. Just last week 26 former NASA astronauts sent a petition to President Bush asking him to reinstate a shuttle flight to Hubble. Walter Cunningham, who orbited the Earth aboard Apollo 7 in 1968, wrote the petition. "A robotic servicing mission is pie in the sky," he told Sky & Telescope. "We've never even done a robotic rendezvous and docking."

Proposals for servicing Hubble, which must be submitted by July 16th, will likely draw from more than two dozen ideas sent to the space agency during the past few months. O'Keefe says that a decision on whether to proceed further should be made by early September. He offered no estimates for the mission's likely cost, but he noted that most of the funds would come from the agency's newly created Office of Exploration Systems rather than the Office of Space Science. That may allay astronomers' concerns that the cost of a Hubble repair might force the delay or cancellation of other astronomy missions now in preparation.