An examination of the light reaching us from a supernova some 300 million light-years away has led astronomers to conclude that the detonation occurred when two stars merged. 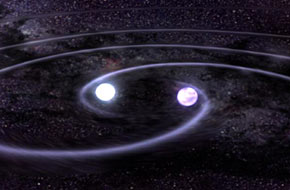 There are several mechanisms that can produce a supernova. One means that has been a powerful cosmological tool as a "standard candle" involves a white-dwarf star in a binary system with a "regular" star. If the orbiting dwarf accumulates enough material from its companion, it will reach a critical mass and collapse to produce a runaway thermonuclear explosion.

In the case of the enigmatic star burst in galaxy IC 1277 in Hercules, designated Supernova 2006gz, it was originally thought to be one of these so-called Type Ia supernovae. However, the spectrum of the fireball revealed some surprises. Its strongest signature was for carbon, one of the main constituents of a white dwarf's outer shell. The spectrum also showed silicon, which would form during the explosion. Furthermore, the supernova was brighter than expected for its distance. This implies that the star weighed much more than the tipping point for a Type Ia.

For these reasons, Malcolm Hicken (Harvard-Smithsonian Center for Astrophysics) and his colleagues suspect that the explosion was caused by the collision of two white dwarfs. The chemical findings match computer simulations of a dual-dwarf impact.

For more details, see the CfA press release, or read the full article in the November 1st issue of Astrophysical Journal Letters.