For once, the theorists got it right! Just as predicted, the Aurigid meteor shower made a strong showing on the morning of September 1st. The brief but intense peak occurred at roughly 4:15 a.m. Pacific Daylight Time (11:15 Universal Time), within 15 minutes or so of the predicted maximum. I'd say that's pretty good, considering that these particles were shed by Comet Kiess (C/1911 N1) more than 2,000 years ago!

As with the total lunar eclipse of August 28th, the timing of the shower's maximum favored western North America. At Griffith Observatory in Los Angeles, nearly 400 "Friends" and staff of the facility began watching about 4:10 a.m. "Over the next 35 minutes," director E. C. Krupp reports, "between 12 and 15 bright meteors were easily seen despite the light-drenched Los Angeles sky, bright waning gibbous moon, and scatttered light cloud."

On the East Coast, where morning had already dawned, meteor maven Joe Rao tuned in to the meteor radar at NASA's Marshall Space Flight Center. Rao says a "burst" of radio activity seemed to last between 11:30 and 11:34 UT (7:30 to 7:34 a.m. EDT). "During that interval I was able to hear many long overlapping whistles with quite a few 'pings' as well."

When the Aurigids rained down, I had the good fortune to be in my hometown of Madera, California, and I can attest that the shower lived up to its advance billing. The waning gibbous Moon washed out the faintest arrivals, but over the course of 30 minutes I witnessed a half dozen stunners, all magnitude +1 or brighter. Bill Smith, observing well north of me in Ukiah, California, concurs: "The shower members were quite consistent in brightness, being about magnitude 0. A few were as bright as –2." 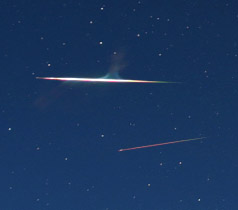 I wish I could show you my snapshots of those bright fireballs, but — you guessed it — every one of them managed to flare across the sky just outside of my camera's field of view. As seen at right, Sky & Telescope contributing editor Alan Dyer had much better luck from his home in Calgary, Alberta.

Somewhere in the darkness above me, two Gulfstream V jets were silently whizzing by at 47,000 feet, carrying Peter Jenniskens (SETI Institute) and his handpicked team of researchers. From all accounts, they got some amazing results.

But plenty of observers on the ground got to see the spectacle too. If you're one of them, please consider adding your views to our online gallery of images. And if you've got an observation to report, please add a comment below.

Observed from my home in Los Angeles near Santa Monica. There is moderate light-pollution but with the bright moon this was not a problem. Started observing at 3:35 am with altocumulus clouds covering about 50% of the sky. Saw an Aurigid at 3:40 am. Saw nothing else until 4:05 am when I saw three Aurigids in one minute. Two of these I saw in clear parts of the sky. The third was so bright that it shown through the translucent clouds. Right after this more clouds formed covering about 90% of the sky. As a result I saw nothing from 4:05 am to 4:20 am. Then just as suddenly the clouds dissipated, and the skies were clear. Saw five Aurigids from 4:20 am to 4:35 am. Skies continued clear but saw no more meteors from 4:35 am to 5:10 am (ten minutes into astronomical twilight). Estimated the radiant to be near the intersection of the diagonals in the "kite" in Auriga (+ 42, 5 hr 40 min).

Corvallis, Oregon. Wow! Observing under a cloudless, moderately transparent and moderately light-polluted sky (city and moon) from Martin Luther King Jr. Park at the NW outskirts of town, I observed well over a dozen Aurigids from about 0400 to 0450 PDT. A few were very bright (0 to -1 magnitude). I estimated the peak to be close to 0417 PDT give or take a few minutes, and was quite happy to later learn that this estimate seemed to agree with some of the other observations. The meteors had a definite white-yellow color when compared to the blue tint of the Perseids that I had observed just a couple of weeks earlier. Several meteors appeared within seconds or about ten or so seconds from each other near what I perceived as the peak time. There were also many “Teasers” that zipped by at the limit of my vision, leaving me not sure if I had seen something under moonlight and city light pollution or just a result of signal noise from my brain/vision system. The meteors seemed to decrease rapidly after 0425 and I left the site around 0447. However, on the drive home, looking Northeast through my windshield (poor observing conditions) I sighted a very bright yellowish meteor head straight down toward the horizon.

I watched the Aurigids from a cloudless rural dark sky location north of Los Angeles. Apparently my experience was very similar to those at the Griffith Observatory in the heart of the Los Angeles area though. I saw a dozen Aurigids in the 45 minutes beginning at 4:07am: 9 in the first 15 minutes, 3 in the next 15, 1 in the next 15 minutes and none in the 15 after that. I think that the brightness of the moon 4 days past full plus the Moon's height in the sky and the brightness of the shower meteors served to equalize the two different viewing sites. All of the Aurigids I saw were in the 0 to -2 magnitude range. I wasn't struck by the color of any except for one which seemed distinctly blueish.

I observed from San Jose, CA, starting at 4:10AM PDST and ending at 5:08 AM. First meteor was seen at 4:17. The bright moon made record keeping easy as I could both write and read my LC watch by its light! A total of eight VERY bright (better than -1 mag) were seen looking in the direction of Auriga (not the best place to look, but the only open sky I had). I would rate this show spectacular with long trails, bright blue flash and out standing general brightness.

From just outside Walla Walla, WA I began observing at 4:05 AM. I was facing ENE with a very clear sky. I was shaded from the bright moon by a nearby tree. Saw the first meteor at 4:14. Nothing more until 4:18 when began a breathtaking 11 meteors between then and 4:23. I had observed another six meteors from then to 4:35, then no more until I stopped observing at 4:50. All were bright--mostly mag -1 to -2 average, with one approximately mag -5. All had long trails, one persisted for several seconds. I also observed 2 bright meteors that were not a part of the shower. GREAT SHOW!!

I couldn't watch out for the Aurigids due to my brother's decision to get married that day. I had hoped to watch out for some early ones on the night of 31st Aug/1st Sept, I was never going to see the whole show as I was in Scotland. However, I couldn't turn up at a family wedding with no sleep, so I reluctantly gave up the idea.

At the wedding reception that evening, I went outdoors with a few of my brother's friends. One asked me about shooting stars and I said we had just missed a really good show when a very bright (mag 0 I would guess) meteor flashed across the sky. Everyone was really impressed. I think half the guests ended up outside gazing up at the sky hoping for another. A relative had just said "nothing's going to happen!" when a second meteor, brighter at maybe mag -1, shot across the sky leaving a bright trail that lasted for a few seconds. I don't know if they were Aurigids as I couldn't see many stars due to light pollution, but they did have perfect timing! It reminds me why I really love astronomy.