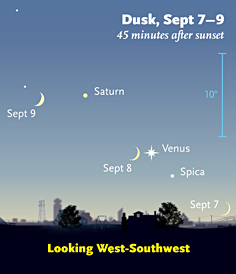 The Moon and Venus pair dramatically after sunset on September 8th.

Even folks with no interest in astronomy are impressed when there's a tight pairing of two bright celestial objects. So keep an eye to the early-evening sky on Sunday, September 8th, and tell all your friends and relatives to do likewise.

Soon after sunset, you'll be rewarded with the dramatic pairing of a pretty crescent Moon paired closely with the dazzling planet Venus. This is one you won't want to miss — these are the two brightest objects in the nighttime sky.

Start looking about 30 minutes after sunset. The farther south and east you are in North America, the closer the two objects appear. For example, along the East Coast they'll be only about 1½° apart — about the width of your index finger at arm's length. By the time darkness falls on the West Coast, the separation will be about 2½° — not quite as close but still quite eyecatching. 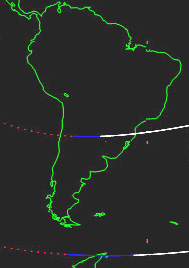 Anyone situated in South America between the two lines on September 8, 2013, will see Venus dramatically disappear along the crescent Moon's dark limb and reappear on its bright limb. See this website for more details.

Viewed from Europe, the Moon will appear below the planet but still close by. In portions of Brazil, Argentina, and Uruguay, the lunar disk actually covers (occults) Venus for a short time; you can get predictions for specific locations from the International Occultation Timing Association.

The pairing will look especially dramatic when viewed through binoculars or a small backyard telescope. Although the celestial duo might seem close together, it's really just a matter of their chance alignment. Venus is actually more than 400 times farther away — just under 100,000,000 miles, compared to about 235,000 miles for the Moon.

Venus shines with a steady, unmistakable gleam. Often called the "Evening Star," it has been lingering above the western horizon after sunset for the past few months, and it will remain in view there through the end of the year. Seen through a telescope, the planet shows a tiny gibbous (football-shaped) disk.

Meanwhile, the Moon is only three days past new, so its crescent will look razor-thin. As the sky darkens, the dark, left-hand portion of the lunar disk might be filled in with a ghostly glow known as earthshine. That portion is being dimly lit by the light of the nearly-full Earth, looming large in the Moon's night sky. 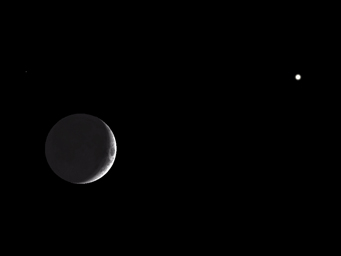 This simulation shows how September 8th's razor-thin crescent Moon, its nightside bathed in earthshine, will appear roughly 2° from brilliant Venus. The pairing will look very dramatic through binoculars or a small telescope.

Two other celestial treats are lingering nearby. Look to the upper-left of the Moon and Venus, by about the width of your clenched fist at arm's length, to spot the ringed planet Saturn. To the duo's lower-right, not so far away, is the star Spica. Even greater distances are involved here: Saturn is 970 million miles away, and Spica is 1,500 trillion miles (260 light years). Both Saturn and Spica are much fainter than Venus, so they won't become visible until twilight deepens.

The prior evening, September 7th, you might glimpse an even thinner lunar crescent hugging the western horizon to the lower right of Venus. One day afterward, on September 9th, the Moon's somewhat-fatter crescent will be higher up and farther to the left.

If your skies are crystal clear, you can easily find Venus in daylight today near the Moon. Binoculars help! In fact, it may be harder to find the Moon than Venus. The Moon right now is about 42 degrees from the Sun. But once you find it, if skies are clear, and you have reasonably good eyes, Venus pops right out just above the Moon (North American observers). I pointed it out to my neightbors a few minutes ago (in full daylight) and they had no trouble seeing it once they knew it was there.