The world's largest set of opera glasses is operational. 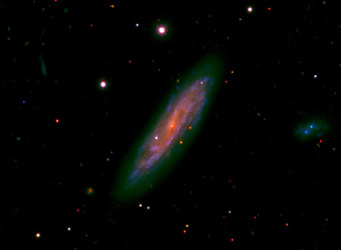 This image, one of the first ever taken using both mirrors of the Large Binocular Telescope, shows ultraviolet, green, and red light in the spiral galaxy NGC 2770.

The Large Binocular Telescope (LBT) in Arizona achieved an important milestone in January when both of the telescope's 8.4-meter mirrors pointed toward the spiral galaxy NGC 2770. Last week the LBT folks released the images.

This critical step means we're not far from having another full-time telescopic giant producing incredible observations and scientific discoveries. And it poses the question: Is LBT the largest telescope in the world?

If you ask me, I say no. When the images are combined, the two LBT eyes have the light-collecting area of a single 11.8-meter mirror. And they ride on the same mount and always point in the same direction. But it still takes two separate primary mirrors and two separate optical systems to make the magic happen. The largest binoculars? Sure. The largest telescope? The purist in me still gives the title to the 10-meter Kecks. The 10.4-meter GranTeCan in the Canary Islands isn't quite up and running yet, but it should be soon. When that happens, in my book it will take the crown.

And I don't count Hobby-Eberly Telescope or the Southern African Large Telescope because they can't point all over the sky, and not all of the primary mirror is working at a given time.

So let's start the debate. Do you think the LBT should rank as the "world's largest largest optical telescope"? If you read their press release, that's what they're calling it.

What do you think?

I think this is something you need to categorize rather than generalize. There are radio telescopes larger than Keck, and what about arrays?

While I think the classification you have in mind is largest single mirror, you may still have to employ a sub-category for those mirrors made of several sections.

At the end of the day, or decade, it doesn't really matter because there's, usually, something larger being planned.

It depends on the definition of what is constitutes the largest telescope. Is it the total light collection, irrespective of how it is collected?

I interpret the LBT's folks classification their telescope as having the largest light collection area under one roof. Light from both 8.4m primaries are always combined, giving a total area of a single 11.8m mirror. But this says nothing about how the light is collected. Each of the Kecks have the largest light area collected to a common focal point.

If the light collection criteria is expanded to include multiple structures, then I think ESO's VLT would take the prize.

Before I can objectively comment I--indeed all your readers--need to know the rationale and physics, including formulae, whereby you arrive at the conclusion that two 8.4m light-collectors are the equivalent of one 11.8m device.
Warmest regards...

This kind of writing approach is one of the reasons I cancelled my subscription. Standards for writing throughout journalism have gone down sharply in the last few years. Very disappointed to see it at Sky and Telescope. You're trying to fabricate a debate about telescope size? Telescopes are built to particular strengths for specific kinds of investigation. How about doing a little research yourself, and then you can inform the rest of us? Isn't that what writers for magazines do? Umm.. used to do?

Laramie, while agree that S&T’s scientific journalism standards are not anywhere near the levels in the heydays of the late 80’s and early to mid 90’s, what general reader scientific related magazine is? Have you read Astronomy, or even Discover or Scientific American Lately?
Astronomy has always been geared more towards the ‘casual’ reader but the bulk of the last year’s worth of issues has had ‘little steak and a whole bunch of salad’ as my grandfather used to say. Most of the articles seem to point out that there is something unknown (dark matter, dark energy, higgs bosons, etc.) that once proven will upset the apple cart of science but there is little in the way of why. ‘It just will’ is apparently a given.
SA seems to be little more that the bully pulpit for the scientific political set, usually more op/ed than science. Discover has also delved into the same realm, perhaps not to the same extent but the substance level has always been a tad lower.
As we race further into the information age the fact that people like me with access to spell check can be published as a ‘journalist’ means without high editorial standards in place the slope only becomes ever more slippery.
On the other hand David Tytell is asking a fair question, should a binocular telescope be able to claim, “With its capability, the LBT is the largest single telescope in the world,” in their press release? Personally, I think that currently belongs to one of the Kecks but that’s just me.

Well--if you are going to allow segmented mirrors you really will have to contort your argument if it starts to matter how they are mounted in relation, each segment to the others. I would say it qualifies as a very large segmented mirror telescope.
Stan

Does it really matter who has bragging rights for the largest telescope?

What is more important is which telescope is being used to generate the most important scientific knowledge. Yes, size matters -- but so does optical quality, site quality, adaptive optics, imaging sensitivity, staff skill and ingenuity, and a host of other factors. The fact that the LBT can be used as an interferometer is a big advantage. (But isn't this also true of Keck I & II?)

Of course, if "aperture fever" can be used to induce a rich benefactor to build the world's largest telescope to carry his name, who am I to quibble?

Hmmm… the SDSS uses a 2.5m mirror and is churning out reams of useful scientific data. HST has a 2.4m mirror and has been returning superb science for fifteen years (I won't count the time from launch until "glasses" were installed to correct it's vision). Big is nice. Useful is better. Let us judge the LBT not by it's size or possibilities but by the quality of it's scientific output. Give the folks a chance to prove that their unique scope was worth the time, effort and money to construct it. Then, maybe, an argument for or against mere size will present itself.

This is hilarious. Only at Sky and Telescope (and the New York Times where former S&T operative Dennis Overbye works) would someone seriously argue that a 10 metere telescope (Keck/GranTeCan) with 36 segments is bigger than a 23 meter telescope with two segments because the 23 meter telescope... has two segements.

And why wouldn't Tytell mention that while the collecting area of the telescope is 11.8 meters its resolving power is that of a 23 meter telescope, with the capability of delivering images 10 times sharper than Hubble.

This is the first ETL on a huge mount and its laying the groundwork for the ones to come in the next two decades.

Why S&T doesn't celebrate this is a mystery. Maybe they have friends at the Space Telescope Institute whose jobs might be threatened by the advent of such an instrument?

Or maybe they're people who can't accept that the Italians (who've played a big role in this project) and Arizonans are capable of building such an incredibly powerful instrument that is already delivering science publications with the words deepest ever.

Let's remember the KISS principle. It should be a measurement of the total light gathering power of a single instrument. The Binocular Telescope is a single instrument. Built that way from the start. The real focus should be that we have another extraordinary telescope to begin new discoveries of the universe. We are living in a golden age of exploration and discover. By the way, there is never enough light gathering power -- size does matter.

I am privileged to have just complted two weeks touring Arizona and New Mexico on an astronomy vacation which included visits to 5 major observatories. I find it odd that neither the article or any links give the location of the LBT except to say "Mt. Graham."
The omission is, of course a manifestation of the aforementioned "dumbing down" of magazine journalism.
For the record, the town nearby is SAFFORD, AZ.

I am privileged to have just complted two weeks touring Arizona and New Mexico on an astronomy vacation which included visits to 5 major observatories. I find it odd that neither the article or any links give the location of the LBT except to say "Mt. Graham."
The omission is, of course a manifestation of the aforementioned "dumbing down" of magazine journalism.
For the record, the town nearby is SAFFORD, AZ.