A late-summer thunderstorm rumbled past this evening and, in its wake, a slice of clear sky to the southwest revealed a beautiful crescent Moon in the deepening twilight. 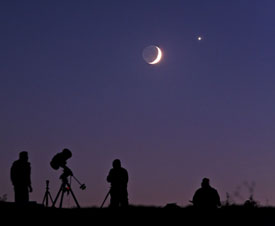 A crescent Moon joins Venus on the evening of September 11, 2010, as seen by skywatchers in Firuzkuh, Iran.

Something about that visage compelled me to go looking for poetic quotes about the Moon. I scanned scores before deciding on this simple one to share with you. It's by Jean Ingelow, from Part II of her Songs of the Night Watches: The First Watch:

Most beautiful crescent moon,
Ship of the sky!
Across the unfurrowed reaches
sailing high.

Often reviled as a spoiler of starlight, the Moon nonetheless delights us with an ever-changing display while making its inexorable monthly circuit around Earth. You can train a telescope at a particular crater or other feature and, by the time your evening's observing is over, the inky shadows around it will have shifted slightly but perceptibly.

Be honest: when was the last time you slewed your scope over to the Moon for some careful scrutiny? Or have you ever dusted off the binoculars stashed in the hall closet to see just how many lunar details you can pick out at 7× or 10×? 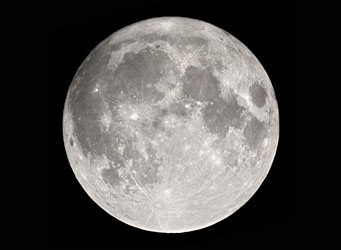 When the Moon is full, its craters, mountains, and other surface features appear muted because the high Sun casts no shadows as seen from our earthbound perspective.

Well, if you've been looking for an excuse to do some Moonwatching, here it is: September 18th is "International Observe the Moon Night." It's the brainchild of several "Moon Units" within and related to NASA: the Lunar Reconnaissance Orbiter mission, Lunar Science Institute, Lunar and Planetary Institute, and Lunar Quest.

Partnering with Astronomers Without Borders, these teams hope the success of recent missions — led by last year's crater-whacking LCROSS and the ongoing LRO, along with the international missions Kaguya, Chandrayaan 1, and Chang'e 1, will rekindle public interest in observing and studying the Moon.

The plan is simple: go out and look on the 18th, when a plump, gibbous orb will be gliding across the southern half of the sky. Many organized activities are in the works; check out the event map to find one near you.

Or make your own event. Head for a pedestrian hotspot in your town with a telescope in tow, and crowds will surely gather for a look through the eyepiece. (Trust me: no matter how bad your light pollution, the Moon is still an arresting sight when seen telescopically.)

Even if your scope-less, the organizers have pulled together lots of entertaining online content for various sources, such as a lunar-exploration timeline, a guided tour, and a call for Moon-inspired poetry. The event's portal at NASA's Goddard Space Flight Center is here.

If you've got the time and inclination to view the Moon multiple times in the coming weeks, I highly recommend Patrick Thibault's can't-miss Month of Moonwatching.

The plan, according to Brooke Hsu at NASA-GSFC, is to make this newfound appreciation of all things lunar an annual celebration. This year's theme is "Seeing the Moon in a whole new light!" Other themes are in the works through at least 2014.

I am one of the moon lovers. I am interested in watching it. I mentioned once during a full moon, a month ago, that I had seen beside a dark whole another one which gave a quick light, you never answered me?

I am very happy with your views and comments, thanks what about this story about the meteor which fell in Orgueil Village in France? Long time ago 1864 and now they are discovering new traces of a Supernova?

Thanks anyway even if you don't answer. Juliette

I hold my own 'event' on Halloween. I place an old C-8 out on the driveway and let the kids and parents take a look. The moon isn't always available, but Jupiter or Saturn are nice, too. I'll get a few that come by more than once. Several even forget to get candy!

Just last night, I rolled PlanetCatcher (our 12.5" f/10 Newtonian) up to the corner and was showing the first quarter moon to several neighbors and passersby. Nothing beats the view of the moon along its terminator - except, perhaps, for the good passage of the ISS at 8:04 pm CDT. My children and half a dozen others stared in awe at the brilliant "star" silently sliding across the twilight sky!!

I've been following the cycle of the moon for years, initially with only my naked eyes, now with binoculars and telescope. As much as possible I try to syncronize my life with the phases of the moon. New moon is a time of quiet and solitary reflection. During the waxing phase I start new projects and reach out to friends and family. Full moon is a time for celebration. During the waning phase I complete projects and tie up loose ends. During the last few days of the waning crescent moon I do some deeper than usual housecleaning, getting ready physically and spiritually for another new moon. This feels like a good and healthy way to live, although it's challenging with so much unvarying artificial light and the mainstream calendar which ignores the phases of the moon. I have a dream that we will start turning off all the outside lights twice a month, on the night of the full moon, so we can experience the magic of moonlight, and on the new moon, so we will remember what dark looks like. The SF Amateur Astronomers will be out tomorrow night celebrating the moon.

Well, it is good to hear about moon lovers, I wish that more people will be interested in the nature, the sky at night, the environment, the world will be cleaner!

Whenever possible, I am out and using my telescope, if not my eyes to enjoy the night sky. Jupiter is now my favorite, of course after the moon. Juliette