Anyone who watches Jupiter through a telescope or binoculars is familiar with the "line dance" performed by its four big, Galilean moons. Because they circle the planet relatively quickly, Io, Europa, Ganymede, and Callisto put on a fascinating, ever-changing interplay. Some nights you'll see all four of them lined up to one side of the planet, and the next night they'll be lined up on both sides. At any given moment, one might be crossing Jupiter's face, tucked behind it, or out of view in eclipse by the planet's shadow.

The night of May 21-22 offers a rare treat for skywatchers in Europe, Africa, and on the east coast of the Americas. For about 18 minutes, Jupiter will look as if all four moons have disappeared! In reality, a good sharp look should show Europa and especially its shadow crossing the planet's disk. Ganymede is hidden behind the disk, and both Io and Callisto are eclipsed in Jupiter's shadow to the planet's west. 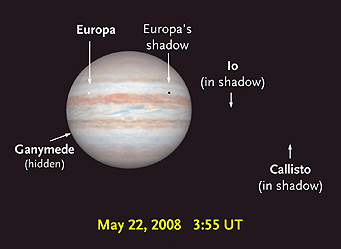 The moonless event begins at 3:50 Universal Time on the 22nd, with three moons already out of view as Io slips into eclipse. At 4:08 UT, Ganymede emerges into view along Jupiter's southwestern limb.

On the East Coast, the show begins at 11:50 p.m. EDT on Wednesday, May 21st, but you have to be very near the Atlantic Ocean for Jupiter to have cleared the eastern horizon by showtime. Skywatchers in Boston and Miami have a chance to see it, but those of you farther west, in Pittsburgh and Atlanta, for example, miss out.

But take heart! These "Jupiter without satellite" events happen about 20 times per century, according to astronomical calculator Jean Meeus, and another one occurs next year: on September 3, 2009. At that time Jupiter will be high up in the sky for the Americas — and the moons' disappearance will last nearly 2 hours!

To find out when specific Galilean satellites are playing hide-and-seek at other times, consult our downloadable listing for 2008 (a 148-kilobyte PDF file). Or check out our entertaining Jupiter's moons viewer, which allows you to customize the time, date, and viewing aspect (free, but registration required).

Very informative and interestin article. Unfortunately, I live in Denver, Colorado and won't be able to see it. By the way, I was wondering if Kelly Beatty is from Oklahoma City. I had a friend named Larry Beatty who had twin brothers, is Kelly perhaps one of them?


Pete: sorry, not me. I was born and raised in central California. — Kelly Beatty

Looking at Jupiter before sunrise 2008-05-19 at 4:45am EDT and Io appeared almost touching Jupiter's disk at clockface 11:00 not well separated to the East. The StarCalc program displayed as the S&T Java did.

My observation disagreed with both. Observed in clear sky with 15x70 binoculars. Europa, Ganymede and Callisto observed positions did agree with my observation. Only Io was in the wrong location.
- Ben

Ben, we don't know of any problem with our applet. Keep in mind that in your 15x binoculars the glare of Jupiter's disk makes the planet appear bigger than it really is. So a moon fairly near the planet can seem to be "almost touching" Jupiter when it's not. — Roger Sinnott

That would be cool to see but I got to hit the sheets at 10:00. Besides I have a cold to get over!

That would be cool to see but I got to hit the sheets at 10:00. Besides I have a cold to get over!