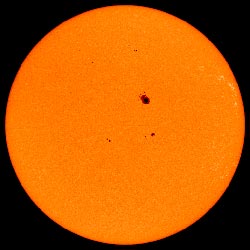 Sunspot group 10306 will remain visible on the solar surface until the third week in March 2003. All you need to view it is a safe solar filter. A telescope helps, but the spot is so large you can see it without one.

After weeks of having a face free of large blemishes, the Sun now sports a second consecutive giant spot. Designated active region 10306, the sunspot is large enough to be visible without magnification — all you need to see it is a sunny day and a safe solar filter. Of course, a properly filtered telescope makes the view even better. (The first spot, region 10296, appeared in early March 2003 and has since rotated off the western limb of the Sun.)

The Sun turns on its axis roughly once a month, so this large spot will remain on the Earth-facing side of the solar disk until later this week. Remember, never look at the Sun without proper eye protection. There are a variety of ways to safely observe the Sun, many of which can be found in the solar observing section of our Web site. If it's cloudy, you can check out the solar disk on the SOHO Web site (click on "Latest Images" followed by the "Near real time images" hotlink).