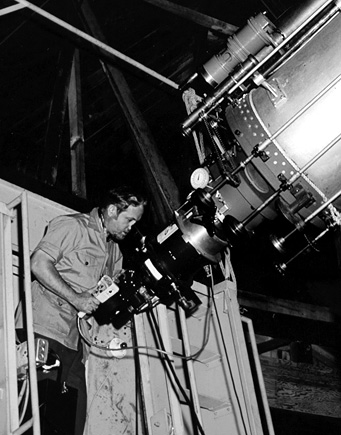 A 43.5 mile (70 kilometer) crater on Mars has been officially named in honor of astronomer Charles F. “Chick” Capen.

Capen (1926–1986) was a powerhouse in the study of Mars, becoming an apprentice to professor Clyde W. Tombaugh while attending New Mexico State University, and worked closely with him in the 1950’s performing a photographic search for small, natural, Earth orbiting satellites. As resident astronomer for JPL’s Table Mountain Observatory in Southern California, his research contributed to both the Mariner and Viking spacecraft missions to Mars.

Though a professional astronomer, Capen was a strong proponent for pro-am collaboration, particularly focusing on solar system studies. While working at the Planetary Research Center in Flagstaff, Arizona, Chick became the director of the Association of Lunar and Planetary Observers (ALPO) Mars section. He was also a pioneer in color film astrophotography and frequent contributor to many professional and amateur publications, including Sky & Telescope.

Your article is informative, clear and insiring in some way. I am new to viewing Sky and Telescope on the internet although I used to subscribe to it a long tiome ago. I am passionately interested in everthihng viewable on Mars amd this artocle seems to be the right introduction for me. Thank you.