Moon and Planets Parade at Dusk

As if to celebrate the change of the seasons, four of our solar system's bright planets are putting on a parade at dusk during the last week of June 2006. One of them — giant Jupiter — gleams brilliantly low in the south as it gets dark. You can't miss it; it's the brightest point of light in the sky these evenings. You might easily overlook the other three worlds — Mercury, Mars, and Saturn — which are much fainter and setting in the west-northwest during twilight. Thankfully the waxing crescent Moon comes to the rescue, pointing the way to the planetary trio. And your eyes are all you need to enjoy the spectacle — no telescope required!

The best nights to watch the planet parade are Tuesday and Wednesday, June 27th and 28th. After dinner, go outside and find a spot with a clear horizon to the west-northwest, where the Sun sets at this time of year. By about 45 minutes after sundown, you should be able to spot the very thin crescent Moon to the upper left of where the Sun set. Don't look too high up; the Moon will stand low over the horizon, by no more than the width of your outstretched hand seen at arm's length.

Mars, Saturn, and Mercury form a diagonal line in the sky. During twilight on the 27th, skywatchers in North America can find Saturn by looking a few finger-widths to the upper left of the Moon, and fainter Mercury about the same distance below the Moon. Mars, which looks distinctly ruddy compared to its yellow-white neighbors, is upper left of Saturn. The darker the sky, the easier it'll be to see the planets, though they're getting lower by the minute, so if you wait too long, they'll set! Binoculars will make easier work of finding the trio, and they'll show you craters and plains on the Moon too!

On the next evening, June 28th, the diagonal line of planets starts just below the lunar crescent, which is now slightly thicker than it was the night before. If you aim your binoculars at the Moon and then lower them slightly, you'll come right to Mars. Saturn and Mercury continue the line to the lower right.

Although it looks like the Moon, Mars, Saturn, and Mercury are all bunched together in space, they're not. It's just a cosmic coincidence that they're all in the same part of the sky as seen from Earth in late June. The Moon, orbiting the Earth, is about 240,000 miles away. Mercury, orbiting the Sun, is nearly 270 times more distant, about 65 million miles away. Mars, the next planet out from Earth, is several times farther still, some 215 million miles away. And remote Saturn is nearly a billion miles out!

So why does Saturn appear brighter than both Mars and Mercury? Because it's much bigger. Mercury and Mars are barely half the size of Earth, whereas Saturn is almost 10 Earths in diameter.

While you have to race against time to catch Mars, Saturn, and Mercury before they set, you can take a more leisurely approach to Jupiter these evenings, since it remains visible well into the dark of night. (Jupiter, about 11 times wider than Earth and the biggest planet in our solar system, is currently more than 400 million miles away.)

Binoculars will show as many as four faint dots in a line straddling Jupiter; these are the Galilean moons Io, Europa, Ganymede, and Callisto. You can watch them change position from night to night as they circle the planet. If you have a telescope, you'll get a much clearer view of this miniature "solar system," and you'll see dark belts and bright zones in Jupiter's atmosphere as well. For help identifying which moon is which, see the handy JavaScript utility at http://SkyandTelescope.com/jupmoons. 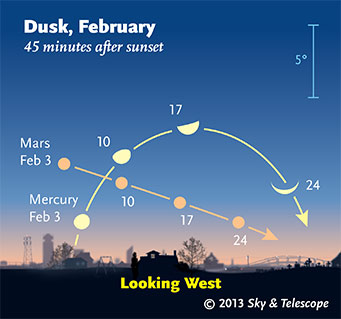 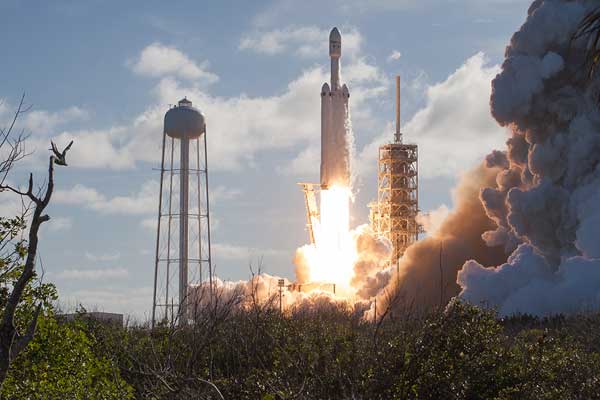