It's not often that solar astronomy is featured in the evening news, but then again the Sun doesn't often give rise to ferocious eruptions like the ones that spewed from active region 11429 (abbreviated AR1429) this past week. This bad boy let loose with two X-class flares on March 6th and numerous lesser blasts, which caused anxious concern among satellite operators and utility companies. In fact, as I write this, the last of its blast waves is crashing into Earth's magnetosphere.

AR1429 has just rotated off the Sun's disk — but it didn't escape before being captured in all its angry glory by Alan Friedman on March 11th from his home in Buffalo, New York. Friedman makes greeting cards by day, but in his spare time he's an accomplished astrophotographer who specializes in solar-system targets.

"The Sun dips down into the power lines behind my backyard in late fall and had just risen above them last weekend," Friedman explains. "I was so happy to have a cloudless Sunday and a clear view of the Sun again that I shot 40 gigabytes of data in awful seeing." His line of sight passed through turbulent plumes of heat rising from nearby rooftops, but during his 3-hour observing run he managed to get a few moments of still air.

To capture this amazing highly magnified view, Friedman used "Little Big Man," his usual solar-imaging rig. The business end consists of an Astro-Physics 92-mm f/4.8 apochromatic refractor and a Coronado SolarMax hydrogen-alpha filter with T-Max tuner. Then he adds a blocking filter, Barlow lens, and extension tube, all leading to a Point Grey Research Scorpion camera. It all rides on an Astro-Physics 900 equatorial mount. 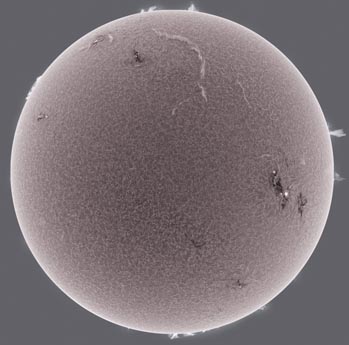 The big picture, as recorded in hydrogen-alpha light on March 11, 2012, reveals active region 11429 (right of center), prominences, and a tremendous filament arching above the Sun's chromosphere (above center). Click here for a larger view.

The Sun's appearance at the deep-red H-alpha wavelength of 656 nm reveals details in the tortured chromosphere that are hidden in broadband visible-light views. Here Friedman has rendered the image in inverted false color, so the dark regions are actually the brightest and hottest. The twisted maelstrom of AR1429, roughly four times the size of Earth, stands out against the carpet of tubelike spicules that cover the chromosphere. His remarkable solar portrait was featured yesterday on NASA's Astronomy Picture of the Day.

According to veteran observer Tom Fleming, at its peak AR1429 had blossomed into a complex of several dozen individual sunspots. Unfortunately, initial predictions of widespread auroral displays didn't pan out. (Maybe next time!)

We're still a year away from the peak activity in this current solar cycle, so I'm guessing that Friedman and Little Big Man will stay busy in the months ahead.