There's lots of great stuff in the evening sky now, but the real action is in the early morning. 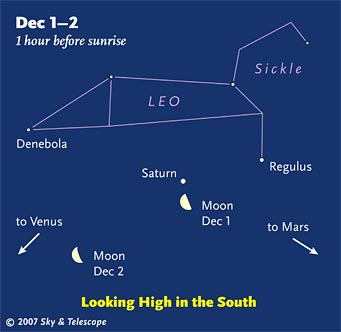 Saturn is at its highest in the sky shortly before dawn in December. And at the beginning of the month, the ringed planet is visited by the waning crescent Moon.

As the sky begins to grow bright, the dazzling winter stars are still hovering above the western horizon, with Mars riding high among them. Venus, many times brighter still, dominates the eastern sky. Meanwhile, Saturn, often considered the most beautiful telescopic sight in the heavens, rides at its highest in the south.

Saturn is twice as bright as nearby Regulus, the brightest star in Leo, but it's significantly fainter than it's been for most of the last decade. That's because its rings are now showing nearly edge-on to Earth. At their maximum tilt (in 2003), the rings outshone the planet itself by a fair margin. 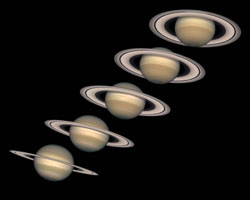 The Hubble Space Telescope captured the opening of Saturn's rings from 1996 (bottom) to 2000. Click on the image for a larger version.

For a brief time in 2009, Saturn's rings will be precisely edge-on to Earth, making them invisible in backyard telescopes. But right now, the rings' thinness makes them all the more attractive through a telescope. See if you can spot Cassini's Division, the thin black circle dividing the inner B ring from the slightly fainter A ring on the outside. You should be able to do it at 150× on a steady night, though Cassini's Division is a lot harder to spot now than when the rings are more face-on. And see our Observing Guide to Saturn to find out what else to look for in the rings and on the planet's disk.

Saturn's moons are actually easier to see now that the rings are less obtrusive. Titan, the brightest by far at eighth magnitude, is usually easy to recognize. But you'll need our Moon Utility to identify the other moons with confidence.

I enjoy reading Tony's blogs very much but can you ask him to refrain from using 'then' (second last para, second last sentence) when it should be 'than'. I may be old fashioned but, even now, these words still have a totally different meaning. The same thing happened last month.

Apolgies if it's the proofwriter. Smack on the wrist and back to school.

Tony replies: No, the mistake was entirely mine. Fixed now.