Update, June 28: It's now down to magnitude 13.0, and moonlight returns to the evening sky in about a week. Don't delay.

Update, June 24: Supernova 2011dh seems to be past its peak brightness and is now at about magnitude 12.7. S&T's Dennis di Cicco writes, "With the Moon out of the sky and M51 seen best as soon as it gets dark, now is the time for people to have a look. With high magnification and a moderately good sky, anyone with an 8-inch or larger scope should be able to spot the supernova. I can’t remember the last time we had one that was this easily visible."

Here's an up-to-date light curve from the American Association of Variable Star Observers.

For the second time in six years, a star has exploded in the iconic Whirlpool Galaxy (Messier 51), and — good news! — it's in play for backyard observers with medium- to large-aperture telescopes.

French observer StÃ©phane Lamotte Bailey created this animation of the Whirlpool galaxy's new supernova using images he took with his 8-inch telescope on May 30 and June 2, 2011.

The first hint of the eruption came on May 31st, when French amateur Amédée Riou noticed a previously absent 14th-magnitude star in a CCD image of the galaxy with a brand-new 14-inch reflector. "The picture was poor quality," Riou admits, "but I immediately noticed that something was different." A check of images he'd taken on May 10th revealed a new object in one of galaxy's arms. "I suspected it to be a supernova because of its blue color."

Riou recorded it again the following evening. Independently, it was identified on June 1st by Thomas Griga in Schwerte, Germany, and (visually) by Tom Reiland in Glenshaw, Pennsylvania. The next night it got picked up by French observer Stéphane Lamotte Bailey, who noticed it on digital images taken through his 8-inch telescope.

"I feel a high level of satisfaction with my visual discovery in this age of high-tech search programs and new imaging equipment," Reiland comments.

By then it had also been spotted by the robotic Palomar Transient Factory and the Galaxy Zoo's supernova hunters.

It's still too early to tell if the supernova is brightening or fading. There's nothing brighter than magnitude 19.5 in images acquired the night of May 30th with a 10-inch reflector at the University of Ljubljana in Slovenia.

Based on spectra in hand, astronomers are already confident that this is a Type II supernova — that is, the explosion of a single massive star whose core has abruptly collapsed.

A June 2nd spectrum taken with the Keck I telescope reveals that, after allowing for M51's motion away from us at 600 km per second, part of the blast is racing Earthward at high speed. "The shock wave has material moving at a variety of different speeds (typically faster farther out)," explains team member Bradley Cenko (University of California, Berkeley). "The hydrogen that we see moving toward us at 17,600 km per second is probably a pretty good proxy for the fastest material in the outflow." 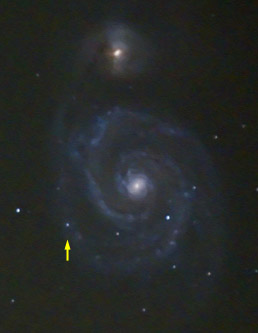 A supernova (arrowed) is obvious in this composite of eight 10-minute exposures recorded on June 3, 2011. At the time it's magnitude was roughly 14½.

Weidong Li and Alex Filippenko (also at UC Berkeley) have identified a likely precursor star in Hubble Heritage images of M51 taken in April 2005. Their analysis suggest that the exploding star, now designated SN 2011dh, was likely a yellow supergiant with a mass of 18-24 Suns and a visual magnitude of 21.8.

Interestingly, the supernova that erupted in one of the Whirlpool's arms six years ago was also a Type II event. A third, somewhat-brighter detonation occurred in 1994. (For those keeping score, that's three supernovas in 17 years!)

Roughly 31 million light-years distant, the face-on Whirlpool is currently high in the northern evening sky and well placed for viewing. SN 2011dh's J2000 coordinates (in Canes Venatici, near Ursa Major) are right ascension 13h 30m 5.1s, declination +47° 10′ 11″. It's positioned 2.3 arcminutes east and 1.5 arcminutes south of the galaxy's center, roughly midway between a pair of comparably bright field stars, and should remain visible for a few weeks.

This is a very exciting scientific discovery, to which amateurs can further significantly contribute! We at the Palomar Transient Factory seek more image data of M51 obtained between May 30 and June 2, 2011. So, if you have imaged this galaxy using a telescope and a digital camera, your data may be very useful to this project! Helpful data would be:
* only if it is of M51 between May 30 and June 2
* only if it is has an accurate time stamp

In case such data exists, please send the raw images, specify the filter(s) used and if possible send images of the same field taken with the same instrument and telescope before May 30, all to: ptf11eon@gmail.com

Your help could be crucial for great scientific discoveries! we will not use any data without permission, and will of course credit all useful images.

Iair Arcavi and Avishay Gal-Yam (for the PTF)

around 03:02 (GMT+1), 25th May, I saw a flashing star around the area of M51. It was like a bright star shining up and fading, and it lasted no more then one second. The event was in my averted vision area.

I am wondering if there is a camera somewhere that recorded the event.

You probably will have caught an artificial satellite. The SN was not seen on pictures taken as late as May 30th.

By pure coincidence, I took a photo of the same galaxy on June 1st around 22h UTC, but when processing it, I did not bother checking for SNe, it was one of my first successful attempts in galaxy photography through a DSLR at all. Sure enough, the SN is on the picture, but the French friends took the credit, and deservedly so. Taught me a lesson.

Here's a link to my picture: http://www.netcologne.de/~nc-kreuerdi/M51.jpg.

Is there a current (June 10) observation of its magnitude?

One can take a look at the LC and the brightness values since the start of the explosion via the AAVSO LightCurve Generator:
http://www.aavso.org/lcg/plot?auid=000-BKC-239&starname=SN%202011dh&lastdays=&start=2455710&stop=&obscode=&obscode_symbol=2&obstotals=yes&grid=on&visual=on&v=on&fainterthan=on&unvalidated=on&pointsize=1&width=800&height=600&mag1=&mag2=&mean=3&vmean=3

Always great to hear about what amateurs are discovering. Tim Reiland is a member of one of the Amateur Astronomers Association of Pittsburgh (AAAP), one of the NASA Night Sky Network's most active astronomy clubs. The club will be showing views of the supernova this (June 17th) weekend.

June 15th wasn't the maximum brightness of the M51 supernova sn2011dh. Last night (JD 2455733.80) there were AAVSO V observations measuring 12.553 +/- 0.020. From here in Montana it looked even more impressive than your most impressive blinking image showed. It looks like sn2011dh will remain bright for a few more days. 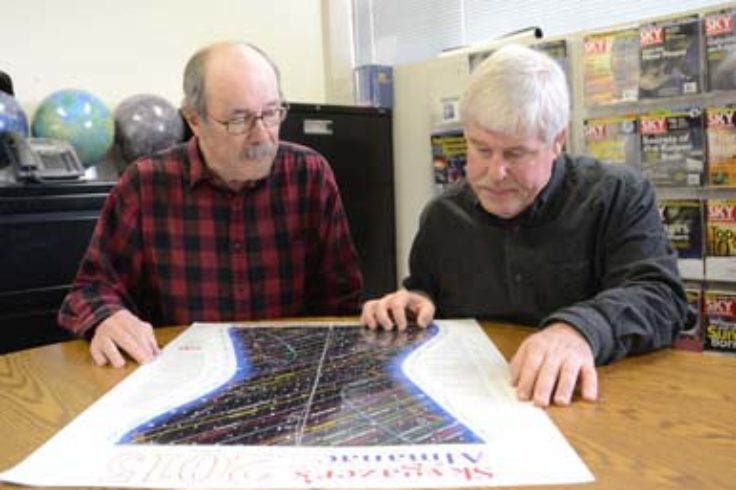