Now in its 8th year, Globe at Night is a worldwide star-counting exercise that you can do alone or with your family and friends. In the process, you'll be helping scientists gauge the extent of light pollution. 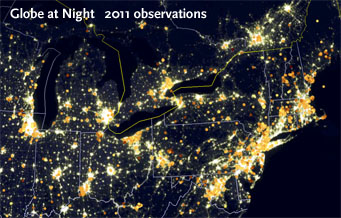 Observations by volunteer skygazers during the 2011 Globe at Night campaign (colored dots) appear over a nighttime satellite composite image of the Northeast U.S. and southern Canada.


Globe at Night
Yesterday I was interviewed about light pollution by a local reporter. It happens a lot — I've gotten a "reputation" around New England for caring a lot about the night sky and how many stars we've lost to the artificial skyglow. But I'm just a minor leaguer compared to Connie Walker, a science-education specialist at the National Optical Astronomy Observatory who's championed dark-sky awareness year after year with unflagging zeal.

Connie's biggest effort is called "Globe at Night." It's a worldwide campaign to raise public awareness of the impact of light pollution. Unlike many other such citizen-science efforts to aid astronomy, this one actually gets you out under the night sky. The goal is simple: take a quick-and-easy measurement of how dark your sky is, then submit that observation to the project's website.

Here's how it works. First, you'll need a clear night with minimal interference from moonlight. Next, go outside at least an hour after sunset — say, 8:30 p.m. or later here in the U.S. — and estimate the limiting magnitude of your night sky. Don't forget to give your eyes some time, at least 10 or 15 minutes, to adapt to the darkness.

Globe at Night makes it easy to determine the darkness of your night sky. These charts show the visibility of stars in Leo when the sky's limiting magnitude is (top to bottom) 3, 4, and 5.

Bring a red flashlight to compare what you see in the sky to your own star charts, or you can download a set of simple comparison maps from the Globe at Night website. Then jump online to report your observation. You'll need to know your latitude and longitude, but the website has a mapping tool to help you figure that out.

It's so easy that even a child can do it — and that, actually, is one of the program's goals. Although you can participate in GaN solo, it's far more fun to do it with friends and family. Admit it: haven't you often tried to get those close to you to share your passion for the night sky? Well, here's your ticket.

The whole process takes as little as 20 minutes — and half of that is spent letting your eyes adjust. Surely you can coax your spouse, children, or neighbors outside for that long! You can take multiple measurements too, at different times during Moonless evenings for the next five months: January 3rd to 12th, January 31st to February 9th, March 3rd to 12th, March 31st to April 9th, and April 29th to May 8th. Gauge the sky's darkness using target stars in and near Leo and those of you Down Under should use Crux.

I always get a tingle of pride when, after submitting my observation, I zoom into the website's world map and find a dot in my backyard. Last year's Globe at Night campaigns garnered 16,850 observations were taken by participants in 92 countries. This year, Walker is aiming to collect another 15,000. Recently the project added an app that lets you use your Smart Phone, and volunteers have translated the instructions into as bunch of other languages — among them Slovak, Swedish, and Galacian!

New this year is an "Adopt a Street" add-on that encourages you and other volunteers you enlist to make observations at different locations within your town. The aim is to take measurements every mile or so for the length of a major street, Walker explains. These measurements can be used by researchers when tracking wildlife, health, and energy consumption. "Having comparisons of the same locations year after year provides the database we need to monitor changing light-pollution levels," she adds. I sometimes take a reading in early evening and then again late at night, to see if the sky gets darker after everyone around me goes to sleep.

The combined observations from past Globe at Night campaigns show a worrisome trend: participants' evening skies seem to be getting brighter.

The chart here shows how the Globe at Night data are stacking up. Do you see how brighter skies (limiting magnitudes 1, 2 and 3) are generally on the increase, while darker skies (4, 5, 6 and 7) tend to slope downward? This is not good news — generally participants' skies have gotten brighter over time. Maybe more reports have come from cities over time, but Walker notes that 60% to 85% of the measurements have come from the same areas of U.S. and Europe.

As I told my interviewer yesterday, light pollution is being fought at every level, from urging the adoption of outdoor-lighting standards at the national and state level down to educational efforts in local neighborhoods and communities. "One person's involvement can make a difference," I said. Can I count on yours for Globe at Night?

For watts and amps
We’ve turned on the lamps
At each step, landscape and pinnacle
To light path, flora, every tower

And so we’ve rid the night
Of glory celestial once so bright
Though in memories past we recall with delight
The finery of globes, nebula, stars, assembled well above

In these times we’ve exchanged
The glory of the heavenly lights
For watts and amps
We’ve turned on the lamps
At each step, landscape and pinnacle
To light path, flora, every tower
And so we’ve rid the night
Of glory celestial once so bright
One is gained the other lost
The lights of heaven carry the cost

Not sure about the title of this aricle, "Take a Stand Against Light Pollution!"
Taking a survey about sky brightness isn't going to do much to combat light pollution. Seems like the only real way to fight light pollution is through ordinances and awareness of sources of light pollution and corrective measures.

Hello, my husband and I would like to participate but it's now May 16th. Is this survey over until next year?