Have you seen the zodiacal light? It's surprisingly easy if you can find a dark location with an unobstructed horizon to the west (for evening viewing) or east (in the morning). 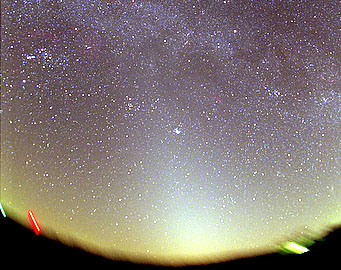 The pyramid of pearly light reaching from the horizon through the Pleiades (just right of center) is the zodiacal light.

Taking the Moon into account, the windows for evening viewing in 2013 are roughly:

You might be able to see the zodiacal light one evening before these periods start, at the cost of having your session cut short as the just-past-full Moon rises. And you might stretch these one evening longer if you're willing to wait until the thin crescent Moon has set.

Go out in evening twilight and look to the west. As the Sun's glow fades, it will also change shape. The bright glow along the horizon will disappear, leaving a huge, tall pyramid of diffuse light leaning slightly to the left along the line of the ecliptic. That's the zodiacal light — it's a lovely sight.

The zodiacal light is an amazing sight when you can see it clearly. However, this requires an exceptionally dark sky.

The first time I ever saw the Zodiacal light in all its glory was in September one year in the pre-dawn sky near the entrance of the Grand Canyon National Park. There was Jupiter rising in the east, surrounded by an amazingly bright, conspicuous glow. Of course, the transparency and darkness of the sky was exceptional.

The most recent time was a February evening just east of the Salton Sea in southern California, at the edge of the Colorado Desert.The Zodiacal light was actually brighter and more conspicuous than the winter Milky Way. How that can be, and yet still be more difficult to see than the Milky Way, I do not understand, but that's how it was. While the Milky Way appeared to be a pure white color and had well-defined boundaries, the Zodiacal light was obviously reddish, and it was impossible to specify any definite boundary - it just faded gradually to nothing at its edges, while its center was the brightest glow in the sky.

In less-perfect skies you may well see a faint glow of the Zodiacal light, but to see it in all its splendor you must go to a desert or other isolated spot.

As beautiful a sight as the zodiacal light is, I'm still waiting to glimpse the full zodiacal band (horizon to horizon) and the embedded gegenschein. Truly pristine skies are need to observe these sky glows.

I'm lucky enough to live not far from some really dark skies in central Nevada. I remember the first time I realized that I could see a zodiacal band connecting some of the planets. I had not heard of the gegenschein, but at the time had the distinct feeling that there was a brighter glow at one point. So I noted where that area was among the constellations and later when I got home, checked a computer star atlas (Sky Map) and realized that point corresponded to the anti-sun point for that night. Amazing! Still nice to take a break from the telescope to just notice these sights by naked eye!