On the night of February 28th, skywatchers in the Americas will be treated to an especially close pairing of a waning gibbous Moon with Virgo's alpha star. Those positioned in Central and South America might even see Spica occulted. 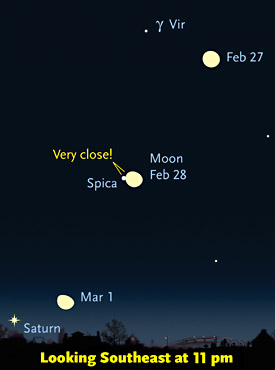 The night of February 28th features an especially close pairing of Spica and the Moon.

Every month the Moon dutifully cycles all around the sky, and we scarcely pay attention to which stars might be in its immediate vicinity.

However, late on the night of Thursday, February 28th, a waning gibbous Moon passes very close to Spica, the alpha star in the constellation Virgo, the Maiden. In fact, they'll be close enough that the Moon's eastward orbital motion should be apparent hour by hour.

The lunar disk is 86% sunlit, which ordinarily creates so much glare that your eye can't pick out nearby stars. But icy-white Spica is a 1st-magnitude sparkler that should hold its own as the Moon draws near. The views through binoculars or a small telescope should be excellent.

Skywatchers in the Americas have the best seats for this late-evening show, but the pairing's closeness depends on both your latitude and longitude. The farther south and west you are, the better. 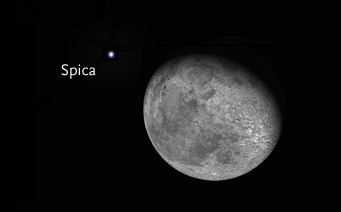 This view simulates what skywatchers in Los Angeles will see around 9:45 p.m. PST on February 28th. The Moon occults Spica from portions of Central and South America.

For example, from Los Angeles the Moon appears less than 10 arcminutes to Spica's lower right at about 9:30 p.m. PST, not long after the two rise on the 28th. But from Boston the Moon passes slightly farther away, 30 arcminutes (one lunar diameter), at about 1 a.m. EST on March 1st.

If you happen to be along the Pacific Coast of Mexico or Central America, or anywhere in central South America, the Moon occults Spica. From Acapulco, Mexico, Spica disappears behind the Moon's bright northern limb at 11:21 p.m. local time on February 28th and reappears from behind the dark limb 37 minutes later.

For occultation times and circumstances for cities throughout Central and South America, see IOTA's posting for this event.

Due to the Moon's current path among the stars, occultations of Spica occur throughout 2013. But the only one particularly favorable for North America doesn't occur until November 29th.

Can This Near-Earth Asteroid Help Us Understand the First Interstellar Visitor?