The upcoming transit of Venus is your chance to relive history.

The upcoming transit of Venus isn't just an opportunity to witness one of the rarest spectacles in astronomy, it's also your chance to relive some of the most inspiring, dramatic, and tragic stories in astronomy lore. The history of efforts to predict, observe, and precisely measure transits of Venus also showcases the rapid progress in human knowledge of the solar system brought about by the Scientific Revolution.

The First Transit Predictions and Sightings 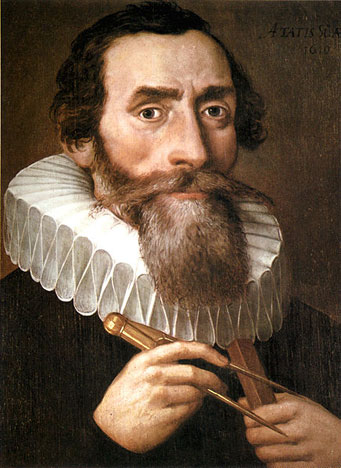 Johannes Kepler was the first astronomer to predict the transits of Mercury and Venus across the face of the Sun.

The story begins with the great German astronomer Johannes Kepler (1571-1630), who was the first human to successfully predict transits of both Mercury and Venus. Remarkably, his calculations of planetary motions (based largely on observations from Tycho Brahe) enabled him to accurately predict a transit of Mercury on November 7, 1631, and a transit of Venus just a month later, on December 6th. Sadly, Kepler died a year before these events, so he was unable to personally confirm his predictions. (Note: all dates in this article use the current Gregorian calendar.)

Fortunately, three astronomers in Europe, most notably French scientist and priest Pierre Gassendi (1592-1665), witnessed the transit of Mercury. In doing so, they became the first humans to view a planetary transit with a clear understanding of exactly what they were seeing. Gassendi also looked for the predicted transit of Venus, but the transit had already ended before the Sun rose from his Paris location.

Sadly, no documentation exists of anyone in the world seeing the 1631 transit of Venus — a missed opportunity. Given the fact that Venus's silhouette is big enough for people to see with their naked eyes, it's likely that a few people around the world saw Venus as they glanced at the Sun (particularly around sunrise or sunset). But without access to the published materials possessed by a small number of educated Europeans, they would not have recognized what they were seeing. 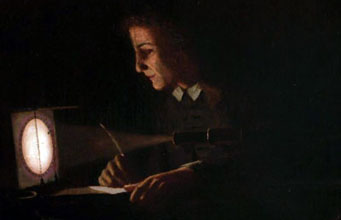 Jeremiah Horrocks predicted and observed the first recorded transit of Venus in 1639, as imagined here by painter J. W. Lavender.

The story takes a dramatic turn just 8 years later. A brilliant English astronomer named Jeremiah Horrocks, at the tender age of 20, discovered inaccuracies in Kepler's published tables of planet and star positions. By the autumn of 1639, his meticulous calculations revealed that a transit of Venus would occur in only a month's time: on December 4th. Kepler had failed to predict this crucial event.

Being a diligent scientist, Horrocks realized his calculations might be slightly off, so he looked for the transit a day ahead of time from his home in the hamlet of Hoole (now Much Hoole), just north of Liverpool. But his calculations were virtually bang-on, an incredible achievement given the fact that he had to perform all of his calculations by hand. 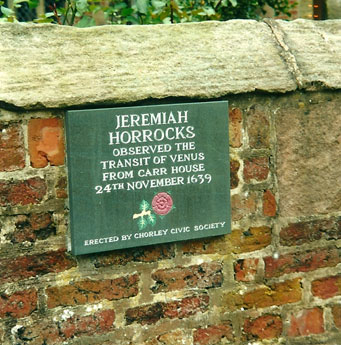 A plaque hangs at the entrance of Carr House (which still stands), where Horrocks made history. The inscribed date, November 24, 1639, is from the old Julian calendar. Modern calendars record the date as December 4th.

On December 4th, Horrocks was called away to his local church around 1:00 p.m. to perform an official function. When he returned to his house around 3:15 p.m., he secured his rightful place in the annals of astronomy history. The transit was already in progress. Using a small refractor to project an image of the Sun, he was able to observe the transit for about half an hour before the Sun set below his horizon. He carefully measured Venus's angular diameter to be 1.3 arcminutes across, which was 10 times smaller than expected. His observations also refined human knowledge of Venus's orbit.

Prior to the transit, Horrocks sent a letter with his prediction to his friend William Crabtree, who had been a fellow student at Cambridge University. Crabtree observed the transit from his home in nearby Manchester. Crabtree, however, was so overcome with emotion that his notes contributed little to science. Still, Horrocks and Crabtree became the first humans to see a transit of Venus while recognizing the event's true nature. There are no known records of anyone else in the world predicting or witnessing the 1639 transit.

Tragically, Horrocks died of unknown causes just 14 months after the transit, leaving historians to speculate on what this incredibly talented scientist might have accomplished had he enjoyed a longer life. Crabtree died a few years later, in 1644, at the tender age of 34. 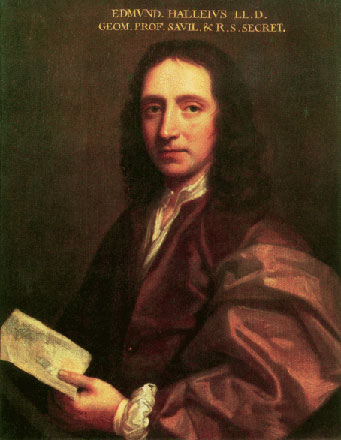 Edmond Halley devised an ingenious method to calculate the scale of the solar system by observing the transits of Venus from both hemispheres.

The next chapter in our story begins on November 7, 1677, when legendary English astronomer Edmond Halley (1656-1742) observed a transit of Mercury from the South Atlantic island of St. Helena. Halley quickly came up with an ingenious idea for using future transits of Mercury or Venus to measure Earth's distance to the Sun, known as the astronomical unit, or a.u. for short.

Halley waited until 1716 to publish his paper, and he did so in Latin to make sure that astronomers all over Europe could understand his idea. His idea is simple in concept. Thanks to Kepler's laws of planetary motion, astronomers in the early 1700s knew the relative distances of the planets from the Sun. If they could only measure the absolute distances between two planets, they could easily calculate distances around the solar system, including the a.u.

Halley's paper demonstrated that if observers at widely separated latitudes could precisely time the duration of a transit of Venus by recording the times of second and third contact, they would measure slightly different durations. These results would translate into slightly different path lengths (or chords) of Venus as it crossed the Sun's disk. Using this discrepancy, astronomers could use simple high-school-level geometry to triangulate the distance to Venus. This in turn, would yield the a.u. And if astronomers could calculate the a.u. to high precision, it would essentially unlock the scale of the solar system, allowing astronomers to measure the diameters of all the planets, and the masses of every planet with at least one moon. 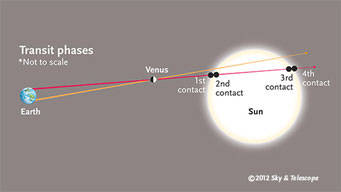 Astronomer Edmond Halley suggested using transits of Venus to measure the scale of the solar system. Observers at different locations on Earth would measure slightly different path lengths for Venus as it transited the Sun. Then using simple geometry, observers could calculate Earth's distance to the Sun.

Knowing he wouldn't live long enough to witness the predicted June 6, 1761 transit of Venus, Halley concluded his paper with these rousing words:

I recommend it therefore again and again to those curious astronomers who, when I am dead, will have an opportunity of observing these things, that they remember my admonition, and diligently apply themselves with all imaginable success; in the first place, that they may not by the unreasonable obscurity of a cloudy sky be deprived of this most desirable sight, and then, that having ascertained with more exactness the magnitudes of the planetary orbits, it may redound to their immortal glory. 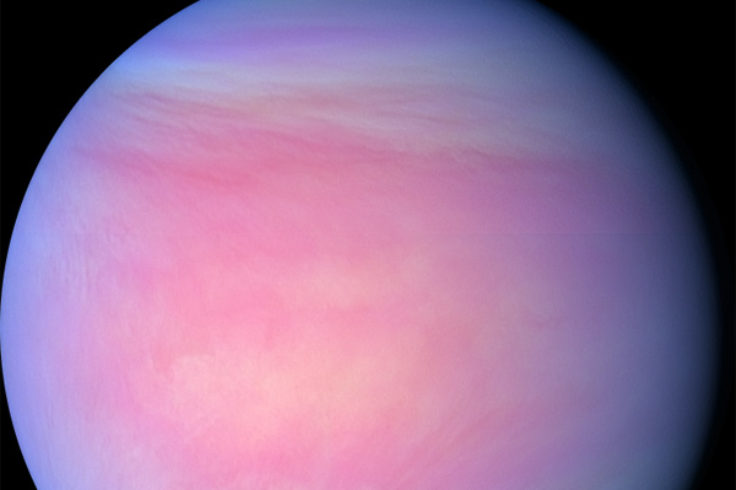 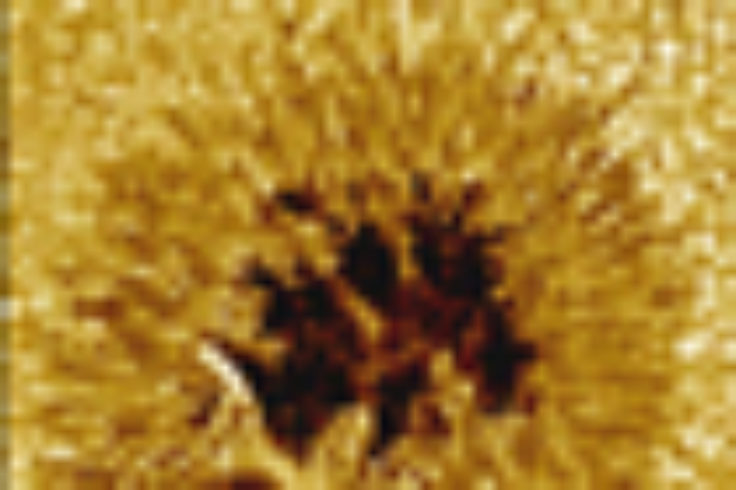 How to Build a Galaxy