The third and final chapter of transits of Venus in history. 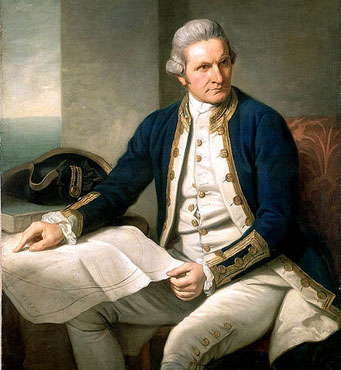 James Cook led an expedition to Tahiti on the HMS Endeavor.

Despite the disappointment from 1761, astronomers were eager to try again for the June 3-4, 1769 transit, when Europe was generally at peace. One major British expedition was led by Lieutenant (later Captain) James Cook (1728-1779). Accompanied by astronomer Charles Green and botanist Joseph Banks, Cook sailed on the HMS Endeavour to Tahiti. Despite relatively cordial relations with the native people, Cook's crew was eventually forced to construct a small fort to protect their scientific instruments from theft. Cook, Green, and Banks successfully observed the entire transit, but their contact times differed due to the black-drop effect. The expedition later explored New Zealand and Australia, although Green perished from dysentery on the way home.

Death was always lurking just around the corner during these 18th-century expeditions, which were undertaken before the advent of modern medicine and transportation. A terrible tragedy befell a French/Spanish expedition led by Chappe, the astronomer who led the successful 1761 expedition to Tobolsk. Chappe arrived in San Jose del Cabo, at the tip of the Baja California peninsula in Mexico, in time for the transit. Chappe and his men successfully observed the transit, but an epidemic (perhaps typhus or yellow fever) was sweeping through the area. Ultimately, 26 of the 28 travelers (including Chappe) made the supreme sacrifice for the cause of science; only two expedition members survived to return the precious data to Paris.

Le Gentil had his own brush with death after a failed attempt to observe the 1769 transit. After the disappointment of seeing the 1761 transit at sea, he made the courageous decision to remain in the region rather than return to France. He spent the next several years studying the flora, fauna, geology, and anthropology of Mauritius and Madagascar, and planned to observe the 1769 transit from Manila in the Philippine Islands, where the entire event would be visible. He boarded a Spanish warship and arrived in Manila three years before the transit. So far, so good.

The French Academy of Sciences ordered Le Gentil to return to the port of Pondicherry to observe the 1769 transit. Fortune once again failed Le Gentil, and the skies clouded out his second attempt to observe the transit of Venus.

But once again, fortune was not on Le Gentil's side. The French Academy of Sciences sent him a letter ordering him to sail for Pondicherry, which was now back in French hands. This was despite the fact that only Venus's egress would be visible. Le Gentil arrived in March 1768, more than a year before the transit. Le Gentil had plenty of time to set up his equipment and precisely measure his longitude. And for a full month before the fateful transit day in 1769, the skies were perfectly clear. But on the morning of the transit, clouds rolled in and completely ruining his view. In a clear demonstration of Murphy's Law, it was perfectly clear in Manila.

Le Gentil later wrote, "I was more than two weeks in a singular dejection and almost did not have the courage to take up my pen to continue my journal; and several times it fell from my hands, when the moment came to report to France the fate of my operations." 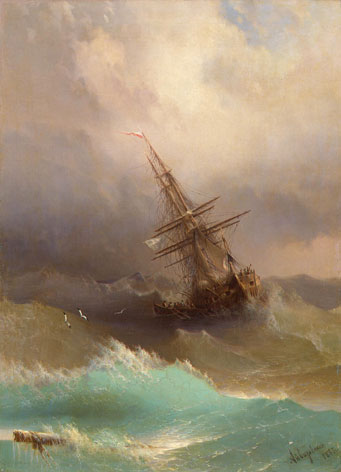 Stormy seas were just one of the many plagues Le Gentil faced in his attempts to observe the transit of Venus.

This indefatigable astronomer finally headed home to France, but not before nearly succumbing to disease and then being forced back to Mauritius when a severe storm nearly sank his ship as it rounded the Cape of Good Hope. Sailing on a Spanish ship, he finally reached the port of Cadiz, Spain, in 1771. He completed the final leg of his journey on foot, crossing the rugged Pyrenees Mountains en route to Paris.

After being away 11½ years, he was presumed dead. His heirs were dividing his estate, and the Academy demoted him to the status of retiree! Fortunately, Le Gentil's story has a happy ending. He undertook successful legal action to win back his property, he won back his rank at the Academy, he married and raised a daughter, and he published his memoirs before dying a peaceful death at age 67 just as the French Revolution was heating up.

Ultimately, the 1769 transit expeditions were plagued by the same black-drop effect that had marred the 1761 results. German astronomer Johann Franz Encke (1791-1865) later compiled many different observations of the 1761 and 1769 transits, and using updated longitudes, calculated a value for the a.u. that was just 2.5 percent higher than the modern value. This was the best measurement for several decades, but it did not approach the accuracy and precision envisioned by Halley. Despite all the hardship and heroic sacrifice, the 18th-century transit expeditions were at best a partial success.

Transits in the Modern World

Astronomers also journeyed around the world for the 1874 and 1882 transits. Travel had become much safer and faster at that time, and expeditions could use telegraphs to communicate rapidly across the globe. The 19th-century expeditions also brought superior telescopes and instruments, and they even had cameras and crude devices for cinematography.

The black-drop effect, as recorded by Australian watchmaker F. Allerding on December 9, 1874.

By this time, the United States had become a major player in astronomical research. Expeditions funded by Congress and organized by the U.S. Naval Observatory sent highly capable astronomers (such as Asaph Hall, Simon Newcomb, and William Harkness) and modern equipment to far-flung locations. The 1882 transit was visible throughout the U.S. and was observed by preeminent astronomers such as Maria Mitchell, E. E. Barnard, and Henry Norris Russell (then age 5). Amherst College astronomer David Peck Todd took the best images ever obtained of Venus in transit from Lick Observatory in 1882 . Other nations in the Western Hemisphere also contributed to the global effort.

But despite the tremendous advancements in technology and the greater level of participation, the black-drop effect ultimately prevailed. The actual value of the a.u. was pinned down using parallax measurements of Mars and asteroids, and ultimately, by radar ranging to Venus and other bodies.

By the time of the June 2004 transit, the tremendous advancements in astronomical knowledge meant that transits of Venus were events more geared toward curious observers than professional researchers. Still, satellite and ground-based measurements of the 2004 transit helped show that solar limb darkening contributed to the black-drop effect, and yielded some new insights into the atmosphere of Venus. And several teams of professionals are gearing up for the June 5th/6th transit, which will help astronomers better understand the technique of discovering and characterizing extrasolar planets that transit their host stars. 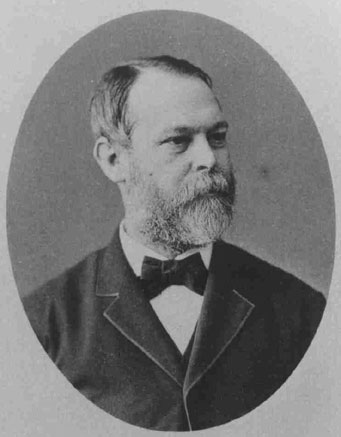 As we prepare for the upcoming transit, I can't help but think of what the world will be like during the next pair of transits in 2117 and 2125. Will human civilization have spread to Mars and other planets, or will our descendants live in a new Dark Age because of environmental degradation or some other large-scale disaster? William Harkness of the U.S. Naval Observatory summed up the transit experience as well as anyone as he prepared for the 1882 transit:

We are now on the eve of the second transit of a pair… When the last transit season occurred the intellectual world was awakening from the slumber of ages, and that wondrous scientific activity which has led to our present advanced knowledge was just beginning. What will be the state of science when the next transit season arrives God only knows. Not even our children's children will live to take part in the astronomy of that day.