Asteroids are fun to observe, but they usually take a little work to locate. Not so for the last four evenings in August, when Vesta, the brightest of the asteroids, passes within a finger's width of brilliant Jupiter. The pair will fit nicely in a single field of view through most telescopes at low magnification. And you should be able to see Vesta through steadily supported binoculars if you can catch it after the sky is reasonably dark but before it gets too low — a tricky balancing act. 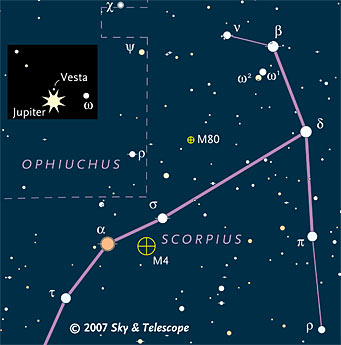 At closest approach, on August 29th, Vesta appears just 0.4° from Jupiter, less than four times as far as Callisto, Jupiter's outermost moon. And the asteroid will be within 0.6° of the planet from August 28th to the 31st. That's the width of a typical telescopic field of view at 80×.

At magnitude 7.2, Vesta is significantly dimmer than Jupiter's moons. But it's much brighter than any star in its vicinity, so it's pretty hard to miss. If you have any doubts, refer to the charts at right. In binoculars, finderscopes, and small rich-field telescopes, Vesta forms a very distinctive pattern with Jupiter and 4th-magnitude Omega (ω) Ophiuchi. Remember that many telescopes show things upside down or with left and right reversed. 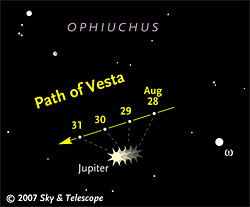 This chart is accurate for 9 p.m. CDT. Observers in Europe will find Vesta to the right of the plotted positions. The field is roughly 3° × 2°.

A fun project is tracking Vesta from one night to the next — or even just for the few hours between dusk and when Jupiter sets. If you look carefully, the asteroid's motion through the stars should be quite obvious. Just remember that Jupiter is moving too! But the planet is nearly three times more distant than the asteroid, so it moves through the stars more slowly.

While you're there, don't forget to check the motion of Jupiter's moons. For the last four evenings in August, Callisto remains aloof on the far east (left as seen through binoculars from the Northern Hemisphere). Meanwhile, Io, Europa, and Ganymede dance madly around the planet, trading places particularly rapidly on the evening of the 29th. Use our Javascript utility to check their positions at any particular time.