Observers in North America have a rare opportunity to observe an extremely thin crescent Moon paired with Mercury very low in the west shortly after sunset on Wednesday, February 22, 2012. 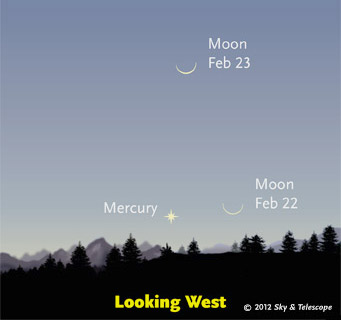 The Moon will be just 24 hours old in Nova Scotia, and 28 hours old on the West Coast. This is nowhere near a record young Moon, but it's a lot younger and thinner than most people have ever observed. Seeing such a faint pencil line in the sky is a startling experience.

You need three things for this sighting: clear air, a site with a completely unobstructed western horizon, and binoculars. The binoculars aren't strictly necessary; in good conditions both Mercury and the Moon should be visible to the unaided eye. But they're a huge help for spotting the pair.

Go out at or immediately after sunset, and start scanning the sky 5° to 10° (one or two binocular fields of view) above the spot where the Sun disappeared. It's forecast to be cloudy in my area, so I won't have a chance, but I practiced up yesterday (Monday) spotting Mercury.

I first caught Mercury in binoculars 12 minutes after sunset, but I couldn't spot it naked-eye until 25 minutes after sunset. It remained just barely visible for the next 10 minutes, by which point is was quite low in the sky. On Thursday Mercury will be 1.5° higher, which may not sound like much. But it should make the observation much easier.

I'm curious whether Mercury or the Moon will be easier to see. The Moon will be 40 times brighter, but its light will be spread over a much bigger area. Please let me know how it looks to you.

In Europe and Western Asia, this will indeed be close to a record-young Moon -- something made possible by the fact that the Moon will be almost directly above the Sun. For detailed information, see the Islamic Crescents' Observation Project website. Months in the Islamic calendar traditionally begin when the young Moon is actually sighted, so Islamic astronomers are the world's experts in predicting its visibility.

If you miss this Moon, it will still be remarkably thin — and much easier to spot — on Thursday evening.

See also my 5-minute TV program on this event, or watch the 3-minute version on You Tube below.