In the early days of interplanetary exploration, engineers on both sides of the Iron Curtain lost many spacecraft to malfunctions but, by dint of sheer numbers, still managed to achieve memorable firsts and successes. 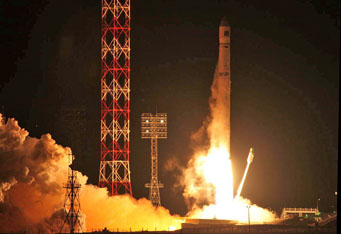 A Zenit rocket lifts off in the predawn hours of November 9, 2011, from the Baikonur Cosmodrome in Kazakhstan. Aboard are the Phobos-Grunt spacecraft and two smaller payloads.


Roskosmos
These days there's lots more riding on every launch, and so it was with great expectation — and trepidation — that Russian planetary scientists watched a two-stage Zenit rocket roar skyward early on November 9th (20:16 Universal Time on the 8th). Its main payload was Phobos-Grunt, Russia's first interplanetary undertaking in 15 years.

Unfortunately, after the Zenit did its job, a Fregat-derived upper stage did not. It failed to propel the spacecraft away from Earth and toward Mars. (This failure came to light not from official Russian announcements but rather from Western satellite trackers, who noticed that the craft's orbit didn't change after the times of two planned firings.) As of this morning, the spacecraft-rocket combo remains stuck in an extremely low orbit that's inclined 51° to the equator and ranges from 210 to 128 miles (339 to 206 km). 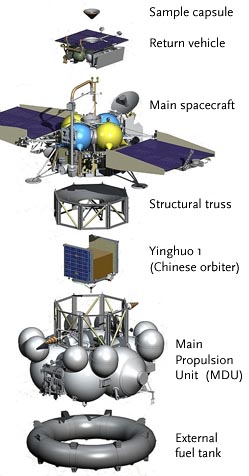 An exploded-view schematic diagram of the Phobos-Grunt spacecraft and the rocket engine that failed to propel it toward Mars.

According to unconfirmed reports, a few hours after liftoff Phobos-Grunt radioed that its solar panels had deployed and that all systems were functioning well. But in the two days since, no one has heard from the spacecraft. Efforts to reestablish contact, using both Russian ground stations and those of the European Space Agency, have been unsuccessful.

The current parking orbit is too low to be stable. Unless Russian engineers can get that engine to fire, it will all reenter in about three weeks. Unfortunately, the assembly contains about 10 tons of the highly toxic propellants unsymmetrical dimethylhydrazine and nitrogen tetroxide.

The Phobos-Grunt mission was both ambitious and complicated, fraught with long delays due to downsizing of the Russian space effort and a host of technical challenges. The timeline called for the spacecraft to begin orbiting Mars next September, to land on the little moon Phobos in February 2013, and to return a capsule with several ounces (200 g) of soil in August 2014. (The Russian word grunt can be translated as either "soil" or "ground," so here I'm using the mission name that most sources have adopted.)

Also on board are two hitchhiker payloads: a small orbiter called Yinghuo 1, intended to be the first Chinese craft to reach Mars; and the Living Interplanetary Flight Experiment, funded by the Planetary Society, designed to transport a small sealed container with 10 types of microorganisms to Mars and back. 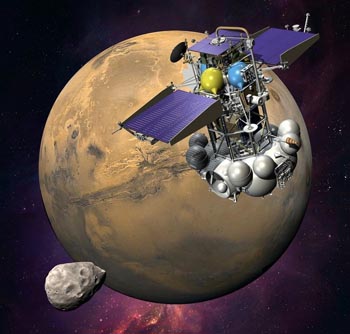 Had its mission succeeded, the Phobos-Grunt spacecraft would have reached Mars in October 2012, landed on the small moon Phobos (at lower left) in February 2013, and returned to Earth with surface samples in August 2014.

The difficulties with Phobos-Grunt is hauntingly identical to the fate of the Mars 96 mission almost exactly 15 years ago. On November 16, 1996, the craft's Proton launcher placed it in a parking orbit as planned, but the upper stage failed to fire and four hours later the craft came crashing down over the Atacama desert near the Chile-Bolivia border. Prior to that, a pair of craft bound for the same Martian moon were both lost. Phobos 1 was en route to the Red Planet when a flawed software update deactivated its thrusters; Phobos 2 reached Mars and was just days from dispatching two landers onto the satellite when, mysteriously, contact with it was lost.

And so the Russians' string of bad luck with their Mars missions continues. Maybe there really is a "Great Galactic Ghoul" that gobbles up Mars-bound spacecraft without warning.

By the way, I have only scratched the surface of this sad and unfolding space drama. For fuller accounts, check out the postings of the Planetary Society's Emily Lakdawalla and RussianSpaceWeb.com's Anatoly Zak.

QUOTE: "In the early days of interplanetary exploration, engineers on both sides of the Iron Curtain lost many spacecraft to malfunctions but, by dint of sheer numbers, still managed to achieve memorable firsts and successes."

Um, not quite. In the early days, it was a learning curve. It was NOT as you suggest: 'by dint of sheer numbers' - no, not at all. And let us never forget how very successful we, America, was with our Moon visits. We even visited the Moon regularly.. and even started bringing our cars..! Yes - we truly were.. for a short time in the late 1960s and early 1970s, an 'Interplanetary Society'. Driving right up to the Hadley Rille.. exploring the Moon.. Man is VERY capable of exploring the solar system.

This entire article is pretty sadly written. Science..? NOT..!

Duuuude - grow a sense of humor. The "Great Galactic Ghoul" is an inside joke going back over forty years, to the early Mars-mission failures referred to in the present article; I understand that it was first proposed in jest by Donald Neff of TIME. A little Googling goes a long way; I found this PDF describing some items in the JPL archives:

The watercolor painting of the Ghoul by G. W. Burton that is mentioned in the above is a little hard to find online; it's reproduced, badly, on page 122 of a scanned PDF of the Voyager Neptune Travel Guide, as part of a discussion of contingency planning and preparations for possible trouble during the Voyager 2 Neptune flyby in 1989:

I first met the Ghoul in the hardcopy of that Travel Guide that I picked up during the flyby; I had the honor of being a grad student on the project at Caltech (down the hall from John Grunsfeld, now the new head of NASA Science Mission Directorate -- a great guy!). We were more worried, as I recall, about human ghouls -- this was shortly after the first major Internet computer worm incident, the Morris UNIX worm of 1988, and IIRC the JPL computer network was completely disconnected from the Internet at large to prevent interference with acquisition of irreplaceable data if another such incident occurred at an inopportune time (I don't recollect how we connected to the downlink stations).