Yesterday was unseasonably cool at the Jet Propulsion Laboratory in Pasadena, California, the nexus of NASA's interplanetary exploration efforts for five decades. 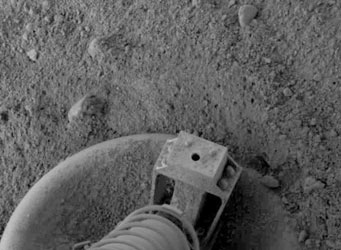 Phoenix's Surface Stereo Imager looked down to the lander's foot shortly after touchdown on May 25, 2008. It appears that the footpad must have slid over a few inches at some point.

But at Vastitas Borealis, the vast lowland plain that surrounds Mars's north-polar cap, it was a quiet spring afternoon and the usual -30°F despite the Sun's warmth. Then something parachuted out of the sky, popped out of a white shell, sprouted three spindly legs and, with a sudden roar of rocket engines, dropped onto the frozen ground. The Phoenix had landed.

In the days ahead a small army of planetary scientists will get to know this area of Mars very, very well.

The landing site is nestled in a gentle valley amid a broad tract of hills called Scandia Colles, at a latitude of 68.2° north and a longitude of 234.3° east (or, if you're following the official IAU convention — which apparently the Phoenix team isn't — 125.7° west). This swath of the Martian arctic corresponds in latitude to northern Alaska or Scandinavia. 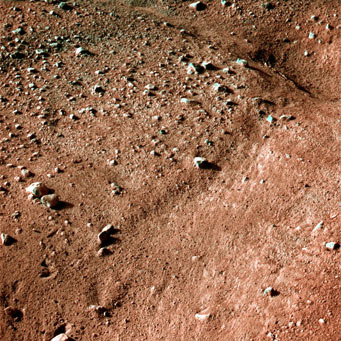 The ground surrounding the Phoenix landing site (in Vastitas Borealis) reveals a polygonal pattern similar to what geologists see in icy ground around the arctic regions on Earth. This image is approximately true color .

It wasn't the first choice for the craft's landing site. Another area, about a third of the way around the pole, looked more promising initially.

But high-resolution images taken in October 2006 by the amazing optics of Mars Reconaissance Orbiter's HiRISE camera revealed that the area was strewn with far too many rocks — and big ones at that — to assure a safe landing. So the team opted instead for a spot in Scandia Colles that looked to be virtually rock free.

Smooth terrain wasn't the only criterion for Phoenix's landing site. To get NASA its money's worth ($420 million) engineers insisted that the site also had to:
· lie between 65° and 72° north;
· have an elevation at least 2.2 miles (3.5 km) below martian "sea level";
· have local slopes no steeper than 16°; and
· have winds no stronger than 45 miles per hour (20 meters per second).

At today's press conference, principal investigator Peter Smith seemed certain that Phoenix will find ice soon after it starts digging in, literally, sometime next week. Why the confidence? Because several years ago a survey by the Mars Odyssey orbiter showed that abundant ice must lie just below the surface in this location.

Odyssey didn't actually see giant slabs of frozen water. But it did find lots of neutrons escaping from the surface; the neutrons indicate hydrogen atoms, almost certainly from water. In fact, this is the landing location that Smith and his team initially chose when they first proposed the mission.

Phoenix can only send data to Earth when one of three orbiters is cruising overhead to relay the signal. So today's cache of more than 100 images weren't yet in hand for the morning news briefing. 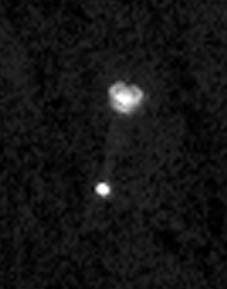 On May 25, 2008, NASA's Mars Reconnaissance Orbiter High Resolution Imaging Science Experiment (HiRISE) looked down onto the Red Planet and snapped a picture of the Phoenix Lander as it parachuted to the surface. Taken from 310 km (193 miles) away, this view shows the 10-meter-wide (30-foot-wide) parachute above the lander.

But one image that mission manager Barry Goldstein did show drew gasps and applause: a view of Phoenix descending toward touchdown beneath its parachute, taken from orbit by MRO's HiRISE camera. The unprecedented snapshot was planned months ago — as forensic evidence in case Phoenix failed to land. Instead, it shows that everything was going well during the craft's descent.

With Phoenix safely on Mars, the work of the engineering team at JPL is largely complete. Now the scene shifts from California to the University of Arizona's Science Operations Center in Tucson, which will control Phoenix during its 90-day primary mission.

Plans call for checks of the craft's seven experiments over the next few days, along with extensive imaging of the surrounding terrain and, especially, the area within reach of Phoenix's 7.7-foot-long robotic arm. The arms should start to "dig in" sometime next week.

It's good that lander got on to the surface safely. I saw it on NASA TV on there website. When PHOENIX starts digging for life, good luck, you aien't going to find anything. No, I do belive that there is life out there, but not in our system.