It's of no consequence, but the Pioneer 10 spacecraft launched on my 9th birthday. Although I don't recall if I noted the event while in the 3rd grade, that was the year I remember becoming interested in astronomy. That year I did a big report on "space" with my then best friend. (I still wonder if there are any remnants of the spray paint we used on the schoolyard blacktop to create our impressive outer-space backdrop for our model solar system.) 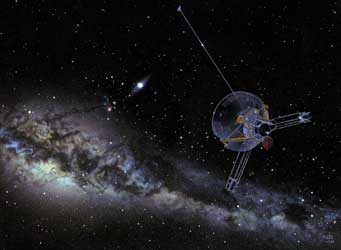 An artist's concept of a Pioneer spacecraft in interstellar space. NASA maintained contact with Pioneer 11 until November 1995 and with Pioneer 10 until January 2003.

During the following 3½ decades, Pioneer 10 and its twin, Pioneer 11, blazed a trail out to Jupiter and Saturn, and then continued onward, well beyond the orbit of Pluto. They eventually fell silent — Pioneer 11 faded out in 1995 and Pioneer 10 lasted until 2003.

But during the mission's many years of operation, tracking specialists noticed something odd: neither craft was exactly where it was supposed to be. After crossing billions of miles in space, they were instead thousands of miles closer to the Sun than expected — a tiny fraction of the distance traveled, but nevertheless significant. Significant enough to have some people wondering if it was a sign of some unknown refinement needed to the theory of gravity, a bedrock of modern physics.

The latest examination of this curiosity concludes that no exotic explanations are required. According to Slava Turyshev (Jet Propulsion Laboratory), some of the retarding force is due to uneven emission of heat radiation from the spacecraft. He described his preliminary findings at a meeting of the American Physical Society earlier in the week, summing up work he's been doing for 15 years.

Turyshev has spent the last several years retrieving archival tracking records from obsolete storage media (those classic magnetic tapes, some of them corrupted) as well as detailed specifications of the Pioneer spacecraft itself from 40 years ago. He likens his searching and discovery to rooting around a dusty attic. "No one told me what I'd be getting into," he says. The Pioneer missions lasted so long that they outlived programming languages and data formats. (The Pioneers were launched in the days of punched cards.)

After piecing together the tracking history, Turyshev and his colleagues created a computer model of the Pioneer spacecraft and determined that they had warm and cool spots not previously modeled well. The uneven emission of infrared photons from the craft's radioactive power sources could account for at least a third of Pioneer 11's anomalous acceleration. (Photons, like other particles, carry a bit of momentum.)

What's still unclear is how the warm surfaces may have physically changed during the decades in space. Space weathering by dust particles, solar wind, and ultraviolet sunlight could have altered the thermal properties of the surfaces significantly, possibly enhancing the effect enough to account for the entire "Pioneer anomaly." The researchers hope to get clues to this by running various computer simulations of their model and by examining 40 gigabytes of telemetry data, which will indicate the state of many systems on the spacecraft, and thus how much power they actually used and how much heat they gave off.

Did the calculations have an error estimate? Maybe just random variations could be enough to account for it?

They still have not made it to the Ort cloud yet, but exactly what have they hit at they have traveled out of the solar system. And how has that changed their speed.

Guess what: what's being presented as a partial solution for the anomaly now has been proclaimed the likely full solution in a paper written 7 years ago - see http://arxiv.org/abs/gr-qc/0107092 for the detailled work performed back then. When the paper came to my attention in 2002 I found it very convincing and couldn't believe ever since why it was ignored by the 'anomaly = new physics' faction ...

I don't know who this JPL gentlemen is, but do you know that it was the Planetary Soc. that gathered up those files of obsolete date from under a stairwell at NASA. They also had to purchace the last old machines capable of reading the material. The Soc. has spent at least a year going back over all the tapes that nobody else would even lift a finger to save. I think that at least they should have been mentioned in the story. This is not the first time that S$T have not given credit to the Soc. when it was due.

I wish some attention would be devoted to spin deceleration anomaly.

Most importantly, has anyone heard of an attempt to verify anomaly by interpretation of New Horizons data.
That should be easy, but apparently not on NASA's priority list.

Thank for the planetary society
http://www.planetary.org/blog/article/00001400/

The outcome of this Pioneer anomaly analysis could guide astrophysics for many years.

Sounds like they rediscovered the YORP effect. In the past few years, the re-emission of thermal radition from irregular surfaces has been used to explain the accleration (and deceleration) of asteroid rotation rates, the formation of binaries among smaller asteroids, and the common alignment of the spin axes of members in a family (e.g., see Slivan papers on the Koronis family). No doubt the irregular shape of the spacecraft along with "albedo variations" have caused the craft to be affected by a YORP equivalent. On a less complex level, the simple "Yarkovsky" effect, which changes the semi-major axis of asteroids (and other small bodies) - also due to thermal re-radiation - could explain the difference between expected and actual distance. It will be interesting to see what they find.