Be skeptical about the hubbub over Tau Ceti and its five planets. 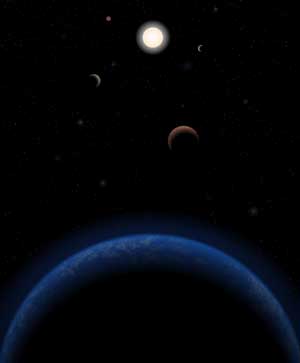 Astronomers might have found hints of five planets orbiting the solar-type star Tau Ceti, but the evidence is still shaky.

Sometimes, we journalists get stuff wrong. I have a well-founded knowledge of that dirty secret: my last job was as a fact checker. So when a press release came out this week announcing a purported system of five planets (with one in the habitable zone) around the solar-type star Tau Ceti (HD 10700), my colleagues and I were skeptical. Astronomers have studied this nearby star for years — at a distance of 11.9 light-years, it’s one of the closest star systems to us — and there’s been no hint of a planet. To go from zero to five sounded rather like conjuring from the ether.

So we went to the source: the actual study and the astronomers who wrote it. The authors are more cautious in their paper. Yes, they announce the detection of five itsy-bitsy signals that might be planets, but they don’t trumpet the planet conclusion from the highest hills. As lead author Mikko Tuomi (University of Hertfordshire, England, and University of Turku, Finland) told me, “I believe the signals are there beyond reasonable doubt. However, their planetary origin is more uncertain, and an independent confirmation is necessary to conclude that we have indeed found planets.”

Let’s step back and look at what the team did.

Tuomi and his colleagues wanted to test a new analysis method for uncovering periodic signals in starlight, created by stars’ tiny wobbles along our line of sight as one or more planets orbits the stars. Such radial velocity measurements are the most successful planet-hunting technique thus far (unless you add in Kepler’s unconfirmed planets, which I don’t).

The astronomers used more than 4,000 archival observations of Tau Ceti by the HARPS spectrograph in Chile, one of the world’s premier instruments for finding exoplanets. To see if their techniques could find small signals hidden in data, they added fake signals to the Tau Ceti observations — Tau Ceti is a quiet star with no known planets, so they figured that using it as a source of “noise” was reasonable.

Cetus the Whale, which the star Tau Ceti forms a part of. A recent report of potential planets around Tau Ceti has people abuzz.

It worked. Kind of: their method spotted the fake signals, but it also found periodic variations in the real data. So they removed the artificial signals and ran their analysis on just the HARPS data. When they did that, they found three signals. Combining the HARPS data with observations from two other instruments — one at Keck, the other at the Anglo Australian Telescope — turned up two more signals, for a total of five.

The team’s analysis determined the signals in the combined data have periods of 14, 35.4, 94, 168, and 630 days (the signals do not show up in more than one data set when the three sets are analyzed independently). The strongest signal is the 35.4-day one, but that’s uncomfortably close to the star’s 34-day rotation period. These signals are also incredibly small, around the same amplitude as the background noise.

HARPS observer Stephane Udry (Geneva Observatory, Switzerland) has his doubts. He says there are interesting aspects of the authors’ analysis, “but a fancy approach is not a guarantee of truth. You have to know intimately your data, and especially their limits.” Coming at data collected by someone else, a researcher might not have that visceral knowledge and could improperly include or exclude parameters that would lead to a false detection. “This paper does not give, with good probability, any (final) answer about the planetary content of the system, but only a first guess.”

Tuomi does not think the signals are artifacts of the analysis; rather, he says the signals appear because his team’s method is more sensitive to weak signals than previous work. Still, he does offer a slew of stellar variations that could create such signals — starspots, pulsations, flares, magnetic cycles, and differential rotation (where the star’s surface has different rotation speeds at different latitudes), to name a few. The final answer will have to wait for follow-up work and further observations.

Caveats aside, it’s good that astronomers are pushing the limits on data analysis. As the recent announcement of a planet around Alpha Centauri showed, new tools could reveal planets where none were detected before. There might well be one or more planets around Tau Ceti. But we shouldn’t jump on the exoplanet bandwagon just because it rolls by.

Speaking of which, you shouldn’t take my word on this stuff: read the paper yourself:

Well that was a very non hyped, balanced report Camile, and I intend to do as you suggest and read more about it, so thanks for the links. In the meantime however my thinking is, Why wouldn’t there be planets orbiting Tau Ceti? Since this star is found to be rotating at a 34 day rate the proto-stellar cloud that it formed from would have also have had to have been rotating too, would it not? Centrifugal force (or more accurately conservation of angular momentum) causes all gravitationally collapsing clouds to flatten into disks, so my question is how could a rotating solitary star not have planets since they are the by-products of star formation itself? I’m not saying that this discovery paper has to be right, but I merely suggest that some form of a planetary system should be present at Tau Ceti even if it still eludes detection ablities.

This a good, balanced artoicle. Sometimes it seems that "science" articles try to scream sensational aspects of any item. What I find amazing is the availability of astronomy research articles online, available to anyone. This not true for other areas of science.

Ok, so after reading the paper I return with the following details: Tau Ceti is classed as a G8.5 V star, mass of around .783 sols, luminosity of about .488 sols, metallicity of -5.5 compared to our sun and a suspected age of 5.8 Gyr. The five proposed planets have minimum masses of 2, 3.1, 3.6, 4.3 & 6.6 earths, periods of 13.9, 35.4, 94, 168 and 630 earth days, and average orbital distances of 0.105, 0.195, 0.374, 0.552, & 1.35 AUs.
What’s significant about this paper is the method Tuomi et al. have found to perhaps tease out the trees from the massive forest of jittery RV measurements. But, note how the mass of the proposed planets increase with distance from the star in a regular fashion. Is this real, or could it be an artifact of the noise suppression method? Let’s hope they’re on to something with this method, but Camile and the rest of the S&T team are right to temper the flames of excitement over this announcement.

Professor Greg Laughlin has posted on this Tuomi et. al. Tau Ceti paper, and here’s the link:
http://oklo.org/2012/12/31/the-tau-ceti-six (The “six” is a typo, only 5 planets were reported.) His explanation for the data reduction method is helpful to people (like me) who are not actual mathematicians. What they used was a math tool very often used with charting stocks and futures involving moving averages. He explains it better so I recommend the link for any who are interested. His post also includes a very helpful graphic which shows were a planet would have to be in the Tau Ceti system to receive the same heating as the Earth. These days it seems that the definition of “Habitable Zone” is being broadened considerably, in spite of there still (and perhaps for a very long time to come) being only one universal example of habitability.