The North Star's closest companion, Polaris Ab, was seen for the first time in this photo shot by the Hubble Space Telescope.

Of the countless stars in the sky, only a handful are known on a first-name basis. The most famous of the bunch has to be Polaris, the North Star. No other naked-eye star hovers closer to the celestial north pole. But this 2nd-magnitude star holds secrets not visible to the naked eye: it's actually a triple-star system, and, at a distance of just 430 light-years, it's the brightest Cepheid variable in the sky.

Polaris's larger sibling, Polaris B, has been known for centuries. Some 18 arcseconds from the North Star, it was first spotted by famed astronomer William Herschel in 1780 and can be seen through modest amateur instruments. The much closer partner, Polaris Ab, an otherwise nondescript solar-type star, had only been recorded by spectrometers and managed to avoid being photographed — until now.

In research presented Monday at the American
Astronomical Society meeting in Washington, DC, Nancy Evans
(Harvard-Smithsonian Center for Astrophysics) and her team explained how they used the Hubble Space Telescope to capture the first-ever picture of this hidden star. With that information, they determined the first direct mass measurement for a Cepheid variable: Polaris weighs in at 4.3 solar
masses, plus or minus 25 percent. 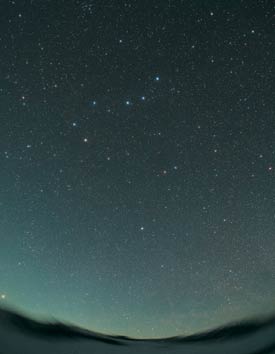 On spring evenings in the Northern Hemiphere, the Big Dipper hangs upside-down in the northern sky. Its pointer stars (the two marking the Bowl's outer edge) trace a line that you can follow down to Polaris, the North Star — itself marking the end of the Little Dipper's relatively faint handle.

Polaris Ab was a tricky star to spot. While spectroscopic studies had told astronomers much about the object, including its orbit, those same observations failed to reveal the separation between the primary and Polaris Ab. The new Hubble images show the companion to be just 3.2 billion kilometers away (2 billion miles), translating to a scant angular
separation of 0.2 arcsecond. Further hampering the detection was the brightness difference between the two, as the light from much smaller Polaris Ab is nearly overshadowed by its supergiant big brother.

While not completely understood, Cepheid variable stars are well known in astronomical circles for acting as the universe's "mile markers." Because the period of a Cepheid's variability is tightly related to its absolute luminosity, astronomers can use the stars' light curves to pinpoint their distances. Learning more about these unique stars is critical to the accuracy of those distance measurements, which have played a key role in determining the universe's age and expansion rate.