A favorite scene from the 1997 science-fiction thriller Contact shows astronomer Ellie Arroway (played by Jodie Foster) sitting with her laptop and using headphones to listen for an alien radio beacon. Her "receiver," a few hundred yards away, is the cluster of giant radio telescopes called the Very Large Array.

Frank Drake has been convinced of the existence of extraterrestrial civilizations ever since his 1930s Chicago childhood. "I could see no reason to think that humankind was the only example of civilization, unique in the universe," he wrote in his 1992 book Is Anyone Out There?

That film reminds us that art sometimes imitates life.

Fifty years ago today, Frank Drake, then a 29-year-old researcher at the National Radio Astronomy Observatory, pointed an 85-foot (26-m) dish at Tau Ceti, a Sunlike star just 12 light-years distant. He'd tuned the receiver to the 21-cm (1420-MHz) — a ubiquitous emission from hydrogen gas that, he reasoned, would be a logical "hailing frequency" for interstellar communication. Drake switched on the dish's amplifier and watched a chart recorder for the telltale squiggles that would signal a radio transmission. The modern search for extraterrestrial intelligence, or SETI, had begun.

Drake called his effort Project Ozma, naming it after the princess in a children's story titled Ozma of Oz. As he recalls in the 1992 book Is Anyone Out There? (coauthored with Dava Sobel), "What we were doing was unprecedented, of course, and no one knew what to expect. Even I, in my fever of enthusiasm, couldn't assume that we would really detect an intelligent signal." Indeed, several hours of listening to Tau Ceti yielded nothing. 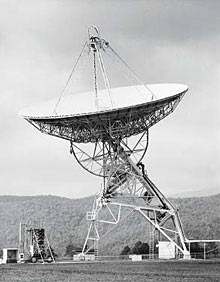 But when Drake slewed the dish over to his second target, Epsilon Eridani, a burst of radio energy caused the recorder's pen to swing wildly. It was a strong, pulsed signal — exactly what they expected to hear from an extraterrestrial civilization trying to attract attention. In the end, however, it proved to be a false alarm, as the receiver had inadvertently eavesdropped on a secret military experiment.

I knew that Drake had written about Project Ozma for Sky & Telescope, but I now realize that the article appeared in the January 1960 issue — months before he conducted the experiment. It's titled "How Can We Detect Radio Transmissions from Distant Planetary Systems?" There he describes a series of assumptions — about how many stars have planets, how many of those might harbor intelligent life, and so forth — that he would soon formalize in what's now known as the Drake Equation.

Meanwhile, the search goes on — and Drake, now at the SETI Institute, is still listening. Click here to peruse Alan MacRobert's digest of all the SETI efforts now under way. In fact, SkyandTelescope.com maintains an entire section of online articles about searching for alien life.