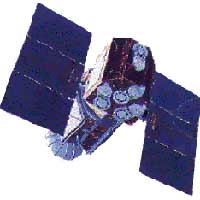 The Extreme Ultraviolet Explorer (EUVE) burned up in the Earth's atmosphere on January 30th.

On January 31, 2001, the Extreme Ultraviolet Explorer (EUVE) satellite was shut down and put into hibernation mode, a victim of a dwindling NASA budget. One year later the craft ended its life completely, burning up upon reentry into Earth's atmosphere over central Egypt.

EUVE was a key component of NASA's space telescope fleet, filling the extreme-ultraviolet wavelength niche. From its launch on June 7, 1992, until its decommissioning last year, EUVE was "never out of science mode for more than a couple of days," says Brett Stroozas (University of California, Berkeley). "It's been a great spacecraft." NASA extended the mission's 3-year lifespan twice, and early last year scientists led a failed letter-writing campaign to persuade NASA to continue the mission further.