Dusty disks that encircle young stars sometimes host giant gaps. But a new study shows these gaps aren't necessarily the signature of a nearby planet. 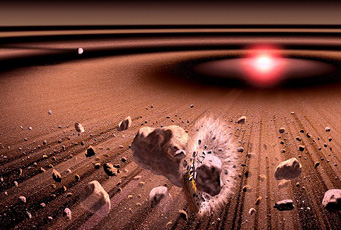 Pictured above is the debris disk surrounding the star Beta Pictoris.

Huge disks of dust and gas encircle many young stars, but not all of them are uniform: some contain eccentric rings in the dust’s emission that make the disks look more like ripples in a pond than a solid pancake. The reason for these gaps
puzzles astronomers. Many thought the gaps were caused by gravitational tugging from a nearby planet. But confirming that these planets exist, as demonstrated by the controversy over the elusive Fomalhaut b, has been tough.

Using detailed computer simulations, Wladimir Lyra (NASA Carl Sagan fellow at Caltech's Jet Propulsion Laboratory) and Marc Kuchner (NASA Goddard Space Flight Center) recreated the ring patterns that appear in both debris disks — formed in older systems by collisions of asteroids and comets (think Kuiper belt) — and the “transitional disks” found in younger systems that are packed with gas. They found that the dust and gas interactions inside these disks can produce the same pattern of gaps that astronomers often attribute to planets.

Stars form when dense clouds of gas and dust become so big that they can’t hold up against their own gravity. As the cloud collapses, the material at the center heats up and eventually becomes a stellar core. The remaining dust from the cloud rotates around the star in a given direction and at a particular rate given by Kepler’s third law of planetary motion. As it spins and collapses, the cloud flattens out into a disk. 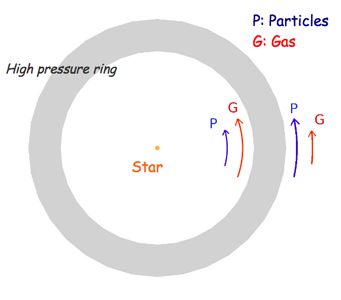 The illustration shows the process by which gas heats up and concentrates the dust, within a circumstellar disks, into rings.

Inside the disk, there’s lots going on. The dust absorbs starlight and casts off electrons, per the photoelectric effect. These electrons collide with gas molecules, which heats up the gas. Since gas has a property that dust doesn’t (pressure), it expands when heated. The expansion accelerates the gas that’s closest to the star inwards. To prevent itself from falling in too close to the star, the gas will have to rotate faster (at a super-Keplerian rate), as shown in the picture at right. That means that the gas is outrunning the dust, which is still rotating at a Keplerian rate. As a result, the dust feels a tailwind and gets pushed outwards into the high-pressure region created by the photoelectric effect.

On the side facing away from the star, the effect happens in the opposite direction. The gas expands and accelerates outward, slows down to compensate, and is outrun by the dust, which feels a headwind and sinks into an inner orbit, once again in the high-pressure region. 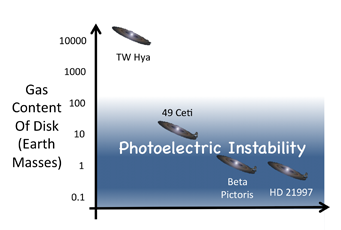 The diagram above shows the range of gas contents for which the Lyra-Kuchner disk gap model should apply.

The models can reproduce patterns for a range of disk types, from the gas-rich ones that contain 10 times more gas than dust or for the gas-deprived that have 1/10th as much gas as dust. It doesn’t work in disks with very high concentrations of gas: the gas blocks out starlight and prevents the dust from heating up, shutting down the photoelectric effect.

If dust-gas interactions can explain disk gaps, then some planet candidates might get kicked to the curb. Recent controversy over whether or not planets lurk in the TW Hydrae and Fomalhaut systems are perfect, though more complicated, examples: TW Hydrae contains more gas than the range covered by these models, and Fomalhaut contains far less.

John Debes (Space Telescope Science Institute), a member of the research team that discovered the gap in TW Hydrae, says the new result is promising. “Our field is very quick to jump on planets being an explanation for the structures that we see, but there are other complex effects and physics that must occur,” he says. “I am completely ok if the gaps we see turn out to be non-planetary in origin.”

But the model’s not perfect. The simulations produce multiple rings and clumps, while the real-life analogues show only a single ring or clump. The effects could be dampened by collisions between the grains, producing one ring instead of many. Or maybe the real rings are in fact a series of ringlets like those in the simulations, explains Lyra. Perhaps these disk gaps are like Saturn’s rings, made up of even smaller gaps that only time and close-up views will reveal.

Another caveat for these models is the shape of the disks. The ring simulations produce gaps with low eccentricities — nearly perfect circles, with eccentricities up to 0.03 or 0.04 at most (a circle is zero, a parabola is 1). Some debris disks match up well with these models, which might mean that any exoplanets suspected to lurk inside them are nonexistent. On the other hand, more oval disks such as Fomalhaut’s (which has an eccentricity of 0.1) are beyond the limit of Lyra and Kuchner’s result. Careful hunts to determine the gas distribution around such rings will help solve the riddle.

You can read Lyra and Kuchner’s paper released in Nature today here.

I hope URL's may be posted here, because this simple demonstration can provide a plausible explanation for the disks.

I would also like to ask, why are the top "experts" in the subject, ignoring what is surrounding us at all times throughout the universe, the electrical / magnetic properties of matter. Yes, the plasma universe thing, try it, it is the KISS model of the universe.

I have no affiliation with this video poster / producer at all.

This report indicates to me that growing tiny dust grains into planets is not easy and has many problems yet to be fully disclosed, at least in popular sources in my opinion.

Yes, how does the universe really make planets? It’s easy to see how planets can grow larger after they have achieved sufficient mass to gravitationally attract nearby material. But how can small grains of dust grow into asteroid and planetesimal sized bodies? In fact the first illustration in this article, rather than showing how planets build up from smaller bodies, is showing how asteroids grow smaller via collisions. The gravitational attraction between small bodies is tiny, and thus the escape velocity is tiny too, so small objects cannot accrete unless they come together very gently. Then the two bodies would be in contact but wouldn’t fuse into a single solid mass and they would easily fly apart if hit by anything with substantial velocity. So, how can planetesimals form? Any suggestions as to the solution?

Assuming that the elemental abundance of the Sun’s photosphere gives a fair indication of what the proto-stellar molecular cloud that our system was formed from then we would have the gasses H2 and He comprising 98.3% by mass of the cloud. All the rest of the heavier elements that the rocky planets are manly composed of were then only 1.7% of this cloud. Therefore the role of all this super abundant gas shouldn’t be ignored. The research being reported upon here moves in this direction, showing how the effects of diffuse gas could help to bunch dust into rings. However, at times even earlier that what is being pictured here wouldn’t it be safe to assume that the gas would have been much thicker in the proto-planetary disk? Imagine the early disk as, not a vacuum, but as an atmosphere wherein the heaver molecules would gently settle out along the orbital plane. Small particles could accumulate in denser regions, and gas pressure would allow clumps of dust to grow. Heat from gas compression and radioactive decay could build up, allowing planetesimals with partial molten cores to form. Planetesimals proliferate and coalesce in this gaseous disk. Meanwhile the sun’s early stellar winds begin clearing the gas from inner solar system, eventually leaving the rocky inner planets we have today. To sum up this idea: Planets form in space, but maybe they don’t form in a vacuum.