Here at Sky & Telescope we get wind of all kinds of reports of meteorite falls. Few are legitimate. But on July 6th the sky really was falling over South America, when an incoming object broke apart in the lower atmosphere with a trio of ferocious explosions that shattered windows and shook the ground violently. Moments later, stones rained from the sky and pelted homes in the poor barrios surrounding the notorious city of Cali, Colombia.

Nothing gets the adrenaline of meteorite collectors rushing like a fresh fall, and it wasn’t long before Michael Farmer and Robert Ward flew south from Tucson, Arizona, in search of cosmic treasure. After reaching Colombia, they teamed up with local amateur astronomers and headed into the barrios to try to recover some of the fragments. 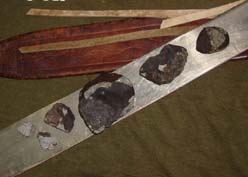 After a few days of searching, they’d rounded up and purchased several small pieces — some of which had smashed through the roofs of homes — totaling about 270 grams (10 ounces).

But not all of their exchanges with the locals were pleasant, as word got out that some gringos with money were in the area. Farmer explains:

“As we tried to drive through a barrio just near where one of the stones was found, a man ran at our taxi with a large gun screaming at us to stop. I saw the people in the front of the taxi duck down and then saw the gunman running at us. The driver hit the gas and we swerved around him, but the gun was about 1 meter from my head. He did not fire, thank God, but what a scare!”

Now safely back in Tucson, Farmer estimates that the Cali event must have dropped fragments far more massive than what he and Ward were able to collect. Unfortunately, it all ended up in dense cane fields and will never be found. And although the recovered “hammer stones” turned out to be a rather common type of chondritic (rocky) meteorite, they’re already fetching thousands of dollars per gram among meteoritic aficionados.

To learn more about the prizes and perils of meteorite hunting, check out Farmer's account of his adventure.

Kelly,
Besides armed peasants, meteorite collectors visiting foreign countries may run afoul of the authorities. Many countries, mostly in Europe and Central/South America have "national treasures" laws. These laws make it illegal for people to export artifacts that represent either the culture or the history of the nation, The would-be collector is supposed to obtain a licence from the ministry of culture (or similar department). I don't know that meteorites fall into that category, but you never know.

The last sentence, which contains a link to "Farmer's account", is broken.....

Can someone point me to a link for Farmer's version of events that's good?

The link is OK now — thanks for noticing.