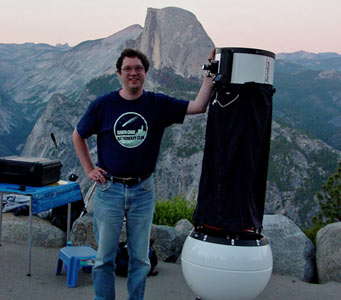 Fienberg is retiring from the magazine after 22 years to become visiting scientist in astronomy and astrophysics at Phillips Academy in Andover, Massachusetts. He'll continue to write and consult for S&T as a contributing editor.

Naeye (pronounced "NOY-uh") is no stranger to S&T readers. He first joined the staff as an editoral intern in 1991, then came back as a senior editor from 2003 to 2007. He most recently served as a senior science writer at NASA's Goddard Space Flight Center in the Astrophysics Science Division.

One might say that Naeye never really left S&T, since his work has continued to appear regularly in the magazine's pages. In fact, Naeye wrote the cover story, "NASA's New Gamma-Ray Trailblazer," in the June 2008 issue going on newsstands today.

In a press release Kent wrote:

"This is a highly successful magazine and a brand that is recognized by serious amateurs and professionals in astronomy throughout the world, so this change is important, particularly after the successful and stable leadership Rick Fienberg has provided. Bob Naeye is without question the right choice because, in addition to his qualifications as a writer and editor, he has worked with our team in the past, which means he knows the magazine and its people. He is at the same time someone who brings the perspective of an 'outsider,' which means he can respect the traditions of this great title without being hidebound to them, and he sees the opportunities we have going forward. We get freshness in a package that is familiar, and that doesn't happen often in this business."

Some of Naeye's honors and accolades include the David N. Schramm Award for Science Journalism from the American Astronomical Society's High-Energy Astrophysics Division, and the Professional Astronomer of the Year Award from the Astronomical Association of Northern California.

Naeye will officially take the reins at S&T on June 2nd.