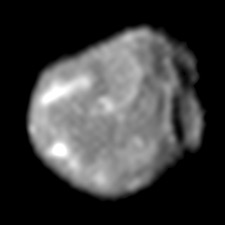 Jupiter's red-tinged moon Amalthea has an amazingly low density, leading scientists to believe it is actually a loosely-bound ball of broken boulders.

The Galileo orbiter has provided yet another insight on one of Jupiter's moons, this time from its November 5th flyby of Amalthea. It seems that the 270-kilometer-wide moon isn't actually a solid body. Rather it is an agglomeration of rubble held together by gravity.

Galileo scientists made the discovery by first taking the most accurate measurement of Amalthea's mass yet, which was derived fromthe gravitational pull the moon had on the craft. Next, by dividing that mass result by the moonlet's estimated volume, a team led by John D. Anderson (NASA/Jet Propulsion Laboratory) determined that the Amalthea's density is slightly less than water's at 0.99±0.25 gram per cubic centimeter. Although the result is still preliminary, it suggests that Amalthea's volume is dominated by empty space — assuming the moon is rocky, not icy.

"It's probably boulder-size or larger pieces just touching each other, not pressing hard together," said Anderson in a prepared statement.

Amalthea's ultra-low density casts into doubt a long-held theory about Jovian moons. Models have suggested that moons closer to the planet are denser than those further out, because Jupiter's initial heat of formation would have baked away any low-density ices that gathered in close-in moons. "Fluffy" volatiles only exist further out.

The theory holds for Jupiter's four largest moons — Io is the innermost and most dense, Callisto is the outermost and the least dense. But Amalthea is clearly less dense than rocky-iron Io despite being closer to Jupiter than the volcanic moon is. A possible solution is that Amalthea was indeed baked but became a rubbly mess because it was completely shattered by impacts. Over time the fragments of the collisions reassembled as the loose pile of rubble we see today.

What remains unclear is just how the empty space in Amalthea is distributed. The term "rubble-pile" can be misleading, says William Bottke (Southwest Research Institute, Colorado). There isn't enough information to know if Amalthea is, as Anderson suggests, a group of boulders loosely held together, or more like a ball of sand. The question is one of porosity. "We just don't know if this is dominated by micro or macro porosity," says Bottke.

Galileo's 8-year-long mission officially ends on September 21, 2003, when the craft will plunge into Jupiter.