The ringed planet has been making news for a hurricane at its north pole, digestive troubles in its interior, and "rain" of water ice from its rings.

Right now our solar system's signature ringed planet is putting on a show. Saturn reached opposition just two days ago, so it rises at sunset and takes all night to arc across the sky.

But I'm not referring to that kind of show, as beautiful and visually satisfying as telescopic views of Saturn might be. Instead, I mean Saturn's performance for planetary scientists: it's been in the news three times recently. 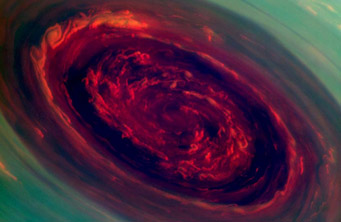 This close-up of a spinning, hurricane-like vortex around Saturn's north pole resembles a deep red rose of giant proportions surrounded by green foliage in this false-color image from NASA's Cassini spacecraft. Three infrared channels were used; green hues denote high clouds and red hues those lower down. Click here for a larger version.

Two days ago, the Cassini imaging team released dramatic views of the planet's north pole. Seasonal change happens slowly on Saturn, which takes 29½ years to circle the Sun. So ever since equinox came and went in August 2009, sunlight has been gradually getting stronger around the north polar region.

The waxing northern spring has allowed Cassini scientists to resume their tracking of the "hexagon," a broad, wave feature centered at 76° north that has six straightish segments. Roughly two Earths across, the hexagon has been around at least since its discovery in 1981 by Voyager 2 and appears to be a fast-moving jet, though the exact cause remains a mystery.

The researchers had hoped to gain some insight by seeing what lies in the hexagon's center, at the north pole, and the surprising answer is … a hurricane! Its ring-shaped "eye" spans some 1,250 miles (2,000 km), 20 times larger than its counterparts on Earth. Winds moving around the outer edge are racing at 330 miles (530 km) per hour.

It's unclear what's driving this vortex of motion or how long it's existed. On Earth, hurricanes are powered by heat drawn from tropical ocean water. The one at Saturn's north pole "is somehow getting by on the small amounts of water vapor in Saturn's hydrogen atmosphere," notes Andrew Ingersoll (Caltech) in a NASA press release.

Cassini took these revealing images when it glided over the north polar region last November 27th at a distance of 260,000 miles (418,000 km). Especially dramatic is the "red rose" close-up created from images taken at three near-infrared wavelengths. Seen at right, the blue channel corresponds to light at 890 nm, green at 728 nm (sensitive to high-altitude clouds), and red at 752 nm (sensitive to low clouds).

Meanwhile, closer to Saturn's equator, another investigation has turned up evidence that water derived from the rings is raining into the planet's upper atmosphere. This process had been suspected for decades — especially after Cassini found evidence when it arrived in 2004 that the rings are immersed in a tenuous water "atmosphere" but confirmation took a while. In the April 11th issue of Nature, James O’Donoghue and seven others describe infrared observations of ionized trihydrogen (H3+) in Saturn's ionosphere made two years ago with the Keck I telescope. The observers expected to see an even glow across the planet, induced by a steady bombardment charged particles from Saturn's magnetosphere. Instead, they found a series of bright and dark bands at the middle latitudes of both hemispheres. 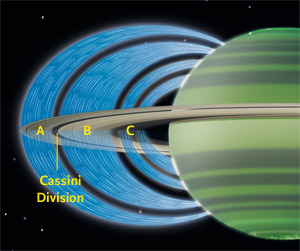 This artist's concept illustrates how charged water particles flow into the Saturnian atmosphere from the planet's rings, causing a reduction in atmospheric brightness.


NASA / JPL / Space Science Inst. / Univ. of Leicester
Apparently, water molecules from the rings are being ionized by sunlight and then travel along magnetic field lines into Saturn's upper atmosphere, where they "quench" the expected infrared emission by reacting with H3+. The ionospheric glow is strongest at the locations that map back to two big "holes" in the rings — the Cassini Division and Colombo Gap — where icy ring particles are sparse.

As the team explains in a Keck Observatory press release, this banding effect is not seen in the ionosphere of Jupiter. That's likely because the Jovian rings are far more tenuous and contain little water.

Observers have long realized that Saturn's entire globe has a healthy infrared glow, thanks to roughly 1017 watts escaping from its interior. All the solar system's planets have radiated heat as they've gradually cooled over 4½ billion years, but Saturn's glow is brighter than it should be for a planet of its age. For decades, the most reasonable explanation seemed to be that helium was separating from hydrogen in the planet's deep interior, "raining out" toward the core as droplets that liberate energy as they descend.

But maybe that's not the right explanation. Jérémy Leconte (Laboratory of Dynamic Meteorology, Paris) and Gilles Chabrier (University of Exeter, England) think Saturn's youthful glow comes about because deep-seated layers of dense gas prevent the internal heat from making its way outward efficiently. Instead of traveling via giant "conveyor belts" of buoyant gas, the heat must diffuse outward — and that takes longer.

"Our calculations show that Saturn appears young because it can’t cool down," Chabrier noes in an Exeter press release. "These separate layers effectively insulate the planet and prevent heat from radiating out efficiently. This keeps Saturn warm and bright.”

Helium rainout is probably still happening, Leconte and Chabrier note in the April 21st issue of Nature Geoscience, but it probably can't account for all of Saturn's infrared excess. Jupiter and Neptune also release a tremendous amount of internal heat. But Uranus, a curious planet in many ways, does not.

Infrared emission from the Jovian planets is a combination of incident solar energy (blue arrows), some of which is scattered back into space by the planetâ€™s atmosphere (dashed), and heat flowing out from the planetâ€™s deep interior (red). No interior heat has been detected coming from Uranus.

Good article on the new goings-on with Saturn and an interesting alternate reason why Saturn has so much internal heat.

When talking about the charged water flow in the Saturnian system, I believe you mean to call H3+ either a trihydrogen cation or a protonated molecular hydrogen and not ionized tritium. Tritium consists of a proton and 2 neutrons and is radioactive. I think what you are describing is 3 protons chemically bonded with 2 electron around it (hence the positive charge).

To my knowledge, the element having 3 protons (plus 3 neutrons most frequently) is defined/ called Lithium. Tritium, instead, is Hydrogen (meaning: having 1 proton), but with 2 additional neutrons (thus, a different isotope), having 3 nucleons altogether, which is why it is called "Tritium" ("Deuterium" has only 1 additional neutron). And, yes, ionized to 1+, meaning 1 of the 3 electrons is missing. When I was in school (admittedly approximately 50 years ago) we used to put the proton number as a subscript to the right of the element shorthand, and the total nucleons (= protons + neutrons) as a superscript, also to the right. In case of a charge, we'd put that as an additional superscript behind the total number of nucleons. Don't ask me how often that convention could have changed over the years! But I'm pretty sure the hard facts are still the same.

David, Mike: thanks -- I stand (or type, anyway) corrected!

At the core of each planet lies a natural nuclear reactor. Earth's core is at 5-6000C and the NNR, or rather NNRs, are what power hotspots such as the Siberian Traps - Iceland one and continental drift. It's already known that Jupiter emits more energy than it receives from the Sun, energy that has to originate from within its core. Saturn too, ought to have a similar, if lesser, energy output profile. Did anyone check for the He3/He4 ratio?

That is not a hurricane. It is the rotational axis of the planet. “It's unclear what's driving this vortex of motion or how long it's existed. ” No it’s not; it’s perfectly clear: the rotation of the planet is driving it, and said axis of rotation has existed since the planet formed.

I quote the article,
"Our calculations show that Saturn appears young because it can’t cool down," Chabrier noes in an Exeter press release. "These separate layers effectively insulate the planet and prevent heat from radiating out efficiently. This keeps Saturn warm and bright.”

If Saturn looks warm and bright in the infrared due to a high rate of heat escape, how can we conclude that it looks young and hot due the insulation qualities of the layers deep in the atmosphere?

Saturn is obviously trying to ignite into a star.

I may be wrong, but there is not necessarily a contradiction here. If Saturn had NOT had its insulating layers trapping its residual heat, it would have cooled down more rapidly to the point where there would be no heat flowing from its interior - as is the case with Uranus. However, thanks to these insulating layers, Saturn has retained its interior heat producing the observed heat flow.

Compare it to a bucket full of water: tip it upside down and the water will be gone in an instant whereas punching a tiny hole in the bottom would produce a small trickle lasting ages.