Phoebe has long been regarded as the black sheep of Saturn's major satellites. For starters, it's got a retrograde orbit — in other words, it travels backward compared to its sibling satellites. Moreover, it's quite dark and lies on the outskirts of Saturn's gravitational grip, 8 million miles (13 million km) out. All of this has dynamicists thinking that Phoebe might have been captured by Saturn long ago.

Just 135 miles (215 km) across, this oddball now has another claim to fame: a ring of its own. Yesterday, at a meeting of planetary scientists in Fajardo, Puerto Rico, Anne Verbiscer (University of Virginia) announced that Phoebe is responsible for an enormous, diffuse ring that envelops its orbit. The band shows up faintly in scans of the Saturnian system taken last February by the Spitzer Space Telescope’s Multiband Imaging Photometer (MIPS). 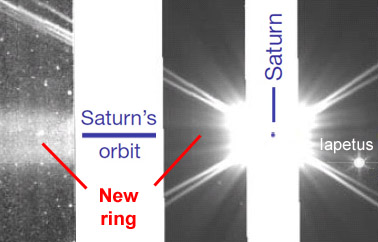 Three scans from NASA's Spitzer Space telescope reveal a tenuous ring far from the planet Saturn. Click on the image for a larger view.

Collaborating with Virginia colleague Michael Skrutskie and Douglas Hamilton (University of Maryland), Verbiscer was trying to identify the source of the black-as-soot dust that coats the leading hemisphere of Iapetus, the two-faced moon inward of Phoebe that has perplexed astronomers ever since its discovery by Giovanni Domenico Cassini in 1671. "The dark/bright asymmetry on Iapetus was the main motivation for our search," Hamilton notes. The team wasn't sure the dust from Phoebe would be visible, he explains, "but it was certainly worth taking a look!"

The Spitzer scans, made at the deep-infrared wavelengths of 24 and 70 microns, reveal a tenuous belt near Saturn's equatorial plane that's far larger than any of the planet's other rings and tipped 27° with respect to them. According to Verbiscer, the thick band seems to envelop the region 2,300,000 to 11,200,000 miles from Saturn (30 to 150 times the planet's diameter). But it wasn't seen as far out as 15,000,000 miles (200 diameters), making Phoebe the logical source. Either meteoritic impacts are constantly blasting bits off of the moon's surface, or a single modest impact knocked away the equivalent of 1 cubic kilometer of material. 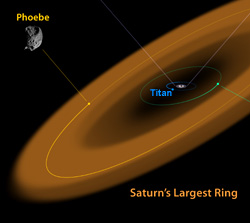 Saturn's newest halo is tilted 27° to the main ring plane and encompasses Phoebe's orbit. Both the ring and Phoebe orbit in the opposite direction of Saturn's other rings and most of its moons, including Titan and Iapetus. Click on the image for a larger view.

However they escaped Phoebe, countless tiny dust grains are being dragged toward Saturn by subtle gravitational and radiational forces. As they spiral in, they're intercepted by the next moons inward, particularly Iapetus and (probably) Hyperion. "This dust is striking Iapetus like bugs on a car's windshield," Hamilton observes, confirming Phoebe dust as the cause of Iapetus's dark half.

However, Verbiscer cautions that the black-as-coal hemisphere not just a dusty coating raining out of the sky, because Phoebe and the dark side of Iapetus are not a spectral match. Instead (or in addition), the hypervelocity peppering could be causing ice on Iapetus's surface to erode and disappear over time, leaving behind what little dust might have been already mixed in with it.

Verbiscer, Skrutskie, and Hamilton report their findings in the October 8th issue of Nature. NASA's press release about the discovery is here.

The real question is how long can Saturn rings exist and are they evidence of a much more recent origin? Data like this suggest the rings are recent and maintaining Saturn rings over some 4.5 billion years may be difficult.