Versions of the saying "All things come to those who wait" have been around for nearly 500 years.

NASA's Cassini spacecraft has been orbiting Saturn for only 5½ years, but in that time this remarkable craft has had occasion to pass near many of the planet's 61 moons (six of which were discovered in its images). It's an amazing bunch of bodies — variously big and small, smooth and cratered, gas-gushing and quiescent. 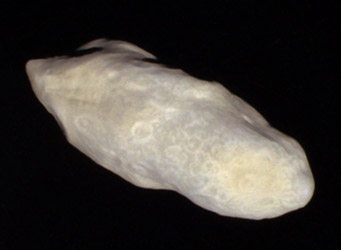 But the close-up of Prometheus seen here represents new territory, in a sense. This elongated body, just 74 miles (119 km) long, has an alien quality to it. Note how all the edges are rounded and the craters are filled in. We're just not used to seeing moons (or asteroids) with such muted features. Heck, I've seen potatoes with more detailed surfaces — but no mere spud has ever fascinated me nearly as much as this picture does!

Discovered in 1980 by Voyager 1, Prometheus and like-sized Pandora are the F ring's gatekeepers, "shepherd satellites" that circle just inside and outside the faint ribbon of dust. Their gravitational influence confines the F ring, keeps its particles from dispersing, and gives a tortured appearance.

But all this gravitational jostling forces each moon into a very slightly eccentric orbit, one part in 450 (0.0022) for Prometheus and one in 240 (0.0042) for Pandora. The slight orbital eccentricity causes Prometheus to make headlong dives in the F ring once per orbit (every 15 hours) into Saturn's F ring. You'd lose the rough edges too if you endured all that peppering. Pandora, which got its Cassini close-up in 2005, looks somewhat the same — though not nearly as blanketed in ring dust.

I'll bet that Carolyn Porco, the lead scientist for Cassini's imaging team, finds this picture particularly satisfying. As a young scientist on the Voyager mission, she specialized in the gravitational interplay of rings and moons. While there's been no shortage of amazing sights to grab her attention throughout Cassini's long-running romp, I suspect that right now she's thinking long and hard about how this funny little moon, along with its buddies Pandora and Atlas (the A ring's shepherd), came to be.

Thanks for the great blog! Actually, I did think ...about 4 years ago...about how Prometheus and the other ring region moons came to be. And I even published a paper on it in 2007. My co-authors and I figured that since accretion can't occur spontaneously in the ring region, they must have started with a shard of material -- perhaps a left-over from the breakup of a pre-existing moon -- that is denser than the ring material itself. And then, accretion filled out the moon to its present size.

Your readers might want to read the paper at ...

It's one of my papers that I'm most proud of. It makes a nice story.

Happy New Year to you, Kelly, and all your readers,
Carolyn Porco

I submitted a comment about 20 minutes ago. Did you get it?

I bet that the smoothness of this Saturnian moon is due to 'weathering'. I.e., my 'guess' that because Prometheus is so close to the small particles of debris in Saturn's ring system, that its surface has been smoothed out by millions of tiny impacts. This would be much like the rocks on a beach getting smoothed by the ocean's constant ebb and flow, drawing sand particles across their surfaces. But it just my guess. I'll wait for experts like Carolyn to find the truth.

The process of accretion is exciting, but how does it start and when does it end? Prometheus is now 74 miles (119 km) long. Is it still accreting from material from Saturn's F ring? This is not just a question for this particular mooon, but for all bodies in the solar system including our planet Earth. How did Earth reach its size and mass? What process turned off the accretion?

Happy New Decade to all!

I ain't no proficient Astronomer, not even Amateur,
but the shape of Prometheus would seem indicate,
like Arizona Mountains, an erosion pattern which erased
softer material and left a core.

I wonder if Earthly Water and Wind have a commonality
with gravity in matters such as this. Makes me want to
head to the IGA for a tub of Sour Cream . . .

I have not yet read Dr. Porco's 2007 paper, so my observations here are made in ignorance of her team's model. I hope there is enough spectral data to make some reasonable inferences about the surface materials; the variation in the image is interesting. The craters strongly resemble the nearly filled-in "ghost" craters on our moon. The long, narrow dark streaks emanating from a small crater near the upper left remind me of the lunar crater Messier A. The brightest parts of the crater rims could be a lighting angle effect. It is tempting to assume that the lower right edge is the dominant forward-moving "side" (what do we know about its rotation axis/axes?). I expect the leading "side" might be more shaped by weathering/abrasion and the trailing side affected more by accretion. The "nose" certainly looks like polished ice with a "fluted" ring (ring particle abrasion?) and a slightly eroded "neck" (on one side, anyway) followed by a "conical" accretion region. Of course, it is easy to make hasty and incorrect inferences from one image.

Regarding James Fullerton's query concerning the orientation of Prometheus:

I suspect that Prometheus, being so deep into Saturn's gravity well, has a gravity-gradient orientation like Mars' two natural satellites. This means that the long axis of Prometheus would be pointed toward Saturn.

I also suspect that in this image the right-hand "nose" is the outward-facing one and that the left side of the satellite is the leading hemisphere. This particular image orientation would be the only one which would place Cassini outward of the ring system. (If the right-hand "nose" were the inward one then the image would have been taken from a spot above or perhaps even inward of the F-ring itself. But the Cassini managers are, I suppose, very chary of placing the craft anywhere near one of the visible rings.) 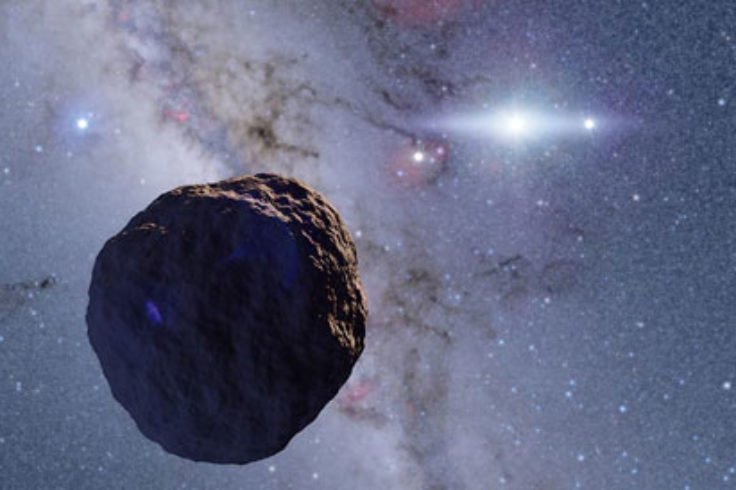