After years of failure, astronomers have finally succeeded in imaging primeval clouds of gas like those that existed before there were stars. 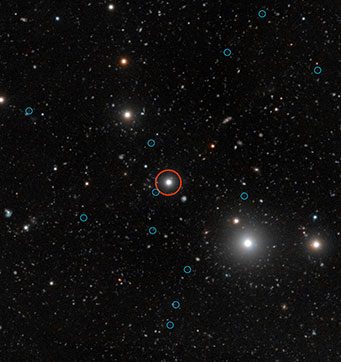 The quasar at the center of the image (circled in red) illuminates dark galaxies (circled in blue) in its neighborhood. The galaxies are "dark" because they're starless, but they fluoresce faintly under the quasar's brilliant light.

The universe used to be a dark place. Clumps of hydrogen and helium gas filled space; so did clumps of dark matter, the mysterious stuff that makes up most of the universe’s mass. Astronomers have long supposed that gravity pulled primordial overdensities of stuff into the blobs that formed the first galaxies. But neither neutral gas nor dark matter shine, and in smaller, less dense clouds, stars haven’t had a chance to ignite. So until recently astronomers had no way of detecting these crucial building blobs to test theories of galaxy formation.

Now astronomers are illuminating these “dark” primeval gas clouds using the brilliant ultraviolet light from quasars, distant searchlights powered by supermassive black holes. Sebastiano Cantalupo (University of California, Santa Cruz) and his colleagues proved this technique can work by observing glowing clouds around a quasar, whose light took 10.9 billion years to reach one of the 8.2-meter scopes of the Very Large Telescope array in Chile.

“The light from the quasar makes the dark galaxies light up in a process similar to how white clothes are illuminated by ultraviolet lamps in a night club,” study coauthor Simon Lilly (ETH Zurich) explains in an ESO press release.

This process is called fluorescence: when a hydrogen atom in the gas cloud absorbs the quasar’s ultraviolet light, it later emits light with a specific, longer wavelength of 121.6 nanometers. The wavelength stretches as the light travels across expanding space to reach Earth, so that by the time it reaches us the light is observed as a shade of violet.

Cantalupo and his colleagues found 98 sources glowing this particular shade of violet around the distant quasar. Since some of these sources might produce light on their own by forming stars, the team carefully analyzed the data to eliminate star-forming sources. They were left with 12 likely “dark galaxies” — dense, starless clouds of gas fluorescing in the quasar’s light.

Zoom-in views of the 12 dark galaxies (circled in green) discovered by Cantalupo and his colleagues. Though they lack stars, they're faintly illuminated by the quasar's light.

Until now studying galaxy formation has been a bit of a puzzle because astronomers could not observe the initial ingredients that ultimately go into forming galaxies bursting with stars.

“It is a bit like studying human populations without ever having seen a pregnant woman,” says Paul Francis (Australian National University), a quasar researcher not involved in the study. “This is a new technique and as it is developed, it should tell us a lot about where galaxies come from.”

Both Francis and other astronomers have tried using the quasar technique to detect dark galaxies before, but only with the VLT scope’s sensitivity, very long exposure times, and advances in blue-sensitive imaging has the technique become viable.

The 12 clouds found by Cantalupo’s team are already teaching astronomers about the process of galaxy formation. Each gas clump is as massive as a billion Suns, but the clouds are so small and diffuse that turning their gas into stars would take 100 billion years — a rate 200 times lower than typical, massive star-forming galaxies of roughly the same age. As these smaller clouds collide, their densities would go up, eventually gathering enough material together to form galaxies. At that point, the blobs’ mostly unused gas reserves would provide the material the galaxy needs for star formation.

Very interesting but the statement "...observing a quasar 64 billion light years away..." couldn't possibly be correct. Is that a typo in the article?

I read the press release and this report. What I did not see or missed, was a spectrum able to be taken of the gas clouds? Primordial gas before stars formed would be the stuff of Population III stars, H, He, and perhaps a little Li but no other metals like C or N according to the big bang model and BBN. I did not see the Fe/H ratio either.

Since a single frequency of light produced by fluorescence of Hydrogen was all that was measured the 'spectrum' would consist of a single emission line. There would be no information about other elements. With even more light gathering power some similar method could probably be devised to detect Helium. Lithium would be even harder, since there's only a little bit of it. Maybe with the even larger telescopes currently being planned....

"And the earth was without form, and void; and darkness was upon the face of the deep. And the Spirit of God moved upon the face of the waters." Well, with no oxygen yet in existence, there could be no actual water, so this has to be taken metaphorically. So the confirmation itself must also be metaphorical. (Also, I think you meant 'once' not 'ones'.)

Why don't you use comoving radial distance? That's the distance to the quasar "now". A light travel time of 10.9 billion years corresponds to a comoving radial distance of about 19 billion light years. Every simple cosmological calculator shows you that, for example
http://www.astro.ucla.edu/~wright/CosmoCalc.html
or
http://www.kempner.net/cosmic.php

Thank you, Dr. Beyvers for the good suggestion and the useful applications, and for rescuing the discussion from the realm of the ridiculous.

Bruce, interesting comments you posted. I point out something here. There are earlier reports of pristine gas clouds from the big bang in the report, 'Astronomers Find Clouds of Primordial Gas from the Early Universe, Just Moments After Big Bang', http://www.sciencedaily.com/releases/2011/11/111110142050.htm. This report indicated widespread metal variation throughout the universe in high z number objects. The particular gas clouds reported had Fe/H = -4.0 which is very low metals. Another report for GRB 090323 spectrum reveals early galaxies enriched in heavy elements contrary to big bang model expectations - 'Observations of Gamma-Ray Burst Reveal Surprising Ingredients of Early Galaxiess', http://www.sciencedaily.com/releases/2011/11/111102092929.htm. I feel the quest for true Population III stars and primordial gas from the BBN phase of the big bang model remains elusive.

Hey Rod, the data from the discarded 'dark' sources may contain some clues from population III sources. It would be interesting to sort through the discard pile.

The original article (link below) seems to say, that the objects reside at z=2.4, and are nearly 10kpc across:

then, if they ever became galaxies, with M/L ratios of 100-1000 (characteristic of most small galaxies)...

and, then, on the parameter-space plot, provided as Fig.2.24 of "Galaxy Formation & Evolution" by Mo,Bosch,White...

those objects "ought" to become maximal dSph (or maybe minimal dE) galaxies...

which characteristically are only ~1kpc across (and are gas poor, i.e. "dry")...

Perhaps maybe all this indicates, that Dark Clouds collapse by an order of magnitude, decreasing in radius 10x, as their gas is converted into (some mass fraction of) stars ? 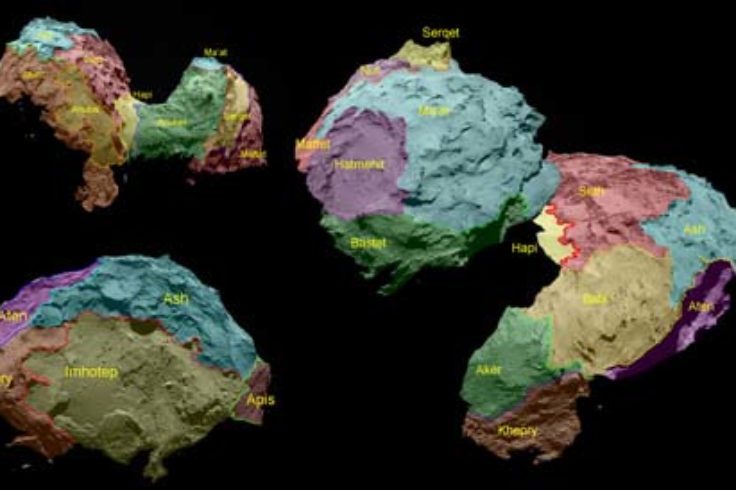 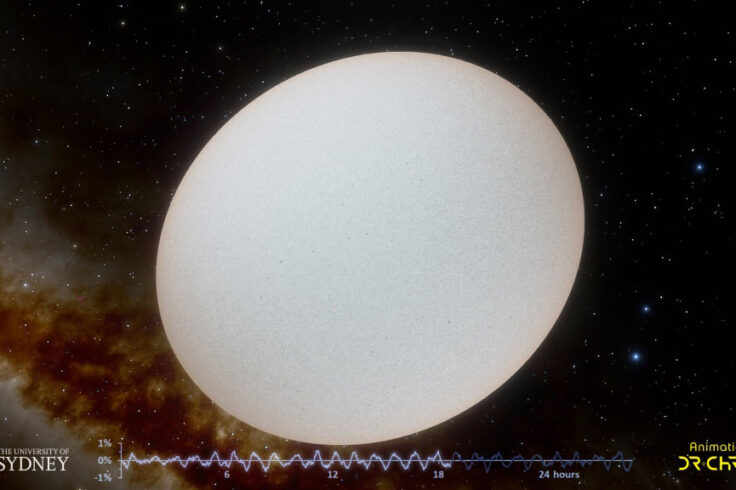 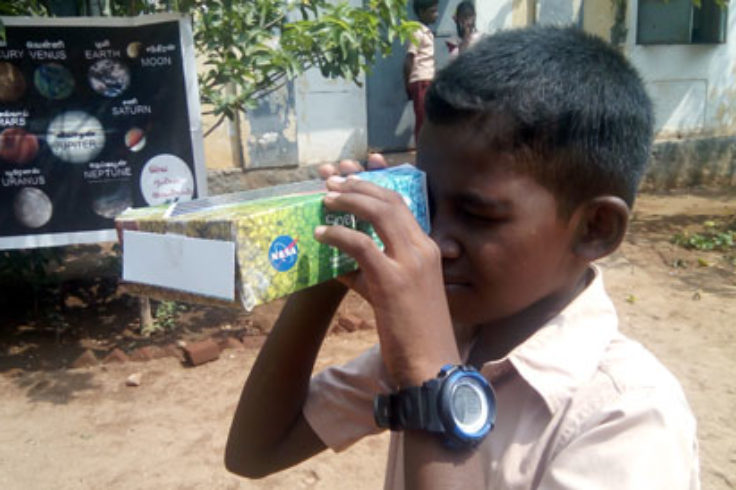