Senator Vows to Fight for Hubble 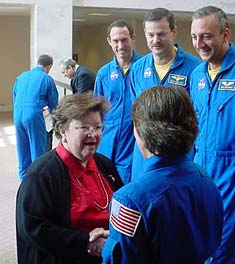 Amid new rumors that NASA plans to abandon the Hubble Space Telescope (HST), a powerful US senator has vowed to continue fighting to keep the observatory operating. Senator Barbara Mikulski (D-Maryland), one of Hubble's staunchest supporters in Congress, wasted no time before responding to reports that NASA's budget for fiscal year 2006, to be made public on February 7th, contains no money to repair and upgrade the telescope.

"It is essential that we have a safe and reliable servicing mission to Hubble," Mikulski said in a statement distributed to reporters on Friday afternoon, January 21st, just hours after Space.com published comments from unnamed sources suggesting that NASA cannot afford to service Hubble again. "I will continue to advocate for this mission: I led the fight to add $300 million to NASA's budget last year for a Hubble servicing mission, and I plan to lead the fight again this year," Mikulski pledged. "This is what the American people expect and deserve."

This is just the latest chapter in a controversy that has been raging for a year now, ever since outgoing NASA administrator Sean O'Keefe announced in January 2004 that he was canceling the next Space Shuttle mission to Hubble out of concerns for astronaut safety. When many astronomers, congressional representatives, and members of the public reacted with outrage, O'Keefe relented and agreed to service Hubble again if it could be done robotically.

On March 9, 2002, the Hubble Space Telescope was released back into free flight by the astronauts of the shuttle Columbia, who completed a series of repairs and upgrades over the preceding 5 days.

The National Research Council (NRC) was called in to examine the pros and cons of such an approach and concluded in December 2004 that Hubble was too important to let die in orbit. The panel of outside experts recommended that NASA proceed with a shuttle mission to Hubble as originally planned, saying that the robotic alternative is too complex and unlikely to succeed before the telescope succumbs to the loss of its remaining batteries and gyroscopes.

O'Keefe, who announced his resignation just days after the NRC report was released, has not commented on the latest rumor, and nobody at NASA has come forward to confirm it. But one agency insider told Sky & Telescope that even if the rumor is true, Hubble's fate is far from sealed. NASA has a lot more flexibility in its budget now, thanks to the agency's newly granted authority to move money around internally. Congress used to specify how every dollar was spent.

"Rumors like this sometimes are just trial balloons," says a NASA astronomer on the Hubble project. "This agency has found a way to pay for four prior servicing missions to HST. It can do it again."