What do Joe DiMaggio, Elvis Presley, and Lucille Ball have in common? They've all been featured on U.S. postage stamps. And what do Apollo 11, the Viking landers, Skylab, and Mariner 10 have that the Pluto-bound New Horizons spacecraft doesn't? You guessed it: each has a stamp to call its own. 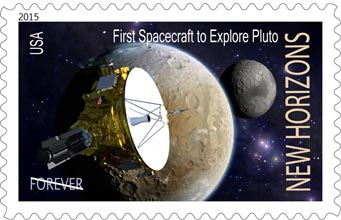 But things might change if the mission's scientists have their way. Led by principal investigator Alan Stern and colleague Dan Durda (Southwest Research Institute), they're rounding up support for a stamp that shows New Horizons zipping past Pluto. The online petition they've started urges the Citizen Stamp Advisory Committee to recommend just such a stamp to the Postmaster General.

A talented space artist, Durda has even produced convincing "concept art" for the proposed postage, though the U.S. Postal Service will commission its own artwork if the stamp is approved

"The nation has an opportunity to honor a truly exemplary accomplishment of humankind in general, and the U.S. space program in particular," note the petitioners. Pluto has made it onto a U.S. stamp before, back when it enjoyed full planetary status, but that was way back in 1991 — and the tag line reads "Not Yet Explored". 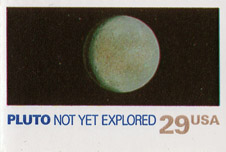 This U.S. stamp is one of a set of 10, issued in 1991, that featured planetary bodies in our solar system.

It's not like Pluto was intentionally being ignored, but getting a spacecraft there hasn't been easy — technically or politically. Back in the 1990s a Jet Propulsion Laboratory team led by Robert Staehle tried to make it happen, but NASA managers canceled the effort in 2000 before construction could begin.

After many machinations, the New Horizons effort was approved in November 2001. "Ten years ago," Stern says, "I promised Rob Staehle that after launch we'd apply for a stamp," and now he's made good on that promise.

New Horizons will sweep past Pluto and through its four-moon family on July 14, 2015 — the 50th anniversary of Mariner 4's historic first flyby of Mars. It's hard to believe that New Horizons has already covered more than 3 billion miles since departing Earth in 2006, and that its rendezvous with Pluto is just 3½ years away.

That's why the petition needs to be submitted soon, because the glacial process of getting this stamp approved and issued might take three years, by which time the spacecraft will be closing in on its objective.

The petition has just gotten under way, and so far it's only garnered 2,500 signatories. But Stern expects to reach his 100,000-name goal. Between now and March 12th, when the drive ends, Stern wants readers of S&T.com to do three things: "Sign the petition, tell your friends to sign, and have your friends tell their friends to sign."

This is a fabulous way to raise funds! Using Pluto, with all the discussions about it still swirling around, is most excellent!
The more we can show our support for space, particularly at this time, in our own solar system, the more we give inspiration to all humankind, especially our children!
Let's make Pluto a postage stamp!
Kudos to those who thought this idea up!

For such a noble mission New Horizons deserves a stamp. Now, let's give Pluto back its proper place in the solar system. Designating it a non planet has raised a lot of confusion amongst the populace.

A great idea, which I'm all for, but a little worried about two things. What if the probe fails before it gets there? (It could happen.) I don't think you'd want a stamp advertising a failure. Maybe if it did happen to fail, and the stamp was approved, issue could be cancelled? I know they want to start the process now so that the stamp will be out around the time the probe arrives at Pluto (which never should have been considered a real planet, due to it's Goofy orbit) but the difference between it and everything else you listed is that the stamps were approved after the mission (or person) was deemed a success. Secondly, this is an internet petition. Some times they work, maybe, but if you really want to get results, phone calls and/or written letters are better. Since this is the USPS that has to be convinced, I recommend letters.

As Tom said, this should not only wait until the mission is successful, but shouldn't it wait until we can use an actual picture of Pluto on the stamp?! Perhaps that is the intention of this process, but that has not been clearly stated. In case there's any question, I'm against it before we can use an actual picture and I'm 100% for it if we can! 🙂

Whether Pluto is still a major planet or minor planet, it hsas been a fascinating subject. Exploring it is an extraordinary achievement considering the distance involved. Certainly there should be a special commemoration stamp for this special occasion.