Sky & Telescope's September 2011 issue is now available to digital subscribers. Some print subscribers have already received it, and it's officially on-sale at newsstands starting August 2nd.

I have to admit that this is my favorite S&T issue yet this year. Usually there are a few articles that are relevant to some segment of our audience, but don't really speak to me. Not this time! 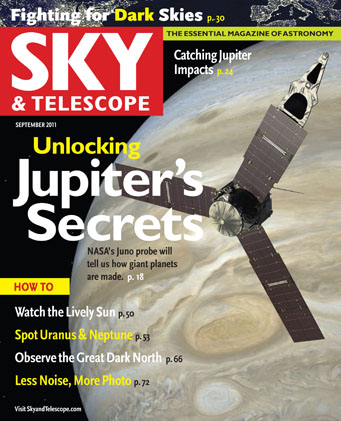 Take the cover story about the Juno probe. This August, if all goes well, Juno will start a 5-year odyssey to the Jupiter. When it arrives, it will make our first dedicated study of the giant planet itself. Why does this matter?

Well, taking our solar system as a whole, there are really only two important bodies: the Sun and Jupiter. Maybe I'll allow Saturn as an also-ran, but all the other planets are just specks of foof. Jupiter contains most of the solar system's angular momentum and almost all the mass that isn't locked up in the Sun. It's amazing and enigmatic. It emits far more energy than it receives from the Sun, it's an intensely bright radio source, and it's surrounded by lethal radiation bands. It's thought to consist mostly of liquid metallic hydrogen, an exotic material that's predicted by theory but has never actually been observed. Most theories posit that it has a solid core, but so far there's no evidence one way or the other.

Juno should change all that. It will study Jupiter's magnetic field and radiation belts in detail. It will use microwaves to probe deep into Jupiter's atmosphere. And subtle fluctuations in its orbit may prove or disprove the existence of a solid core — a question critical to the formation of the solar system as a whole.

While we're on Jupiter, there's a great profile by Greg Bryant, editor of Australian Sky & Telescope, on Anthony Wesley, the amateur planetary imager who achieved great fame last year by discovering two asteroid impacts on Jupiter. That's two more than professional scientists found, and two out of the three impacts on planets other than Earth that have ever been observed. 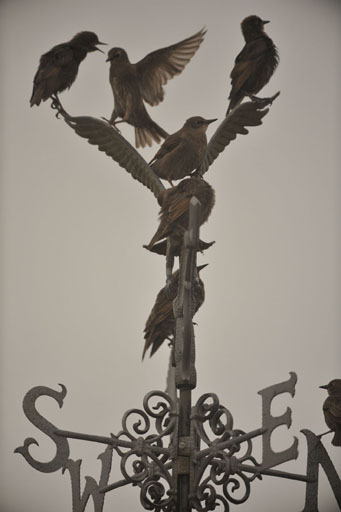 I was also fascinated by Dennis di Cicco's test report on the David H. Levy Comet Hunter, a new 6-inch Maksutov-Newtonian telescope from Explore Scientific. I have a weak spot for Mak-Newts. In some ways they seem like an impractical design — after all, you could get a first-rate Newtonian for half the price and then put a 2-inch coma corrector on the back instead of a 6-inch one up front, as in the Maksutov design. However, good Mak-Newts have captivatingly clean, sharp images all the way from ultrahigh to ultralow magnification. Refractor-like, as the saying goes. And when you compare a 6-inch Mak-Newt against a 6-inch refractor, it's a bargain indeed.

More to the point, Dennis clearly fell in love with this particular instrument. It's the details that make a great scope, and in this case almost all the details were designed thoughtfully and executed brilliantly. And the review allowed him to exercise his greatest talent: photography. Not just the usual astrophotos, but the picture above of birds cavorting on a weathervane outside his office. Isn't it a beauty?

Speaking of photography, I loved this issue's image-processing article, by Ruben Kier. For once it's not going deep into esoteric techniques but rather giving an overview of the fundamentals — signal-to-noise, exposure times, stacking, dark frames, flat frames. I know all this stuff, but it's a pleasure to see it explained so clearly, thoroughly, and concisely.

Gosh, I haven't even gotten to the observing articles, the real reason that this is my favorite issue. But I've written enough, so to find out about these, you will either have to buy the magazine or read our online Table of Contents.