Sky & Telescope's August 2011 issue is now available to digital subscribers. It has already started to ship to print subscribers, and is officially on-sale at newsstands starting June 28th. 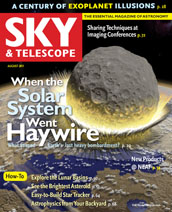 The Late Heavy Bombardment is one of the two great surprises that emerged from the space race to the Moon during my childhood. The first was when the Soviet probe Luna 3 photographed the far side of the Moon and revealed that it looks totally unlike the near side. Who would ever have guessed? The other is the timing of the lunar craters. This had been suspected before but was spectacularly confirmed when rocks brought back by the Apollo astronauts were dated.

There are lots of craters on the Moon, and a few of them are known to be relatively young, notably Tycho and Copernicus. So we must be looking at a globe that has gradually acquired ever more craters, at a fairly steady rate, ever since it was born -- right?

Wrong! Almost all those craters were formed about 3.9 billion years ago, in a single burst less than 100 million years long. There's nothing special about the Moon, so no doubt Earth and the other planets experienced a similar barrage. What could have caused the Late Heavy Bombardment, as this event is known? That's the topic of Emily Lakdawalla's cover article in the August issue.

English amateur Robin Leadbeater measured the redshift of the quasar 3C 273 with a 9-inch telescope and a modified low-light security camera.

I am primarily a visual observer, but I occasionally dabble in astrophotography. So two articles on instrument-based observing caught my eye. First is Tom Field's "Spectroscopy for Everyone." I knew that amateur astronomers have been using spectroscopes for many years now, but I didn't realize how far the field has progressed, and how cheap and (relatively) easy spectroscopy can be.

Why does this matter? Spectroscopy is arguably the second biggest advance in astronomy after the invention of the telescope. (Astrophotography itself is the only other contender.) It's what made theoretical astrophysics possible, and to a large extent, it's still the main thing that separates the professionals from the amateurs. It's fairly easy to spot the quasar 3C 273 through a backyard telescope, but how can you tell that it's actually a quasar rather than a foreground star, other than taking your star atlas on faith? You can't — unless you have a spectroscope.

The other astrophotography article that intrigued me was Gary Seronik's "Simple Hinge Tracker." I've done a fair amount of DSLR photography, but mostly on a fixed tripod, which seriously limits my exposure times. I occasionally piggyback on my equatorial-mounted telescope, but that mount is a monster, which discourages casual use. But Gary's "barn-door" tracker seems so incredibly easy (and cheap) to build that I really don't have many further excuses for not doing so.

There's also a great wrap-up of the 2011 Northeast Astronomy Forum and the imaging conference that precedes it. Plus a charming historical piece on the long history of discovering exoplanets that turned out to be non-existent on close scrutiny. And the usual great observing articles, including a Deep-Sky Wonders column on well-known and obscure objects in Scutum and Aquila and a Going Deep on a single field of view in Draco that contains three wildly different bright galaxies, plus plenty of faint ones.

Click here to see more about the August issue.

A great article by Tom Field and an inspiration to many.

We need more articles on spectroscopy for amateurs. An in depth article on the LHires III would be great.

We are honored to have you as an inspiration to beginners in this field of science. Many thanks.