Sky & Telescope's October 2011 issue is now available to digital subscribers. Some print subscribers have already received it, and it's officially on-sale at newsstands starting September 6th. 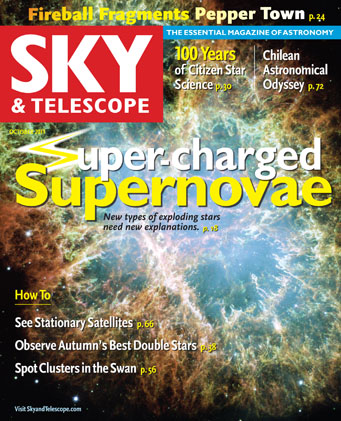 The cover story of the October issue is about supernovae and supernova impostors. I already knew that supernovae were complex and confusing. But it turns out they're far more complex than I had imagined.

The trouble all started when surveys started picking up supernovae 10 or even 100 times brighter than normal — too bright for conventional theories to explain. Even more confusing, their spectra and light curves indicated that they operated on some fundamentally different principle from "normal" supernovae. And then it turned out that some of them had already exploded before. How could this be? According to conventional theory, a supernova destroys the parent star — so how can a star go supernova twice?

No, I'm not going to give away the plot here. If you want to find the answer to this conundrum, you will have to read the article. 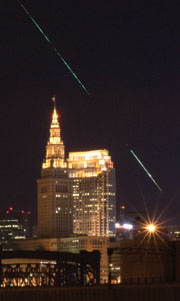 The 2009 Grimsby fireball appeared bright even from Cleveland, Ohio, 150 miles away.

Another fascinating science-sleuth story is about the fireball that exploded over southern Ontario in 2009, scattering meteorites in the town of Grimsby. The thing that makes this fireball special is that it happened over one of the world's best networks of all-sky meteor-monitoring cameras. So from first detection to recovering actual fragments, this meteor has been characterized much more accurately than any other ever seen. Scientists know exactly how it hit the atmosphere, where it exploded, and where it finally flared out (19 km high, in case you're wondering).

There's also a great story about observing geosynchronous satellites — something I'd heard of but never attempted myself. Did you know that there are so many geosynchronous satellites that it's possible to get several in a single telescopic field of view? Or that many of them appear up to 100 times brighter near the spring and autumn equinoxes? Neither did I — but now I do.

And I loved the article reviewing the history of the AAVSO (American Association of Variable Star Observers) as it approaches its 100th anniversary. It may be just my American bias — or my Cambridge, Massachusetts bias — but I've always thought that the AAVSO, in many ways Sky & Telescope's older sister, is the world's preeminent example of regular citizens doing valuable astronomical research.

That's just a taste of the riches in the October 2011 issue. To find out more, read our online Table of Contents.