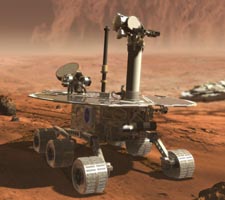 With a mass of roughly 180 kilograms, NASA's Mars Exploration Rovers will be able to trek up to 100 meters per day during their three-month explorations. Each lander carries a suite of five instruments, collectively called Athena, and an abrasion tool for exposing fresh surfaces on rock faces.

NASA's return to the surface of Mars got underway this afternoon with the launch of the first of twin robotic vehicles that will trundle across the landscape of the red planet. After two postponements because of threatening weather, the first Mars Exploration Rover lifted off from Cape Canaveral aboard a Delta II rocket at 1:58 p.m. Eastern Daylight Time. The second rover is scheduled for launch on June 25th.

On June 8th, NASA announced the names for the two Mars buggies: Spirit and Opportunity. Nine-year-old Sofi Collis, a 3rd grader from Scottsdale, Arizona, suggested the appellations in an essay. Her submission was the winner from among nearly 10,000 entries in a contest sponsored by NASA, toymaker Lego Co., and the Planetary Society.

When these 180-kilogram (400-pound) vehicles land on Mars in January, they will be able to travel as far as 100 meters per day, and will not have to remain close to their landing spots. Sojourner — the first Mars rover in 1997 — couldn't stray far from the Mars Pathfinder lander before being out of range from broadcasted instructions. These robots will communicate directly with antennas on Earth, or will have data relayed home via NASA's Mars-orbiting spacecraft: Mars Global Surveyor and Mars Odyssey.

The landing sites lie on opposite sides of Mars. Spirit will land in a large, sediment-filled crater called Gusev. Opportunity will head for the flatlands of Meridiani Planum. The rovers are expected to remain operational for 90 Martian days.