I'm in Orlando, Florida, this week, covering the annual meeting of the American Astronomical Society's Division for Planetary Sciences. You don't realize how many people study the planets for a living (about 3,000 worldwide, I reckon) until you get a bunch of them together in one room! Although the meeting's topics cover everything from Mercury to the Kuiper Belt — and even the planets of other stars — the focus of this one has been what's new and exciting in the more distant regions of our solar system. 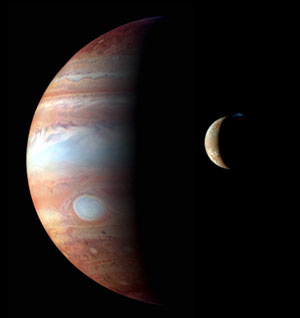 This week researchers are presenting results from the scrutiny paid by NASA's New Horizons spacecraft when it passed Jupiter earlier this year. This view is a composite of images taken on February 28th and March 1st showing the false-color planet in infrared light and the volcanic moon in near true color.

Yesterday a whole series of presentations described what NASA's New Horizons spacecraft found when it zipped past Jupiter back on February 28th. It's been a few years since Cassini made a similar flyby, and in both cases these were far more than courtesy calls. Cassini needed a gravitational boost from the giant planet to speed it along to Saturn. And New Horizons — already the fastest spacecraft ever launched from Earth — got a swift kick that will cut its travel time to Pluto by three years.

New Horizons's dash through the Jovian system also provided a crucial full-up dress rehearsal (and the last chance to do so) prior to reaching Pluto on July 14, 2015. The mission's team crammed more than 700 observations of Jupiter's atmosphere, rings, satellites, and magnetosphere into the six-month-long encounter window, and team leader Alan Stern proudly noted that the spacecraft executed 98% of them as planned. (One instrument shut itself down briefly when it overdosed on high-energy radiation near the planet.)

Even though this marked the eighth time a spacecraft has visited Jupiter, it's still a rush to see the king of planets and its big moons up close. Back in February the outbreak of stormy weather in Jupiter's North Temperate Belt hadn't yet occurred, but there was still plenty to see. Lots of images targeted the planet's southern hemisphere and the Little Red Spot (as the scientists here now refer to it) in particular. Views of the night side intended to monitor auroral glows serendipitously captured flashes from titanic lightning bolts near both poles.

And then there's ever-dynamic Io, which never fails to impress me. The instruments on New Horizons captured volcanic eruptions at many different wavelengths. One particularly strong gusher, called Tvashtar, had an umbrella-shaped plume that towered some 200 miles (350 km) high.

I can't do justice here to all the results — and especially to all the great images — that New Horizons gathered. (Well, I could, but do you really have time for a recap of 40 gigabytes of data?) So head over to the mission's website to look over the highlights at leisure. Or check out this week's edition of Science magazine, which carries a series of articles summarizing the flyby's results.