According to a decision made last week, the world's largest radio telescope will not be built solely in South Africa or Australia — but instead portions of it be placed in both countries, with South Africa getting the lion's share.

Earth's atmosphere isn't transparent to very much of the electromagnetic spectrum aside from visible light, but most radio wavelengths do reach the ground. And that's been a boon to astronomers, who over the past few decades have gotten better and better at collecting radio energy from the distant cosmos via ever-widening arrays of dishes linked through interferometry.

Now, having cut their teeth on interferometric projects like the VLA, VLBA, MERLIN, and the still-growing ALMA, they're preparing to take radio astronomy to a whole new level. Conceived in the 1990s, the Square Kilometer Array (SKA) would comprise thousands of individual dishes on multiple continents linked, Borg-like, into a single instrument with a total collecting surface of nearly 1 square kilometer — nearly nine times the footprint of the U.S. Pentagon. 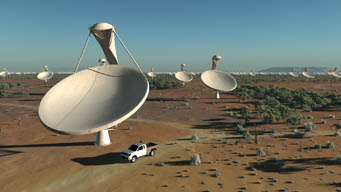 The heart of the planned Square Kilometer Array will be thousands of relatively small antennas clustered around a central core in South Africa but positioned up to thousands of miles away.

The project's international partners are Australia, Canada, China, Italy, New Zealand, South Africa, The Netherlands, and the United Kingdom, but it's been understood for years that the eventual core complex would be built either in South Africa or Australia — countries with lots of wide-open, radio-quiet territory and astronomy-friendly governments. A mix of classic radio dishes, mid-frequency arrays, and low-frequency arrays are envisioned to provide continuous frequency coverage from 70 megahertz to 10 gigahertz.

Earlier this year, the SKA's site-selection advisory committee (SSAC) reported that South Africa had the stronger proposal. So it came as an unexpected surprise when, on May 25th, the SKA Organization announced that both countries would get a portion of the project.

Most of the dishes in SKA's first phase of construction (beginning in 2019) will be built in the arid Karoo area of South Africa, where a prototype array called MeerKAT is already in place. Other dishes will be added to an existing array called ASKAP in a desolate tract of Western Australia.

"All the dishes and the mid-frequency aperture arrays for Phase II of the SKA will be built in South Africa," the announcement continues, while the low-frequency aperture-array antennas for Phases I and II will be built in Australia and New Zealand. Each dish, about 40 feet (12 m) wide and 50 feet (15 m) tall, will use an offset Gregorian design like those in the Allen Telescope Array. 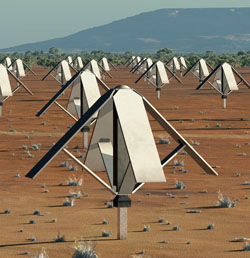 Inclusive sharing or consolation prize? The SKA's array of low-frequency receivers will be built in remote Western Australia.

Officials Down Under seem happy to have been allotted a portion of the spoils — "This is a fantastic outcome for Australia," beams Megan Clark, who heads the research organization CSIRO. But her South African counterparts seem disappointed by the split decision. "We had hoped the unambiguous recommendation of the SSAC would be accepted as the most sound scientific outcome," laments Naledi Pandor, South Africa's minister for science and technology. "We accept the compromise in the interest of science and as acknowledgment of the sterling work done by our scientists and the excellent SKA project team."

It's easy to appreciate why the array's siting was hotly contested. When completed (or if completed: the total cost is $2 billion), the SKA will have 50 times the sensitivity and 10,000 times faster throughput than the best existing arrays. Astronomers hope to harness all those antennas to tackle five key science questions and many others, including how the first stars and galaxies formed, map the locations and distances of a billion galaxies, and divine the role played by dark energy in accelerating the expansion of the universe.

The SKA could, in principal, as one project page boasts, detect an airport radar on a planet 50 light-years away. Hmm… with that kind of reach, I wonder what reality shows the inhabitants of planets around Vega are watching these days?

Above the second picture the text "#checkImageURL( )" is visible. (I hope the parsing and display of the comment doesn't mess that up.)

Also, those lucky residents of planets around Vega will be seeing TV from 1987 such as Punky Brewster and the first season of Married with Children. They won't yet have started to suffer through reality TV.