Our state-of-the-art representation of the entire celestial sphere lets you explore the stars above as never before.

As Sky & Telescope celebrates its 75th year of publication, we editors look back at the January 1993 issue as a milestone of particular note. That's when we introduced a radically new portrayal of the month's all-sky chart, replacing black-and-white versions painstakingly drawn by the late George Lovi and carried for 25 years. The new charts, in full color and far more photo-realistic, incorporated Roger Sinnott's computerized plotting and his new algorithm for sizing the "dots" to show stars' relative brightnesses. The new maps also used refined "stick figures" for the constellations that are uniquely Sky & Telescope's.

Nearly a quarter century later, those distinctive all-sky charts and their derivatives used elsewhere in the magazine still help untold thousands of stargazers find their way around the night sky.

In early 2015, Roger and I huddled with Illustration Director Gregg Dinderman to flesh out a bold idea: could we use the S&T star charts as the basis for a globe of the entire celestial sphere? We knew the project would require lots of effort, yet the more we looked around, the more we realized that no one offered the detailed yet affordable star globe that we envisioned. And so, with a green light from management, we set to work.

The first question proved the most basic: should we portray the sky as if Earth were at the globe's center? This "God's-eye view" would be geometrically correct, but it would mean that all the constellations would have a left-for-right flip that would render them "backward" as seen in the sky. Or should we use an "inside-out" scheme, so that the constellations "looked right" at the expense of geometry? In the end, we chose the latter.

Roger already maintained an exhaustive database of stars and deep-sky objects, and after a few iterations we settled on the characteristics of background color, star size, and other details that looked best. Then came the most difficult part: rendering the sky in the exacting map projection used by our partners at Replogle Globes. Months of back-and-forth work ensued. Gregg fussed with the grid to ensure a perfect fit, while I obsessed over star names and other labels.

Finally, in early April, Sky & Telescope's Celestial Globe started rolling off the production line at Replogle. The result is a pleasing balance between providing details that observers frequently require and preserving an aesthetic rendering that showcases the inherent beauty of a star-filled night sky. We think this is the clearest, most accurate, and most comprehensive portrayal of the night sky available in globe form. Here's a rundown of the carefully chosen details and characteristics:

• Scale: The globe's 12-inch (30-cm) diameter provides a scale of 1° = 0.1 inch (2.7 mm). It sits freestanding on a plastic base. Note that, unlike some other celestial globes now on the market, this one is not illuminated — what you see is what you get.

• Ecliptic: An orange line shows the ecliptic (the Sun's path among the stars), with tick marks denoting every 10° of ecliptic longitude and sunburst symbols marking the Sun's mean position on the first day of each month.

• Constellation boundaries: Dotted lines indicate the boundaries for the 88 constellations established by the International Astronomical Union in 1930 and precessed to their equinox 2000.0 locations.

• Constellation lines: The stick-figure representations, which connect stars within a given constellation using three distinct line weights, are Sky & Telescope's interpretation of classical figures and elements of those used by H. A. Rey in his groundbreaking book The Stars: A New Way to See Them (1952).

• Stars: The globe plots 2,934 stars, the faintest of which are visual magnitude 5.5. The star sizes utilize Sky & Telescope's exclusive algorithm for portraying stars in a way that accurately represents their relative apparent brightness. Starburst symbols indicate the 16 brightest stars. Pastel color-coding corresponds to a star's spectral type. Symbols indicate variable stars and multiple-star systems; there's an explanatory key on the globe to show you what's what.

• Star names: The globe includes proper (common) names for 194 stars. These closely follow the names utilized by Sky & Telescope since the 1940s and draw principally from the following sources: "The Pronunciations, Derivations, and Meanings of a Selected List of Star Names" by George A. Davis (Popular Astronomy, January 1944); Short Guide to Modern Star Names and Their Derivations (Paul Kunitzsch and Tim Smart, 1986); and The Bright Star Catalogue (Dorrit Hoffleit, 4th revision, 1982). Also included are 10 names, adopted by the IAU late last year, for stars with known planetary systems.

• Star designations: Bayer (Greek letter) designations are indicated for 551 stars. (For simplicity and clarity, we didn't add Bayer designations to the very faintest stars that have them.)

• Deep-sky objects: The globe includes 109 Messier objects, which are individually labeled by M number; and 109 Caldwell objects, each labeled with its common name, NGC number (with "NGC" omitted), or other designation. Symbols indicate whether the object is a globular cluster, open cluster, galaxy (with its apparent orientation), bright nebula, or planetary nebula. Again, these symbols are noted in the explanatory key on the globe. Click on the image above to get a feel for the wide range of unusual stars and deep-sky objects that have been included.

• Milky Way: Subtle brightened areas correspond to the concentration of stars in our galaxy's central disk in a way that fairly represents how the Milky Way's glow would appear by eye from a dark-sky viewing site.

All in all, we're thrilled with the result. We hope you will be too. Please hop over to Shop at Sky to give Sky & Telescope's Celestial Globe a careful look — and, we hope, to purchase what we expect will soon become another S&T "classic."

Be sure to explore Sky & Telescope's ever-growing collection of maps, atlases, and planetary globes.

Kelly, I am looking forward to the shipment of this interesting S&T Globe--to add to my growing globe shelf.

S&T atlases and globes are simply the best.

Wow! Congratulations! I would like to know what star catalogue you have used to plot these 2934 stars.

hi, MaribuS -- we use our own in-house catalog, which includes info on whether a star is multiple, variable, or both -- as well as its spectral type. clear skies,
Kelly

I received an e-mail notice that the Celestial Globe should be delivered within the next two days. Looking forward to this globe. Have a spot for it on my globe shelf.

S&T Celestial Globe arrived at my front door a few minutes ago. This globe is well worth the price and space it needs on my globe shelf.

For me, the advantage by far is being able to hold a complete celestial map (visual magnitude 5.5) in my hands for appreciation and sharing with others. Colors used on the celestial globe are quite nice. And the Sun's position on the first day of each month on the ecliptic is a useful addition.

Thank you S&T and Replogle. 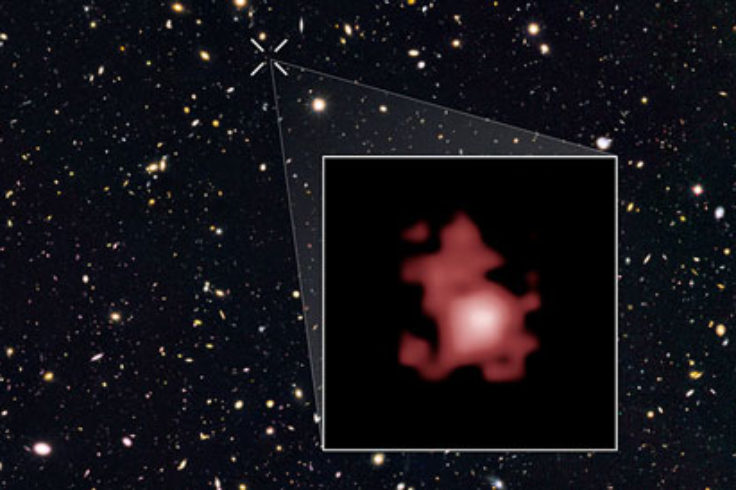 Hubble Finds Most Distant Galaxy Yet