Most of us learn that black holes are such potent concentrations of mass and gravity that everything around them gets sucked in, willingly or not. This should especially true near the supermassive black hole, weighing in at some 3½ million Suns, that lurks at the center of our galaxy.

But within the last decade astronomers have come to realize that swarms of stars are buzzing around that cosmic maw in precariously tight orbits. Many of these appear to be quite massive and therefore young, no older than several million years.

This animation shows the evolution of a massive gas cloud as it sweeps over the supermassive black hole at our galaxy's core. The first two frames are about 6 light-years across and the last two about half that.

Cosmologists have scratched their heads in collective disbelief over this observation. Either these fat stars form elsewhere and somehow migrate inward (improbable, given their youthfulness), or else they condense from great clouds of molecular gas that sweep through the core region. Yet shouldn't the black hole's gravitational force rip the clouds to smithereens as they're dragged to their doom?

Apparently not, based on the results of a new computer simulation that appear in the August 22nd issue of Science. Ian Bonnell (University of St. Andrews) and Ken Rice (University of Edinburgh) followed the evolution of massive gas clouds as they fell into the Milky Way's core. It turns out that some of the gas isn't gobbled up by the supermassive black hole but instead forms an elliptical disk around it — and stars then form in the disk. 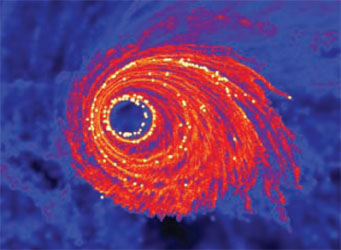 New simulations show that when a gas cloud with 100,000 times the Sun's mass encounters the Milky Way's black-hole core, part of it forms a disk that spawns hundreds of stars. The region shown is about 0.6 light-year across.

Remarkably, many suns end up in orbits no more than 0.1 light-year in radius. And apparently a new burst of star formation occurs whenever a gas cloud dives through the core.

It just goes to show what you can do with more than a year of number-crunching using one of the world's most powerful supercomputers — in this case the Scottish Universities Physics Alliance (SUPA) SGI Altix supercomputer. As Rice notes in an online press release, the key was careful modeling of the gas's heating and cooling during its ordeal. "This tells us how much mass is needed for part of the gas to have enough gravity to overcome its own gas pressure," he says, "and thus form a star."

First off,let me say that this is the very first comment i have ever made about something! I only recently have become part of the www.! I must say i do enjoy your magazine plus other astronomy mags.I wont say here though! No offence! My comment at this time is about your blog(is this right?),Star studded black holes.I have always loved things about space,anything and everything,but black holes just blow my mind!I am sure many of you do as well.Black holes i mean!Here i go:I did not know stars could form around Black Holes,meaning so close to the black hole it self? If stars take,say 2 million years to come together as they circle around the black hole how can they form when all this distruction is happening around them? I do not understand this? I thought everything going towards the black hole is getting ripped apart? Is this not so? If anyone could give me some answers on this subject,I would be very happy to read the response,you have to say to my question! I loved the article and i really liked the computer animation of the black hole in our galaxys core,as you might say? Anyway ,i guess i have made my comment.What say you? Thanks!

Rice says: "This tells us how much mass is needed for part of the gas to have enough gravity to overcome its own gas pressure and thus form a star." This scenario explains star formation in the presence of a black hole, but offers no help at explaining star formation anywhere else in the galaxy. Star formation in dust clouds such as in the Trifid nebula are attributed to molecular clouds, but this offers no explanation for the formation of the first generation of stars, since there were no molecules. The magic wand of dark matter is waved to create the first stars, but since dark matter, along with dark energy, has never been found, we must believe in it with religious faith, which I thought had been exorcised by the priesthood of methodological naturalism. Perhaps some will realize it's time to look beyond the big bang theory.

THE FORMATION PROCESS RESEMBLES THE FORMATION OF SOAP BUBBLES AT THE DRAIN OF AN EMPTYING BATHTUB. THE LIGHTER MATERIAL RIDES THE HEAVIER BUT IS THE LAST TO GO DOWN THE DRAIN. LIGHTER GAS AND EVEN STARS ARE THROWN TOGETHER CREATING EVEN LARGER MASSES WHICH ARE EVENTUALLY PULLED DOWN. IT WOULD NOT ONLY BE GAS BUT ALL MANNER OF MATTER, GRADIENT TO THE MASS BEING DRAWN IN AT THE TIME. NOT A NICE NEAT STAR FORMATION BUT A COSMIC DEMOLITION DERBY.

Consider a black hole as a solution for Ric = 0, a spacetime that is, by definition, empty. Then no "outside bodies" are present by hypothesis. GR is non-linear, so the 'Principle of Superposition' does not apply. It does apply in Newton's theory. One cannot insert lumps of matter into any spacetime of GR by an analogy with Newton's theory. Thus black holes at the centres of galaxies are nonsense. So are black hole collisions, mergers and binaries. Each basic black hole is obtained separately as a solution to Ric = 0. The one black hole cannot therefore be in the spacetime of another black hole and mutually interact in a mutual spacetime that by definition contains no matter. Before one can talk of black hole interactions it must first be proved that the two-body problem is well-defined within GR. This can be done in only two ways, (a) derivation of an exact solution to the field equations for two bodies, or (b) proof of an existence theorem. There are no known solutions to the field equations for two or more bodies, so option (a) has never been fulfilled, and no existence theorem has ever been proven, so option (b) has never been fulfilled. General Relativity has not been able to account for the experimental fact that two fixed bodies will approach one another upon release. SR forbids infinite density because infinite density implies that a material body can acquire the speed of light in vacuo. GR cannot violate SR, and so it too forbids infinite density, and hence forbids black holes. Nobody has ever found a black hole because nobody has ever found an infinitely dense singularity and nobody has ever found an event horizon. It takes an infinite amount of time for an observer to establish the presence of an event horizon, but nobody has been and nobody will be around for an infinite amount of time. http://www.sjcrothers.plasmaresources.com/Unicorns.pdf http://www.ptep-online.com/index_files/2007/PP-09-14.PDF http://www.ptep-online.com/index_files/2008/PP-12-11.PDF