I blame NASA for a lousy night's sleep. 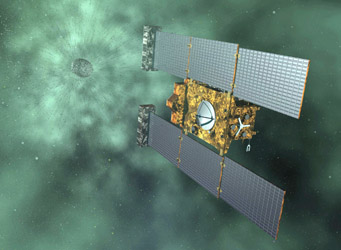 An artist portrayal of the Stardust spacecraft approaching Comet Tempel 1 on February 14, 2011.

Last night the agency's Stardust spacecraft made a close flyby of the periodic comet 9P/Tempel 1. The two were closest, about 110 miles (178 km) apart, for a few moments just before 11:40 p.m. EST (3:40 UT on February 15th). From engineering telemetry, it was clear that the spacecraft had performed exactly as expected. It had turned on cue during the flyby to keep the comet's nucleus centered and snapped frames every 6 seconds as it zipped by at 6.8 miles (10.9 km) per second.

But then I learned that the spacecraft wasn't going to relay its best images to Earth for another a few hours. So I set the alarm for 3 a.m. — only to find out that Stardust had disobeyed orders and started sending the most distant of its 72 close-approach images first. 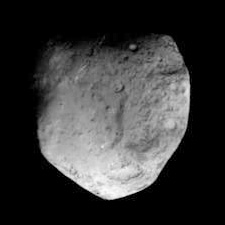 Only this late morning did the most detailed pictures reach Earth, and I quickly forgot about the loss of sleep. The craft's sole camera, pieced together from a spare lens from the Voyager mission and a detector from Galileo, recorded a diverse and structured icescape, including features that have puzzled planetary scientists ever since Tempel 1 got a visit (and took a celebrated wallop) from the Deep Impact mission 5½ years ago. The flyby also recorded a large swath of the nucleus that hadn't been seen during the 2005 visit.

Scientists are most keen to see ground zero for the strike made by Deep Impact's 815-pound (370-kg) copper-core cannonball. The impact released an unexpectedly huge cloud of gas and dust.

It's not obvious to me that Stardust's images show an obvious crater or splash. But to the trained eyes of planetary geologists, telltale hints are evident.

"We did get it, there's no doubt," says Peter Schultz (Brown University), who describes the crater as subdued and about 150m across with a small mound in the center. "It looks as if stuff from the impact went up and came back down," Schultz explains, burying most of the just-formed depression. "It's telling us that this part of the surface is weak and fragile." 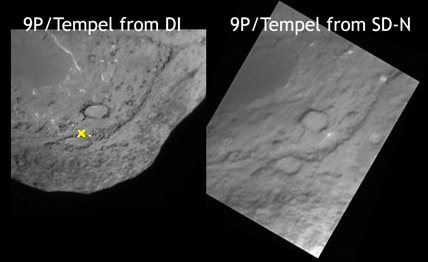 A comparison of an image of Comet 9P/Tempel 1 taken in 2005 shortly before Deep Impact's strike (marked by X) and an image from Stardust 5½ years later. There is no obvious surface disturbance.

That the impact zone was seen at all, with excellent lighting just as Stardust came closest, is a testament to a years-long effort by ground-based observatories to nail down the comet's rotational state and spin rate. This allowed Jet Propulsion Laboratory dynamicists to time the encounter for optimum viewing. (Stardust has almost exhausted the fuel for its thrusters, so there was little margin for error.) By all account the nucleus had rotated to within just a few degrees of where the team had hoped it would be. 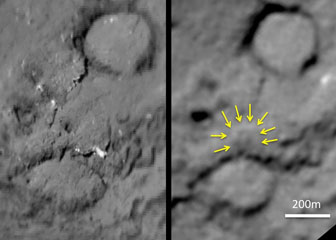 A before-and-after comparison of the part of Comet Tempel 1 that was hit by the impactor from NASA's Deep Impact spacecraft. Left: A composite made from images obtained by Deep Impact in July 2005. Right: Arrows encircle the rim of the crater caused by the impactor. The crater is estimated to be 500 feet (150 m) across, with a bright mound in its center likely created when material from the impact fell back into the crater.

More broadly, as lead scientist Joseph Veverka (Cornell) points out, this is the first time a comet has been seen up close before and after its perihelion with the Sun. Orbiting the Sun every 5½ years, Tempel 1 reached perihelion just a month ago. The science team will closely compare images from Deep Impact and Stardust for changes in the 5-by-3-mile (8-by-5-km) nucleus, particularly a flat tongue of debris, about 2 miles long, that appears to have shrunk since Deep Impact's visit.

Don Brownlee (University of Washington), who guided Stardust's initial science team, comments that the spacecraft's dust detector recorded several thousand hits as it cruised through the comet's tenuous coma of gas and dust. But rather than slowly rising to a crescendo and then falling smoothly, the recorded hits reveal that dust peppered the craft in rapid-fire bursts, a consequence of small "clods" disintegrating into countless smaller flecks after leaving the nucleus.

NASA now can claim two spacecraft that have each visited a pair of comets. Just two months ago, on November 4th, Deep Impact got its second rendezvous with a successful flyby of Comet 103P/Hartley 2. And Stardust's claim to fame was its fly-through of Comet 81P/Wild 2 in 2004, where it snagged dust samples from the coma in a "catcher's mitt" of aerogel that it later dropped off at Earth.

After the wild success with Wild 2, someone at NASA decided it would be clever to rename the spacecraft Stardust-NeXT, adding an appendage that stands for "New Exploration of Tempel" in recognition of its second cometary flyby. (Am I the only one who finds the space agency's name-game annoying? It's gotten really bad the past few years.)

In any case, sending Stardust to a second comet was a bargain, adding only $29 million to the mission's $300 million total cost. The craft will keep Tempel 1 in its sights as the two distance themselves over the next several weeks. But with only a few pounds of propellant remaining, the two-timing comet hunter has little more to give. NASA and Lockheed Martin, which built the spacecraft, plan to end the mission on April 28th.

I'm asking w/ my tongue in my cheek now. Was the spacecraft really "low" on fuel (knowing what wasc known before liftoff) or are you playing on our emotions like the nowaday reality shows play w/ crises?
Really I'm asking so maybe you won't put the teaser in like this one. We're not dummies out here in the hinterlands or are we? I'm just a bit tired of being led around unknowingly like when I watched Walter Kronkite and never questioned his veracity, K?

I have my own strong about the interpretation offered of the impact site. Considering the lighting angle (which comes up from the bottom-right in both Deep Impact and Stardust images of the region), the feature Schultz identifies as a "central mound" is consistent with it being a pit, not a protuberance. To explain its presence, Schultz explained, "It looks as if stuff from the impact went up and came back down". That seems more than a little overstated to say the least, even if that really WAS a mound there. Considering the very low gravitation of the nucleus it's very unlikely that ejecta dust or rubble blasted out would rise up, keep together and fall back in a tidy concentrated mound 50 or 60 meters across. Isostatic rebound is how central mounds form in complex craters, but such a small impact is highly unlikely to have produced complex structure and this feature surely isn't a mound in the first place: if it's a mound, its shadow would fall to the upper-left of the sunlit slope, exactly the opposite of what we in fact see. The other light concentric feature pointed out as the rim of a putative 150-meter crater is only partial, but it is quite evident from Deep Impact images that this region is already occupied by a sunlit scarp. It may have been eroded back somewhat by the impact nearby, but its a stretch to suggest this is the crater rim when a corresponding dark concentric feature of the shadowed interior slope of the putative crater rim is nowhere to be seen to the bottom right, as one is entitled to expect. So that pit (NOT a "mound") is the ONLY feature consistent with the Deep Impact crater, and that makes it 50-60 meters wide, not 150 meters.

Correction: Of course, that would be "my own strong DOUBTS about the interpretation..."

Bear in mind that we tend to interpret shadows as if the sun were from the upper left corner of the photograph (a northwest sun). This used to be a cartographic convention. In the Apollo 11 landing sequence, for example, many of the craters appear to me to be mounds, as the lighting was from the lower right. Rotating the image should help.

There is a pit or mound, ie. a dark shadow, in the indicated location in the pre-impact photo, but the resolution and lighting are not nearly as good in the new one. The images are also not taken at the same angle, so one is stretched or rotated slightly relative to the other. The white spot in the upper right looks intriguing.

Extra weight on a spacecraft is something that is avoided if at all possible, because you need more fuel to launch the extra weight, and more fuel to launch the weight of the extra fuel, etc. Thus if a spacecraft has any consumables, like fuel or coolant, it will only be loaded before launch with enough to accomplish its designed mission plus some modest margin. This is "what was known before liftoff"; the critical phrase here is "its designed mission." Remember that the rendezvous of Stardust with Tempel 1 was not part of its original mission; rather, this visit was added on after that original mission had been successfully accomplished, once the "pilots" decided that there was enough fuel left to perform the second rendezvous. If there was, it might easily have been "just barely enough" because, remember, this wasn't part of the original plan for which the fuel load at launch was calculated. So it's not bad luck that there was barely enough fuel; rather, it's _good_ luck that there was enough fuel, barely or otherwise.

Hey Greg, I'm asking with my tongue in my cheek now, are you just a bit too tired to spell Walter's last name correctly? Why would you think Kelly was not being serious about the spacecraft only having a few pounds of fuel remaining? That situation has occurred quite frequently with many spacecraft and satellites over the years, thus effectively ending the mission and providing a justifiable reason, in many cases, for a follow-up mission.

Does New Horizons’ Target Have a Moon? (Update: Nope) 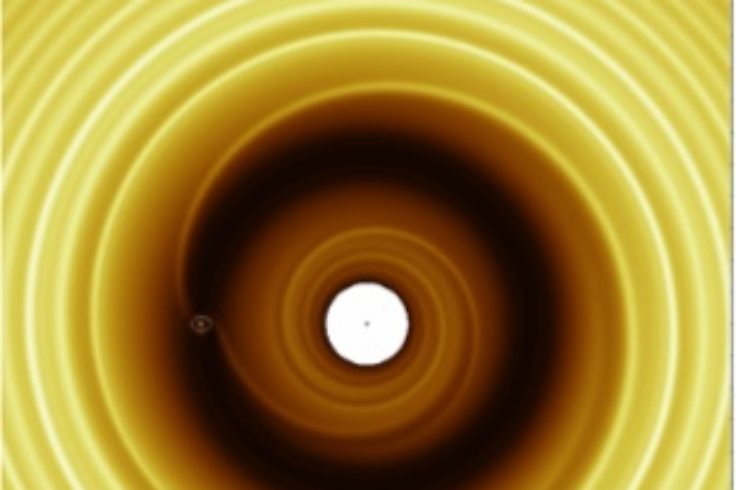