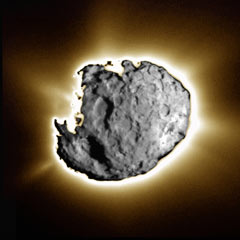 This view of Comet Wild 2 combines a normal image with an extremely overexposed one in the background. Overlaying them this way allows jets of gas and dust to be correlated with features on the comet's nucleus. (The edge that appears fragmented is merely in shadow.)

With all the excitement surrounding the Mars Exploration Rovers since they landed in January, few people realize that another space triumph happened two days before Spirit touched down on the red planet. On January 2nd a spacecraft called Stardust successfully flew by Comet 81P/Wild 2, extended a tennis-racket-shaped collector, and, as its name implies, caught bits of cometary dust to return to Earth. On Tuesday a standing-room-only crowd of researchers at the Lunar and Planetary Science Conference in Houston, Texas, eagerly listened as the Stardust team members shared the early results of the flyby.

The mission's primary goal was to bring back at least 500 particles bigger than 15 microns in size. According to Stardust's principal investigator, Donald Brownlee (University of Washington), "We beat that by a factor of at least a few." The spacecraft also took 72 images of the comet's nucleus from as little as 240 kilometers (149 miles) away, spotting details with a resolution better than 20 meters per pixel. These shots revealed a body covered with scarps, vertical cliffs, and a "monument valley" complete with columns, pyramids, cones, and 100-meter-high spires.

These two views of Comet Wild 2, taken from slightly different angles, can form a 3-D stereo image. Gaze 'through' the screen, letting your eyes relax and separate as if looking at something in the far distance. The images of the comet nucleus should drift and overlap. If you get them to overlap exactly, they will snap into a 'fused' 3-D image. The relief on the comet's surface that you'll see this way is exaggerated. The actual shape of the nucleus, says Stardust project manager Thomas Duxbury, 'resembles a thick hamburger patty with a few bites taken out.'

Stardust's cameras also confirmed that the comet's 5-km (3-mile) wide nucleus is quite active. More than a dozen highly collimated jets of gas and dust were seen spewing from the nucleus, and one of them was clearly associated with a distinct surface feature. Wild 2 is "unlike any other body in the solar system," says Brownlee. "There is no featureless terrain. It's incredibly feature-rich." 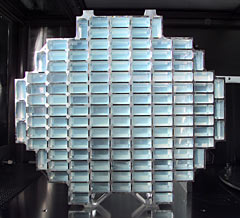 Stardust's collection device is a tennis-racket-shaped 'net' filled with blue aerogel. This strange substance looks like solid smoke; roughly 99 percent of its volume is empty. The front side of the Stardust paddle caught space dust from Comet Wild 2. The back side collected interplanetary and interstellar dust particles earlier in the mission. The particles will be analyzed when the craft returns to Earth in January 2006.

Wild 2 came with other surprises. Most notable was the comet's coma, the hazy cloud of dust and gas that surrounds the nucleus. Astronomers had suspected that as Stardust passed through the coma, its dust-flux-monitoring instrument would detect a smooth increase of particles that would peak at closest approach and recede the same way. That's what the Giotto spacecraft found when it passed through Comet 1P/Halley's coma in 1986. The predictions couldn't have been more wrong. Instead Stardust detected the dust in "clumps," recording sudden bursts of hits followed by lulls. To explain the phenomenon Benton C. Clark (Lockheed Martin) proposed that Wild 2 actually releases mass in "chunks and aggregates that later become dust clouds."

Perhaps the reason is the comet's recent history. Wild 2 was originally in a long-period orbit that kept it far from the Sun. But in 1974 an encounter with Jupiter changed its orbit, bringing it into the inner solar system. Thus, in the past three decades Wild 2 likely experienced fresh stresses and cracks that could have led to the loss of large chunks of the largely pristine icy body.

Stardust did come with some disappointments. Scientists were unable to determine the mass and thus the density of the comet's nucleus. The best they could distinguish from the noisy data was an upper bound of 5 trillion tons. Additionally, the Cometary and Interstellar Dust Analyzer, a mass spectrometer, only recorded 29 events — only a hundredth of what was predicted, says Clark. He suspects that as the craft was being pelted with debris it needed to fire its thrusters to correct its orientation, which might have caused an "unintended shadowing" of the instrument. Bad timing is also possible — perhaps Stardust simply flew past Wild 2 during a period of little outburst activity. The particles that the instrument did see had an organic-rich composition and were deficient in rock-forming minerals. But the CIDA results remain preliminary.

Stardust's sealed sample canister will land in Utah on January 15, 2006. It will be then whisked away to a special lab being constructed at NASA's Johnson Space Center in Houston. There scientists will mine the collected particles looking for embedded gases, ratios of key atomic isotopes, minerals, and organic compounds. 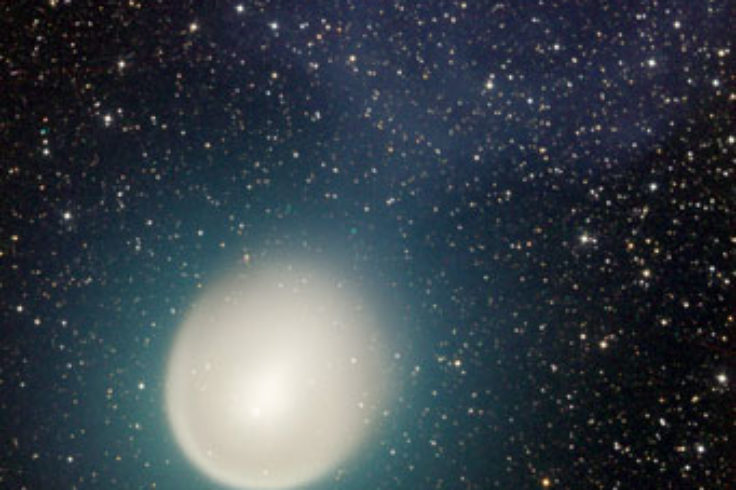 A Different Kind of Acid Rain 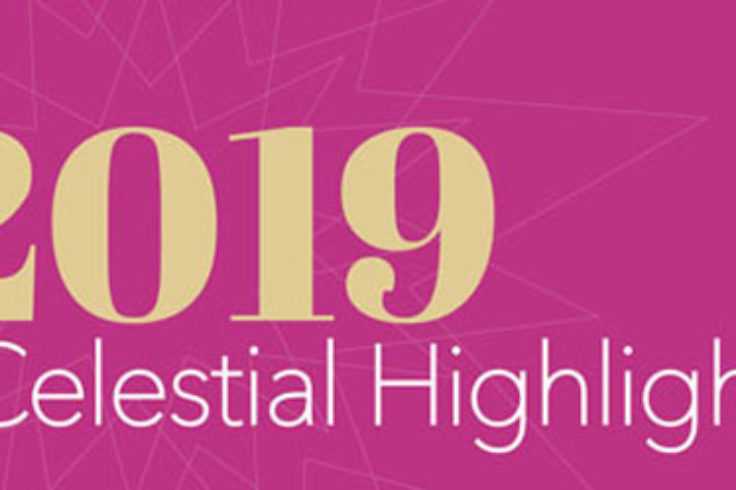